Rays hitters currently own the fourth highest walk rate and the fourth lowest strikeout rate. Which hitters are showing the most improvement in these departments?

The Rays are making more contact while the rest of the league is striking out more frequently, and their walk rate is a shade higher. Overall, their team wRC+ is 107 compared to 108 last year, though last year at this point they possessed a team wRC+ of 99, with walk and strikeout rates of 8.5 percent and 20.3 percent.

Which hitters have shown the most improvement in their walk and strikeout rates thus far?

Matt Joyce has always been one of the more disciplined hitters in baseball, with a career chase rate of 21.9 percent and his walk and strikeout rates have improved over the last three seasons with the Rays. Thus far in 2014, his O-Swing percentage of 14.4 is the lowest in baseball. Accordingly, he's worked one of the highest walk rates in baseball while lowering his strikeout rate. On those rare occasions in which Joyce swings, he's hitting .288 with a .450 slugging percentage.

James Loney's 6.5 percent strikeout rate is the third lowest in baseball behind Victor Martinez and Andrelton Simmons who are leading a campaign against baseball's still-rising strikeout rate. His 9.8 percent walk rate would be his highest since the 2009 season where he walked in 10.7 percent of plate appearances. Loney won't hit for much power, but if he continues to spray line drives all over the field, he will repeat his success from last season. Updated ZiPS and Steamer projections have him finishing with almost identical numbers to those from his 2013 campaign.

Desmond Jennings is striking out more often, but he's also walking more frequently. Combine the beefed-up walk rate with a higher in-play batting average and more power, and Jennings' wRC+ is sitting at 145 compared to his 112 mark in 2013. 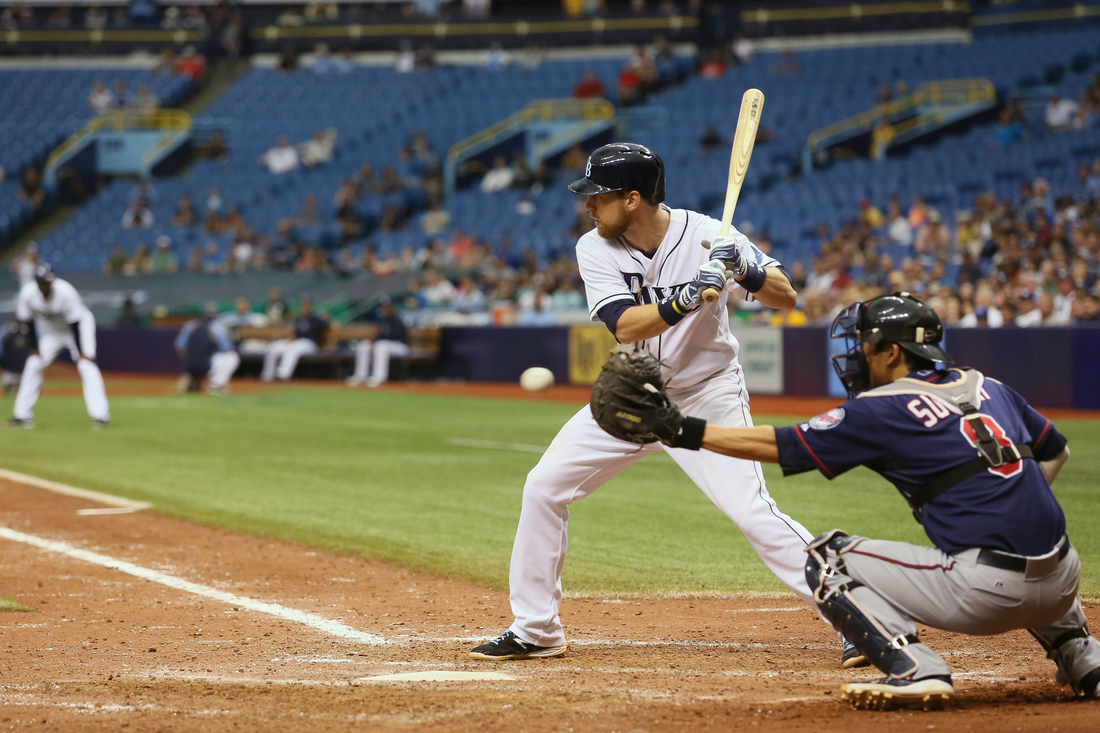 Ben Zobrist is continuing in the same direction that he's been going in for the last couple of seasons. The veteran owns an 11.3 percent walk rate and a 12.8 percent strikeout rate. His power numbers have declined, so perhaps he's trading power for contact. Or, Father Time might be stealing away some of his power, and he's emphasized contact in order to compensate. I suspect it's some of both.

David DeJesus has been a contact hitter over the course of his career, and he draws walks at a slightly higher rate than average. In 2014, he has more walks than strikeouts. It's likely that this is due to the fact that all of his 82 plate appearances have come against right-handed pitching. For his career, the veteran left-handed bat has markedly better walk and strikeout rates against righties than against same-handed pitching. If this platoon usage continues, DeJesus should have a strong year so long as his BABIP fortunes turn around.

Some of these improvements may be outliers, but strikeout and walk rates tend to stabilize more quickly than other offensive statistics. It's early in the season, but it's fair to say that Joyce's walk rate carries more predictive value than DeJesus' .224 BABIP or Wil Myers' .121 ISO. The improved contact rates don't come without consequences, and the Rays are grounding into more double plays than last year. At the end of the season, the Rays walk and strikeout rates will probably help them into the top five in wRC+.