Rays vs. Cardinals, game one recap: Odorizzi gets no support

Share All sharing options for: Rays vs. Cardinals, game one recap: Odorizzi gets no support

I'll admit, I've been struggling to figure out how to watch these Rays. The problem is simple. We Rays fans have been spoiled. You wouldn't necessarily know it by reading the comment sections here, but we've gotten to watch one of the top teams in baseball for the past six years. We're used to every single game mattering in the playoff hint. More often than not, the Rays have gotten the W, which was good because getting the W mattered.

Now, its become uncomfortably likely  (98.5% according to FanGraphs) that this game on June tenth does not matter to the playoff hunt, because there will be no playoff hunt. The team has already lost too many games, and going forward, the team is not good enough to make up the ground. So, how can I, a fan accustomed to games that matter, watch the ones that don't?

Because of option two, I always get psyched about Jake Odorizzi's starts, and tonight the rookie delivered. There were a few hard hit balls that found his fielders, so I won't call his performance dominant, but it was definitely very good. Odorizzi's final line on the night was 104 pitches thrown over seven and a third innings (the deepest he's ever worked into a major league game). He struck out five Cardinals, walked only one, and gave up three hits (two of them singles; one of those an infield single). That one other hit, though, was a problem. 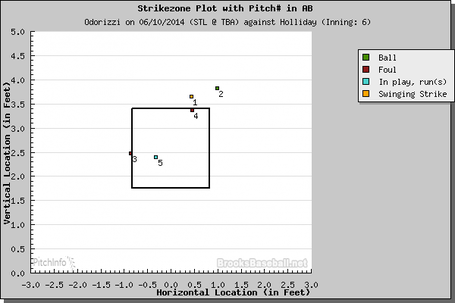 Odorizzi started Matt Holliday off with a fastball above the zone. Odor's four-seam fastball has pretty good rise which makes it a swing-and-miss pitch, especially when it's elevated. Holliday did swing, and unsurprisingly, he missed. Odor then tried to double up on the spot but he brought it too far up and outside and Holliday took the pitch for a ball. The next pitch was a well-located fastball on the inside edge that Holliday fouled off. Odorizzi and Molina returned to the original spot up and away, but by this time Holliday had a better measure of the pitch in that spot and fouled it off once more. Having shown him all fastballs, Molina probably thought that he had Holliday set up perfectly for the split-change. He set up inside and low, asking for a pitch in a location that would make it nearly impossible to put in play.

The pitch never got there. It was the definition of a hanger. As Todd Kalas noted from the booth, it came in at 86 mph rather than the usual 84 mph of Odorizzi's split. It also had less drop and less horizontal run than that pitch usually has, and perhaps because of that lack of movement it stayed over the heart of the plate. Matt Holliday did not miss, lining the mistake well-over the left-field wall.

After dwelling on his worst moment, I want to bring attention to one other aspect of Odorizzi's pitching that I noticed today, and that the PITCHf/x from Brooks Baseball seems to bear out. I'm pretty sure Jake was throwing a cutter. 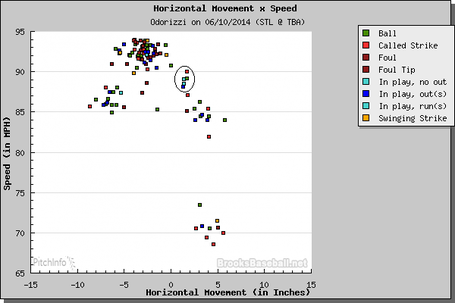 Those are a cluster of pitches with near-fastball velocity but with glove-side horizontal movement (you can't see it here, but they also rose less than his four-seam fastball). I'm in favor of the continued focus on development for Odorizzi. I happen to like his straight, vertical four-seam fastball, but there are very few starting pitchers in the majors today who work entirely off of one fastball. Almost everyone can now cut it, sink it, or both. Having that variation, as long as he can command it, will only help.

When a starter pitches into the eighth inning and only gives up one run, and then turns it over to the back of his bullpen, who give up no runs, that team is supposed to win. Not the Rays, though. Give the often-excellent Adam Wainwright some credit, but this game came down to the Rays inability to get the timely hit. They totaled only eight hits to the St. Louis's three, and eleven baserunners to the Cardinals' four, but none of those came at quite the right time.

The Rays most dangerous inning may have been the fourth when Evan Longoria hit the ball well to left field but Jon Jay was able to track it down and make the catch. James Loney then grounded to a spot near second base that would have been a routine out had not Kolten Wong been playing him deep and to pull. Then something tragic happened. The team that "just needed a liner in the gap" got one off the bat of Ben Zobrist, but with Loney running, third base coach Tom Foley made the [probably correct] decision to throw up the stop sign at third. There would be more and better chances to get the man in, right?

David DeJesus lined a backdoor slider directly at Wong and the Cardinals intentionally walked Matt Joyce to load the bases for Logan Forsythe, who ALSO lined a pitch quite hard but directly to Wong to end the inning.

In the eighth inning, the Rays mounted another rally against the St. Louis bullpen. Kevin Kiermaier grounded off the first baseman and into the stands for a ground rule double. Evan Longoria was hit in the elbow pad, and the pitcher, Pat Neshek, was immediately lifted for Sam Freeman. Lefty on lefty, James Loney got his pitch, a fastball down the middle. He swung hard but he missed, fouling it off. Later on, he swung through a better located fastball to make the first out of the inning. With one out, though, and the go-ahead run on base, the Rays still had a chance. Zobrist hit the ball hard and on a line, but directly at Jay, who only had to come in two or three steps to make the play. Next up, Joe Maddon switched Jerry Sands in for DeJesus, and Mike Matheny countered by inserting his right-handed closer, Trevor Rosenthal.

Although the matchup didn't favor the Rays, Rosenthal grazed Sands's arm with an inside fastball loading the bases for Matt Joyce. A disappointing infield popup ended the inning, and while Yunel Escobar worked a pinch-hit walk in the ninth, Rosenthal closed out the game without much difficulty.