The Rays' bats came alive in the 6-3 victory.

The Rays, stuck in the most pathetic stretch of offense in franchise history, finally hit their way out of it Wednesday night en route to a 6-3 victory over the Cardinals.

Their franchise record streak of scoreless innings continued until the fourth inning when a little luck finally seemed to creep it's way onto their side. James Loney singled on a check swing to left field with one out. Ben Zobrist blooped one between shortstop and left field. Then, with the scoreless innings streak up to 31, Matt Joyce lined a ball up the middle, driving in two. After walks from Yunel Escobar and Ryan Hanigan loaded the bases, Desmond Jennings singled in two more runs, giving the Rays a 4-3 lead.

They'd tack on two more runs thanks to a hit by Evan Longoria and sacrifice fly from Loney. Every starter reached base at least once and the team went 3-7 with runners in scoring position. It's amazing how easy the game is when hits start falling at the right times.

Starting pitcher Erik Bedard didn't get hit hard -- of the eight hits he allowed only one went for extra bases -- but he gave up three runs in four innings and it certainly could have been worse. Though, if the Rays don't take the lead in the bottom of the fourth inning Bedard probably gets to pitch another inning or two. Brad Boxberger came on in relief and loaded the bases with two outs. Light hitting Peter Bourjos line a ball to right field...only to have Kevin Kiermaier make a tremendous diving catch to rob him of extra bases. 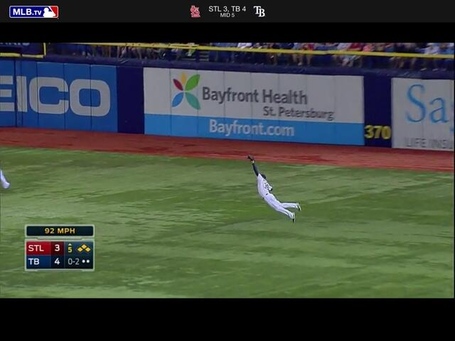 It's a great catch in a huge moment, and I'm going to be a Debbie Downer, Kiermaier took a horrible route to this ball from what I could tell. Had he go to his back-right, toward the Bayfront Health sign, he likely makes that catch on the run and it's nowhere near as dramatic or fancy. But, hey, that looked pretty.

With the Rays leading by one with two outs in the seventh inning Grant Balfour was called upon, and the world didn't implode on itself. He recorded the out to end the inning, then pitched a perfect eighth...and ninth, picking up an old fashioned 2.1 inning save and throwing just 37 pitches in the process. The closer by committee edict is still in effect, but it was nice to see Balfour look dominant again.