On the very first pitch of the game, Dexter Fowler jumped on an Erik Bedard 84 mph fastball elevated over the heart of the plate. Think about that. An 84 mph fastball up in the zone. 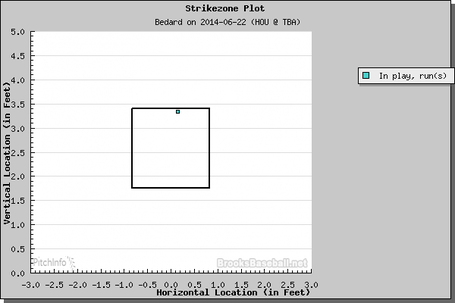 It is impossible to imagine a worst pitch than this one. Fowler probably thought he was still taking batting practice. Bedard earned that home run.

Two batters later he issued a walk, and you could have been forgiven for thinking this was going to be one of those long, sad Bedard days (as opposed to a long, happy Bedard day). You would have been wrong. The Astros tagged another run on in the third inning when Jonathan Villar snuck a ground ball down the third base line for a double, and then stole third (he was originally called out, but replay showed that Longoria missed the tag) before being singled home, but that was all they would get.

Bedard mixed his pitches like the wily veteran he is, being especially brave with the changeup inside to opposite-handed hitters (an unusual pitch outside of the Rays organization). In total, his 108 pitches took him through five and a third innings, in which he gave up seven hits, one walk, and one hit-by-pitch. He struck out eight Astros.

The Rays offense had also gotten on the board in the first inning. With one out, Ben Zobrist worked a full count and then turned it into a walk. Brandon Guyer then kept his front foot in place and took a breaking ball of his toe to move Zobrist to second. A line drive base hit by Evan Longoria tied the game.

When Bedard got into trouble with back-to-back singles in the sixth inning, Maddon swapped him for Juan Carlos Oviedo and turned the game over to the bullpen. They were excellent. Oviedo, Grant Balfour, Jake McGee, and Joel Peralta covered the last 4.2 innings and gave up only two walks and no hits, while striking out five Astros.

Oviedo's two outs "earned" him the win, because the Rays offense came alive in the bottom of the sixth. Zobrist lead off by working a walk in an eight-pitch at bat. Guyer then reached for a pitch down and away and bunted it perfectly down the third base line, beating it out for a single. Longoria then inside-outed a sinker into right field to load the bases. Yunel Escobar also took a sinker the other way, chopping down the line and just out of the reach of the first-baseman. What might have been a double play gave the Rays the lead. Sean Rodriguez sacrificed in another run when the Astros failed to turn another possible double play, bringing the score to 3-1.

Rodriguez would sac in one more run in the eighth inning, but Bradley gave the ball away cheaply in the middle, and Cameron inexplicably lost his mark in the last 15 seconds of play.