The Rays offense managed to collect twelve hits and five runs, but would fall just short in yesterday's 6-5 loss to the Pirates.

Share All sharing options for: The Rays Tank: Runs Wasted

In a game where Jose Molina collected his second RBI of the season and the offense managed to scratch together twelve hits and five runs, the Rays fell just short of a victory when the would-be game winning run popped out on the first pitch of his at-bat in the bottom of the ninth inning. In the previous inning, Evan Longoria did hit his tenth homerun of the season, but with the tying run on first and two outs in the bottom of the ninth facing Mark Melancon, Longo swung on the very first pitch he saw and popped up to shallow center, ending the Rays potential comeback.

For more on the game and Archer’s performance, head on over to Erik’s recap here. It’s also worth mentioning that in the sixth inning, the Pirates scored a run after an extended two-out at-bat by Ike Davis turned into a double, and Josh Harrison drove him in with a single immediately afterwards. Here’s a look at the strikezone plot for the Ike Davis at-bat, courtesy of BrooksBaseball.net. 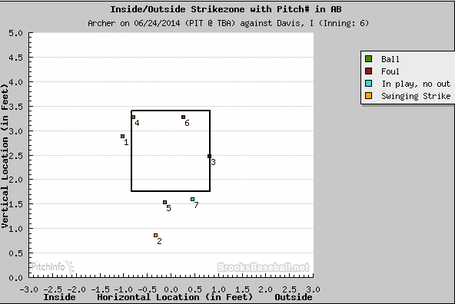 Twenty-one straight days with the worst record in baseball now, by the way.

-Buster Olney says that the climate is just right for a David Price trade. Trade rumors are putting Price in a bad mood though, according to Bill Chastain.

-Enny Romero and Justin O'Conner were selected for the 2014 Futures Game roster.

-You can run up Hatfield's bids on Derek Shelton's game used Turn Back the Clock jersey, right here!

-Over at Baseball Prospectus, Robert Arthur takes a look at what bringing in a new hitting coach has done for the Kansas City Royals this season.

-Carlos Pena was called up by the Texas Rangers yesterday.

-Heath Bell was released by the Yankees after just five appearances at Triple-A.

-MLB made some adjustments yesterday to the collision rule at the plate. Rule 7.13 will not be applied to force outs at the plate any longer.

-The Hardball Times examines the physics of some great throws over the years.