Eight losses in a row and three straight series sweeps lead to the worst road trip in the Rays franchise history.

You read the title correctly. This three city, eight game road trip, in which the Rays did not collect a single win, is the worst road trip for Tampa Bay in team history. After being swept by the Blue Jays, Red Sox and Marlins, the Rays will head back to the Trop for an eight game homestand against the Marlins, Mariners and Cardinals.

Last night, the Rays were shutout by Henderson Alvarez on just 88 pitches. Tampa Bay managed to collect eight hits against Alvarez, but failed to capitalize with their baserunners, grounding into three double plays and going 0-3 with runners in scoring position.

Chris Archer allowed only one run to the Marlins on a bases loaded walk in the fifth inning. After starting off 0-2 against Christian Yelich, Archer threw two fastballs for balls, got Yelich to foul off pitch number five, and then threw two sliders just a bit outside for balls three and four. With Molina’s framing, pitch number seven appeared a bit closerto the plate than what is shown in the strikezone plot, courtesy of Brooksbaseball.net. Archer told SunSports after the game, "I should have thrown the ball over the plate. I shouldn’t have left it in the umpire’s hands." 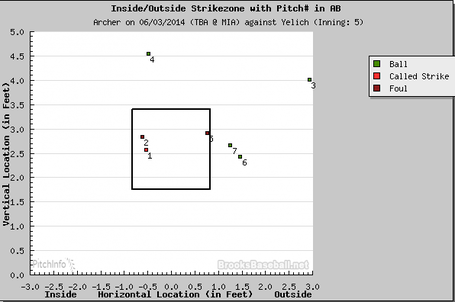 In the top of the eighth, the Rays got the leadoff man aboard by way of a Yunel Escobar single. The baserunner was quickly eliminated as Jose Molina BUNTED INTO A DOUBLE PLAY. Yeah, one of those kinds of nights. In case you’re wondering, Jose Molina still has a whopping total of ZERO RBI’s for the season. ZERO.

In case you missed it yesterday, Wil Myers went and saw a hand specialist and it was announced that he has a small stress fracture in his wrist. He’ll be in a cast for the next 5-6 weeks before he can begin to rehab. Myers will comment on the injury later today.

Drew thinks that it’s time for Evan Longoria to "Rays Up". He mentions,

Longoria has been doing the right things. Reports have surfaced before games that he's out on the field getting extra BP in or fielding practice. I'm not questioning his work ethic. But for the "benchmark player" that Longoria wanted to be for the Rays franchise, his production has been disappointing. In May alone, he batted only .237 with two home runs and eight RBI.

During next Tuesday’s game, the Rays will be holding a broadcast auction with items such as hitting lessons from Wil Myers and pitching lessons from, wait for it, Grant Balfour.

-Brandon Workman was suspended for six games and fined an undisclosed amount for throwing at Evan Longoria’s head this past weekend. David Ortiz, yet again, had to let his opinion be known about the suspension.

Ortiz absolutely livid that Workman gets suspended and Price didn't. He doesn't like Price doing punkass (expletive) that begins with an s.

-Evan Longoria talked to Bill Chastain of MLB.com about the suspension, stating,  "I guess in this situation, you just let Major League Baseball decide what they think is the right or fitting punishment. I really just think it came down to where he threw the pitch. I just don't think it's as big a deal if he hits me in the rib cage or in the leg or whatever."

-When Derek Jeter retires, he wants to own a baseball team.

-Dirk Hayhurst gives his opinions on baseball’s unwritten rules over at Deadspin, calling out Jonny Gomes in the process.

-Fausto got called out by Larry Bowa during a radio interview yesterday in which Bowa says that the Phillies aren’t playing big league baseball right now.

-Jose Bautista credits the Blue Jays new hitting coach for his ability to beat the shift.