I'm not asking you to *read* my recaps, just rec them.

Share All sharing options for: Rays 6, Twins 2: Welcome to the bigs, Curt Casali!

Wow, what a game, huh? Man, I was hoping that baseball would come back strong after the All-Star break, but man, I sure wasn't expecting that! Did you see that play? You know which one. I thought that there was no way that that particular outcome would have happened, but I guess that's why they say you can't predict baseball. And that pitching performance by one or both of the starters! Let's just say the sportswriters will have a lot of fun recapping that one!

Alrighty then, full disclosure: I wrote that paragraph well before the game. I wrote it 4 days ago. I've been pretty much sick in bed for most of the All-Star Break and I'm still recovering from some awful sore throat thing. Plus, I don't think I've left my house because I started playing Skyrim for the first time, which I'm now realizing is a huge mistake when you have a job and responsibilities and social interactions in meatspace that require periodic nurturing and can't be loaded from a previous save point.

Anyway this recap was written entirely with text-to-speech software, which Wired magazine called 2007's Next Big Thing. I hope you enjoy it, because I wrote it up a couple of minutes ago worked long and hard finding the perfect words to best summarize this bombshell of a game. You might ask why, if I had a sore throat, I'd be using text-to-speech instead of just typing it out. I'd probably respond by asking you why you'd think I could hear the rhetorical question you posed in your home/office, and then dismiss you with a cleverly constructed sarcastic comment as I walked away that you'd probably reflexively chuckle at, but then spend the rest of the day wondering why you didn't tell me off.

Kirk Kyle Gibson started off looking pretty strong, needing only 10 pitches to mow down the in-all-likelihood hungover Rays offense. Cobb, often a sieve in the first inning, was also able to work out of the first with no damage done as well. In the second, Loney got a base hit with one out and Escobar made a bid to put a runner in scoring position early, but a fine play by Brian Dozier kept the ball in the infield, and they were almost able to double up the hustling Escobar. Cole Figueroa then grounded out to end any threat. In the bottom of the inning Cobb ran into a bit of trouble. A one out walk and a base hit put Twins on first and second with two outs, with Sam Fuld up to bat. BA felt that it was necessary to mention that Super Sam had reached base 17 times in his last 23 attempts, and I felt like we'd be seeing some former-Ray nightmare (TM) action from Captain Clutch, but Cobb was able to get Fuld to fly out harmlessly to left.

In the third both teams exchanged runs. Curt Casali, recently called up from AAA Durham, singled in his first at-bat. The Twins threw the ball back to the dugout and

NO NO NO SEAN WHAT ARE YOU DOING

After repeated rewindings you can see has a ball in each hand and actually doesn't throw Casali's prized possession into the Minnesota seats, but it sure fooled me. In the next at-bat Kiermaier made a bid for an opposite field hit but was stopped by a diving Sam Fuld. A Jennings single and a Zobrist walk loaded the bases with one out. This, of course, typically means doom, as the Rays offensive strategy has mostly been, up to this point in the season, score runs without loading the bases. 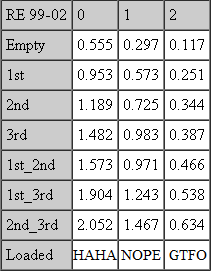 That's about right. And Matt Joyce was by no means ready to deviate from the strategy. He popped out in the vast, vast foul territory at Target Field, bringing up Evan Longoria. I don't need to tell you all that it's been a rough first half for Longo, and he seems to be coping with it by trying to swing his way out of this extended slump. It hasn't really worked, so far. In the second inning he grounded out on a breaking pitch in a whole at-bat that was just very un-Longo-like. But the inning you're in now is the only inning that counts. On a 2-0 count, the warm fuzzy home of a big swinger, Longoria scorched a ball that made you forget he's lost his power this year.

Is that out at the Trop? It's probably out at the Trop. Longo got thrown out trying to score on an infield single but he still gives the Rays an early lead.

The Twins strike back in the bottom of the inning. Whereas the Rays built an inning out of very little and scoring in one fell swoop, the Twins scored two runs all of a sudden, like a smooth knife slipping into your sternum. Alex Cobb, despite allowing a one out single to Brian Dozier, was ahead of everyone, and seemed to be working with two strikes constantly. With a 1-2 count to Trevor Plouffe, he allowed a fly ball homer to left that put the Twins within 1 run. #RaysUp 3-2

I went to the bathroom and the fourth inning was over. Both Cobb and Gibson needed only 10 pitches each to set the other team down 1-2-3. In the fifth, Kiermaier hustled out an infield bunt single on which he was originally called out. The replays were pretty much conclusive on the first look, and the call on the field was quickly overturned. Ben Zobrist, with one out, then launched a ball into the right field seats to boost his trade value and put the Rays up 5-2. With Cobb on the mound, the Twins put up yet another threat. After giving up a hard luck single, Cobb hit Brian Dozier on the finger while he tried to bunt. Maddon wanted a replay (for some reason) but there was no way that call could have been overturned. Cobb was able to work out of it with no runs allowed, but it illustrated how he was simply not as sharp as he had been.

The Rays went real quiet again in the top of the sixth, on just seven pitches, in a half-inning barely worth mentioning. The Twins did not go quietly in the bottom of the sixth, in a half-inning definitely worth discussing. Cobb, very quickly, got the first two outs on unusually flat changeups. In the next at-bat, he hit Kurt Suzuki. Right after that, he allowed a walk on the 99th pitch of the night. Cobb, visibly frustrated, was removed by Joe Maddon in favor of Brad Boxberger. All Boxy does is throw strikes, except against Sam Fuld, apparently. In a herculean at-bat, Sam drew a 10-pitch walk to load the bases. Luckily for the Rays, Boxy was able to induce a groundout to end the inning, illustrating the power of the Rays' run expectancy chart above.

Kevin Kiermaier led off the inning with a ball hit so hard to right field that not even he could stretch it into a double. I find it funny that we were concerned that he would not be able to keep up his power numbers, and has not only kept them up, but in this case he hit the ball with so much raw power he couldn't improve his power numbers. Stats are worthless and people who think they're valuable probably only played Little League and couldn't keep up with the pros. Jennings sac bunted KK to second and Zobrist walked to bring up Matt Joyce with runners on first and second. Joyce, always a fan of the Process, did not see the need to have an unproductive out, as the bases were not loaded, and thus lined a ball to right field off of reliever Matt Guerrier to score Kiermaier, putting the Rays up 6-2. In his first (and only) four at-bats against Guerrier, Joyce has hit for the cycle against him, perhaps begging the question as to why Gardenhire would call to him in particularly. But at the end of the day we can't look into the mind of a man. We can only look at ourselves, and try to make ourselves the best possible selves we can be. Longoria grounded into a double play to end the inning though. Boxberger, on the other hand, came back out in the bottom of the inning and struck out the side on 11 pitches. All Boxberger does is throw strikes.

Full Disclosure Part 2: Electric Boogaloo: In the eighth I fell asleep again. Apparently, though, I didn't miss much. Balfour came in the eighth and set down the Twins 1-2-3, occasionally peppering in a slider that looked pretty sharp tonight. Jennings got a hit in the ninth and McGee came in for the final three outs. All in all, a nice, clean game which allowed the Rays to start the Post All-Star Break right. Tomorrow David Price will square off against Phil Hughes in a game that I will not be watching, because dragons wait for no man.