Before we get to the recap I have to ask if you guys have been paying attention to Joe Maddon's tweets. Does anyone follow him on Twitter? His posts are getting weirder and weirder. I'm sure you saw the one last night that he posted about Grant Balfour:

I know we all like to talk about Joe's reliance on a mixture of analytics and gut feelings (how many managers start players on their birthday looking for "birthday magic?") but I think the screws are starting to come loose on Maddon. Our esteemed commenter Edged last night seemed to think that Joe was trolling, and at first I was inclined to agree. But some of the things he said this morning made me really concerned.

I mean, there's plenty of reasons to not do this. Pitchers typically do not hit well, especially compared to professional major league hitters. This makes sense, as pitchers normally would have to split their time between pitching practice and hitting practice, instead of just focusing on hitting. What's more, as far as I can tell, Jake Odorizzi has never taken a professional at-bat, even in the minor leagues. To throw someone who hasn't swung a bat in six years into a professional major league game seems foolhardy, even for an unconventional manager like Joe.

Luckily, someone talked Joe out of this plan and he started Zobrist at DH. Jake, relieved of this burden, was able to pitch a passable game. Despite giving up a leadoff homer to my namesake Brett Gardner, Odorizzi ended up one out shy of a quality start with 99 pitches under his belt. Frustratingly, in three separate innings, Jake gave up the lead to the Yankees. He gave up a two-out, Yankee-Stadium-assisted home run to Brian McCann in the third, and a two-out, two-strike, seeing-eye single to (who else) Brett Gardner in the fourth.

Despite it all, the offense was able to bail out Odorizzi with a strong showing today. Maddon, normally highly supportive of his players, was uncharacteristically critical of his hitters earlier today.

I'm not entirely sure what Maddon is trying to go for here. Although I know he played a little in the past, Joe is now a 60 year old man, who, like Jake Odorizzi, hasn't had a meaningful at-bat in a long time. I wouldn't be surprised if a major league pitcher would be able to take advantage of the many holes in Joe's swing. These tweets are highly unusual for a major league manager but hey, that's just Joe I guess! You take the good and you take the bad. You take them both. And those are just the fact of life.

Despite Joe's lack of confidence the offense definitely showed up today, bailing out Jake Odorizzi with every chance it could get. In the third the Rays got a run without the benefit of a hit with RISP: the Rays Way. A passed ball with runners at second and third scored Kiermaier to tie the game up.

Seemingly stuck in a loop forever, Joe Maddon got philosophical.

Luckily for all of us S-Rod again broke the cycle by hitting a two-run bomb to center. Here's a thing:

Sean Rodriguez's 6th-inning HR was calculated at 445', longest of career and longest by @RaysBaseball player this yr pic.twitter.com/zhgbCEpfqK

In the ninth the Rays struck again. A leadoff walk by Desmond Jennings set the stage for a bit of a wacky inning. Zobrist hit a hard ground ball that Kelly Johnson was able to snag. His throw to first just barely beat Jennings at second, and Maddon politely asked the umpiring crew to recheck their call, if it wasn't too much trouble. Replays seemed to show a perfect tie, but the call at out was upheld. Despite that, Yangervis Solarte bailed out the umps by throwing a Brandon Guyer groundball to right field, putting Rays runners on second and third with one out. The Yankees intentionally walked Longoria to bring Loney to the plate and work the lefty-lefty matchup. Loney hit a groundball to first and the gambit seemed like it was about to pay off, but Kelly Johnson had trouble corralling it and was only able to get the out at first, scoring the Rays' sixth run and ensuring that we all get 50% off pizza tomorrow.

Bullpen cracks open the door, slams it on Yankees' toes

Odorizzi left in the sixth after a long fly ball and a liner to first. Cesar Ramos came on an gave up a liner to left that found a glove for the third out. After giving up a single to Gardner in the seventh Maddon called to Juan Carlos Oviedo, who seemed perfectly content with pumping changeup after changeup to the meat of the Yankees order. Although he walked Brian McCann, The Artist Formally Known As Leo Nunez struck out Carlos Beltran and Kelly Johnson on, I think, nine straight changeups.

Peralta came in for the eighth and pitched well, giving up only a two-out double to Rays nemesis Brian Roberts. Brad Boxberger worked the ninth inning, and I breathed a sigh of relief. After reading what Maddon put on Twitter last night at 11 PM I thought that he was going to take an alternate route to a save.

Again, this is an unusual move for an unusual manager, but I think we are well past the point where we should be questioning Joe Maddon.

All Boxberger does is throw strikes. In case you forgot:

Sure sometimes those strikes end up as home runs but that's beside the point. He picked up two more strikeouts and the save today, Rays win 6-3. 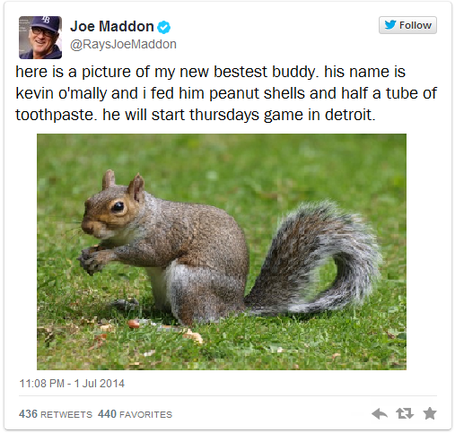 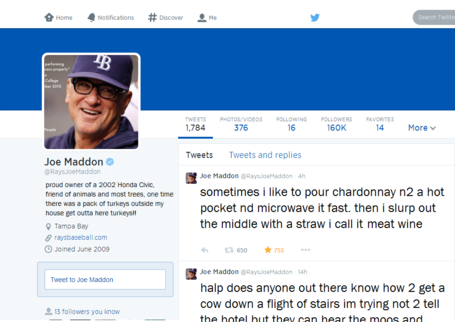