This Week in Trade Rumors: David Price will be traded 11 times, pitch against himself

By definition everything that follows is now officially a "trade rumor."

Share All sharing options for: This Week in Trade Rumors: David Price will be traded 11 times, pitch against himself

Did you know that on July 31st, there is something called the Trade Deadline? I know! What even is it? Well, I did a little research and apparently after that particular date at 4 PM baseball teams are no longer allowed to send human males-*ahem* excuse me-baseball player/employees to new cities completely against their will, without any regard for basic ethics or even basic humanity. It's like trading baseball cards with your buddy down the street, except you also aren't required to transplant the card's entire life and force its kids to go to a new school with new friends who don't even like baseball and root for a new team with a dumb mascot and colors that you hate, and also your buddy doesn't live in Kansas City where the air is thick with barbecue sauce.

Luckily, these trade deadline rules only apply to baseball teams sponsored by the Major League Baseball Association. This is the ruling body that controls-you guessed it!-game-used Derek Jeter memorabilia! They also dabble in governing baseball within the United States of America. If you move to a new city, you can still move your son to a new Little League team; most Little League teams do not fall under the purview of the MLB. This means that he doesn't have to stay behind and sleep in the janitor's closet, even if it would solve all of your problems and you could move to a new city and start fresh with a new life plus you'd even leave him with a prestigious apprenticeship as a janitor which is a lot more than Carol ever left him with.

Anyway, this year our own David Price is on the chopping block. Even though I just started watching this team last year I am outraged that the management would even consider trading one of the cornerstones of this team for scraps. Why, I still remember when he started that game in 2006 or 2007 when the Rays made it to the playoffs! Price threw a CGSO against the Red Sox to win the ALCS. And then when he faced the Red Sox again in the World Series later that month, he came in and shut them down from the third to the ninth inning. Unfortunately the Rays lost to the Phillies that year in the World Baseball Classic, but that wasn't Price's fault. Nobody expected Pat Burrell to pitch that well.

I am pretty up-2-date on this whole web thing. I like to surf the Twitter feeds looking for the next big scoop, and I'd like to share some of what I've found this week about David Price trade rumors.Ya know, I wish there was a site that complied all of these trade rumors you'd hear about them in the MLB. Maybe it could have a search engine, and you'd sort the MLB trade rumors by team. I wonder what that website would be called...oh well. It's just a pipe dream.  Here are some links to pages that talk about it. He seems to be getting increased interest from the Cardinals, who now have explicitly said that they'll only trade for him if he signs a long-term deal with St. Louis anyway. The Mariners, on the other hand, seem to be getting desperate, and are still pursuing him despite Price's reluctance to sign long-term with them. Who will cave first? The panicky Mariners or the stoic Cardinals? Or will the Dodgers work their way into the mix? Only time will tell.

These are all well and good, but I know why you came here. You came here to see the trade rumors delivered to you on a silver platter. You should barely have to move your mouse to do it. Well brother, I'm happy to oblige. Here's the first one I found. You can click the pictures to make them larger but if you need to do that you should probably update your prescription/see an optometrist. 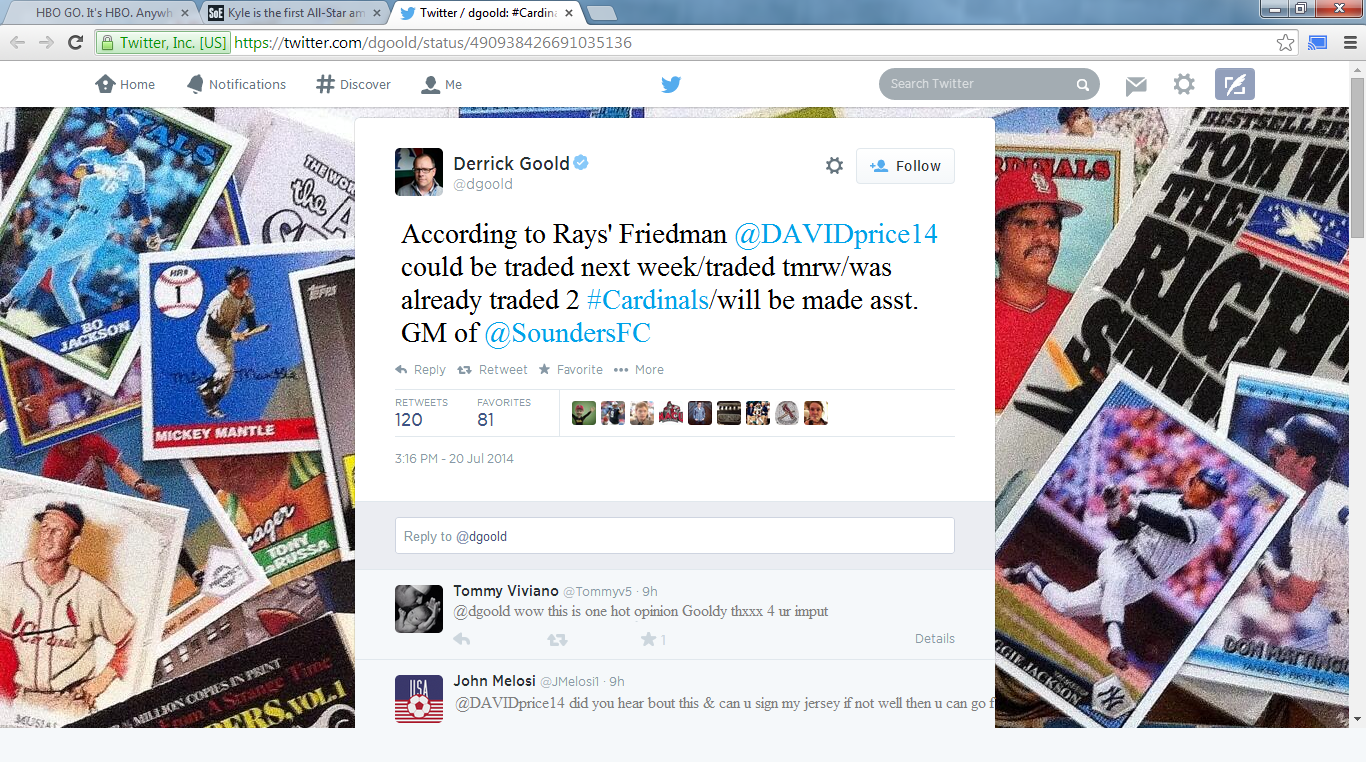 Hope you don't mind, I used screen-capture for all of these. I was going to take a picture with my phone, email it to myself, send it to a flash drive, drive to a library computer, and upload it there, but I dropped my phone in a lake. Wow, though, this is some news. I'm always amazed how accurate sports journalists can be when it comes to things that haven't happened yet. I mean, you'd expect a bit of error just because you're essentially predicting the future, but wow! There's literally never once been any kind of error! No tweets have been set out prematurely, no unreliable sources: sportswriters have a 100% success rate with this stuff! These guys just seem to hold themselves to a higher standard than even most doctors, and readers reap the benefits. We sure are lucky, as baseball fans, to be blessed with journalism of this high quality. Personally, I don't think we deserve it. 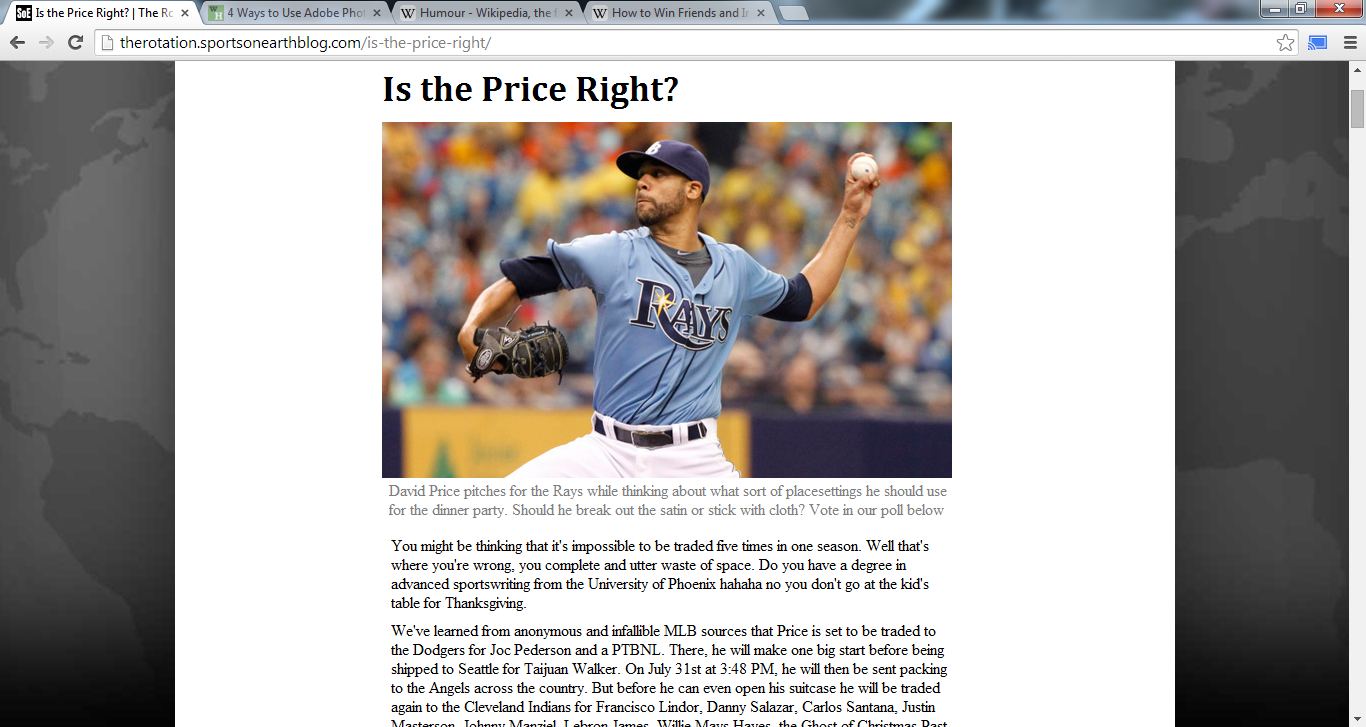 Boy howdy the baseball world sure can get complicated. Do ya think a team has ever accidentally traded a player just 'cause of the sheer whirlwind of activity? Haha of course not that could never happen. 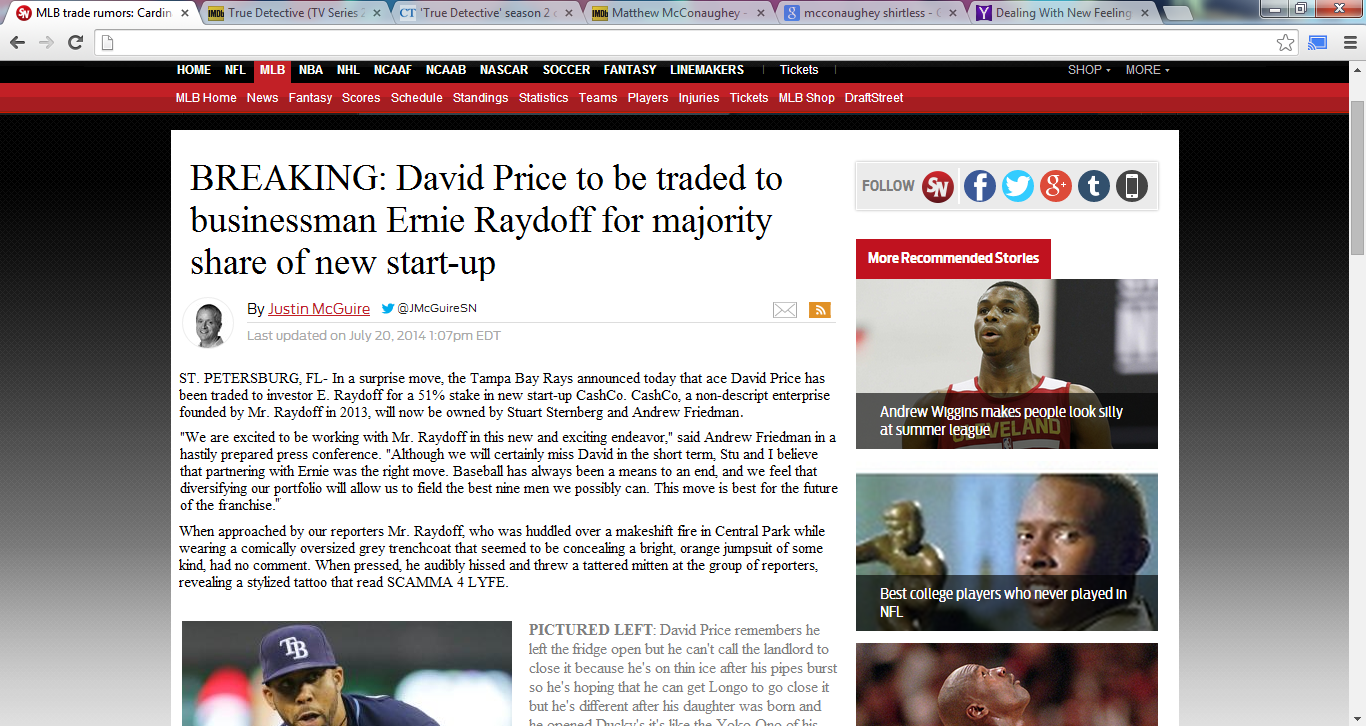 Well dang, I guess that's it then. Looks like Price, instead of going to another MLB team, now plays for some corporation somewhere. Maybe they have a men's softball league or something, or else I'm not sure if Price is going to maintain his current workload. I'm also not sure what CashCo produces or even what they do to make money, but for some reason I really want to invest in it. CashCo: Where the Winners Go or something, probably. I want to give it an exorbitant amount with only the promise that it will be doubled in a year's time.

Still, It's been great having David Price around, from his Cy Young Award in 2012 to that time I saw him sneakily pick his nose and wipe it inside Casey Kotchman's glove. Whatever you end up doing, David, I hope you're happy. And, most importantly, I hope that you're maximizing your inherent value and bringing significant tax-exempt capital to your investor. As always, in times of crisis, we must turn to the wisest one among us. Someone whose years of experience, joy, heartbreak, anger, and tragedy can bring us closer together as a planet, and give us peace. 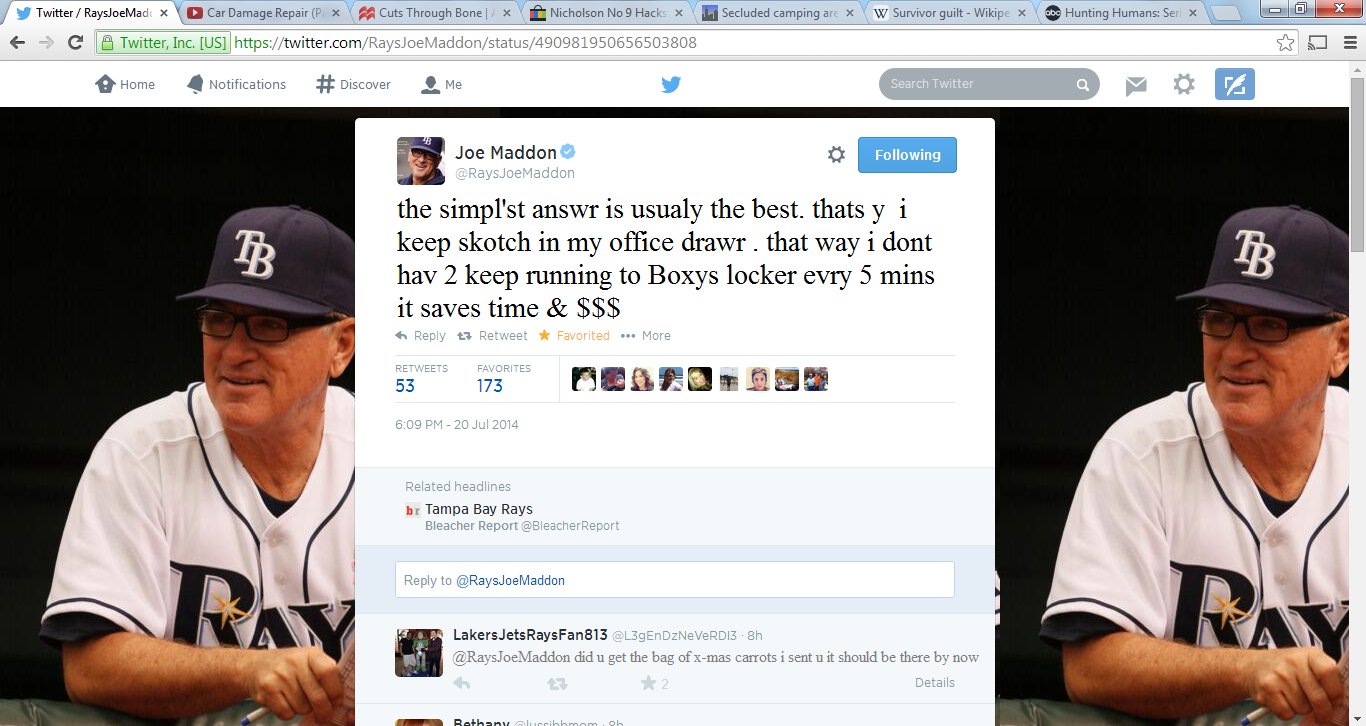