"the coolest, single baseball moment of my life"

Busch Stadium the third, a homecoming for Jake Odorizzi.

Possibly the best start of the season previously came against St. Louis for Jake Odorizzi, but tonight he is on the road, in his hometown in the midst of family and friends (and all their distractions), facing off yet again against the Cardinals' ace, Adam Wainwright. 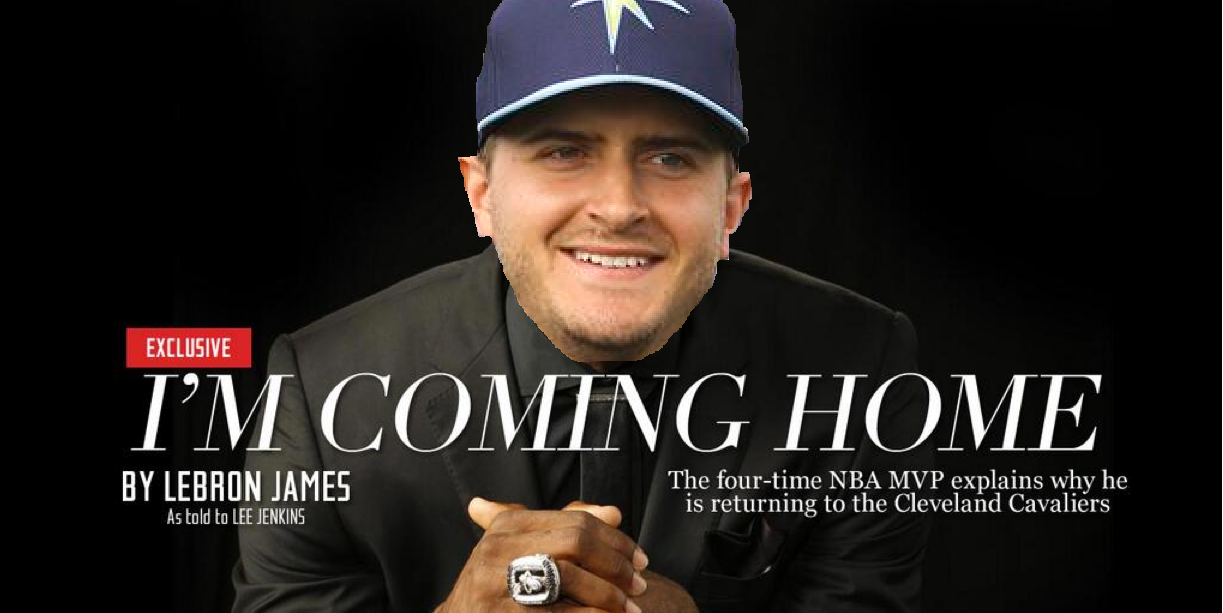 On a steamy 89 degrees, fastball command would be make or break for Odorizzi, as it has been all year. Facing his first batter, he left a meatball over the middle in a 3-1 count for a leadoff homerun to Matt Carpenter, near dead center. 1-0 St. Louis

After a walk to Kolten Wong, the youngster went for the swipe on the first pitch, but Jose Molina saw it the whole way. Receiving the fastball standing, Molina rifled to also-Cardinal-fan Ben Zobrist for Odorizzi's first out in his childhood cathedral. He closed the first frame with a strikeout of Matt Adams. He would then strike out the following two batters in the second inning.

Backing up, James Loney led the second with a double, the Jose Molina swung hard on a curveball to pull over the defenders and put runners on the corners for... oh my. Added to his distractions on the evening, did I mention Jake Odorizzi was also taking his first swings at the plate since high school? After taking a strike, he laid a perfect -- and I mean perfect -- bunt up the firstbase line. James Loney scored on the fielder's choice to first base, and Odorizzi was mobbed by the dugout. 1-1 Tie Game

In the third Ben Zobrist took a pitch outside for a strikeout that caused the normally level headed player throw his bat in frustration. As he walked to the dugout, the young homeplate umpire Mark Ripperger effectively stared down Zobrist down the steps and into the crowd. Joe Maddon, recognizing the umpire's interest, decided to repeatedly yell onto the field, "That's outside, that's outside!", hollering at the top of his lungs as if to say, "I don't know why you're mad!." Maddon was ejected from the ground level, and decided to take the field and explain his position. This was Maddon's fourth ejection on the year.

Switch sides. Wainwright struckout in his first appearance against Odorizzi, but Matt Carpenter singled and moved to second on a juggled double-play ball that Ben Zobrist should have handled, but only got the runner at first. Luckily, Hodor earned a towering foulball from Matt Holliday, and James Loney was able to reach past the tarp and into the first row to nab the final out in the third. I'm reminded of just how tall he is.

James Loney and Jose Molina were on base again as Jake Odorizzi returned to the plate in the fourth, this time with two outs (so no bunting), and on a swinging strike in the zone, the runners - those runners - pulled a double steal. It's a shame Odorizzi struck out on a curveball, center of the zone. That would have been a highlight for Sports Center to enjoy. 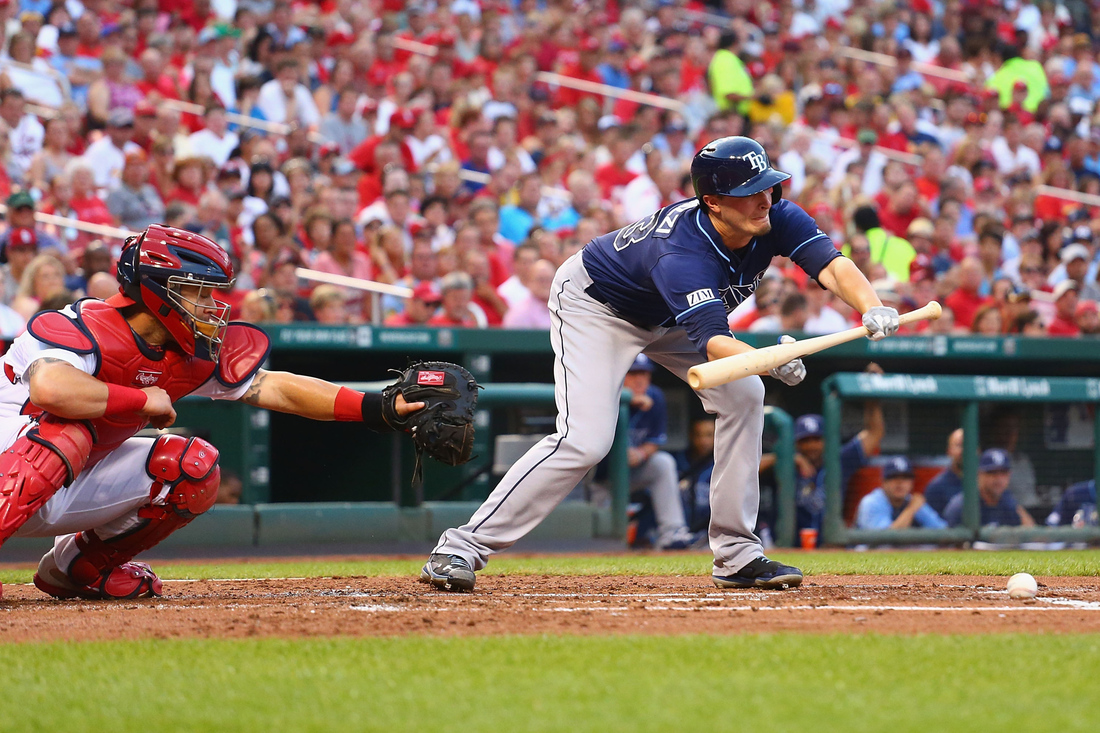 Odorizzi's fifth strikeout came on a fastball high and away for Johnny Peralta, the homerun leader of the Cardinals, to start the fourth inning. Allen Craig then flew out on the sixth pitch down mainstreet, an excellent play by Desmond Jennings to adjust on it, and John Jay popped out easily to left.

Evan Longoria took one for the team from Adam Wainwright, his fifth HBP on the season, loading the bases in the fifth during a tie ballgame for James Loney. We got to this point starting with a Kevin Kiermaier walk and a fielding error by Wainwright to put Zorilla on with one out. Matt Joyce doubled on a seeing-eye double to send KK home, then Longoria took the sinker inside.

James Loney needed five pitches to walk, scoring another run, then Yunel Escobar turned on an 89 cutter, ending in a fielder's choice and limiting the Rays to only two more runs. It looked like a bases clearing shot up the line, but the ball left the field of play for a ground rule double. Jose Molina stepped up with one out and found a fielder's choice, and tallied his eighth RBI on the season, and it was a no-pressure situation for Odorizzi. He fouled a 92 sinker (nice), ending in a walk.

Kevin Kiermaier returned to the plate, and Wainwright was lifted. Runners on the corners, including out starting pitcher, and a 6-1 lead for your Tampa Bay Rays. Not the expected results, but I'm amped. Kiermaier flew out to center, but these simple errors from Wainwright feel like a breath of fresh air. Yes we just swept the Twins, but this feels very different.

Odorizzi led the charge with a strike out, pop out, and ground out of 8-9-1 to finish the fifth. In the sixth it was another strikeout to start the frame, and then a challenged foul ball by Matt Holliday that was upheld, and the rain started to fall. Turning point with the change in weather: Holliday knocked a no doubter to left-center, then followed with an well struck single to Matt Adams. 6-2 Rays but a runner on, and a visit to the mound.

Kodor came out of his shell and took down Peralta swinging on a split-change dead-center, but walked his third batter of the night without ending the frame. At 106 pitches, he would be lifted for Jeff Beliveau, but having weathered a storm: 5.2 IP, 5 H, 3 BB, 2 ER, 8 K 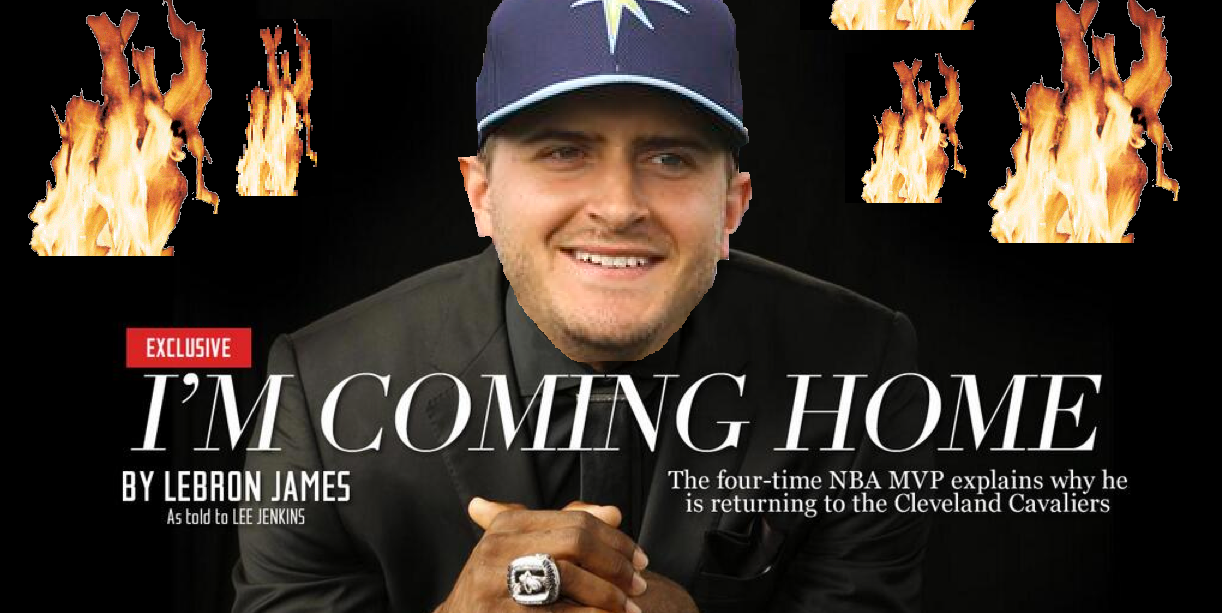 The Rays went on to win 7-2, including a top-of-the-wall homerun by Evan Longoria in the ninth inning.

In the top of the sixth, Zobrist wanted his chance to showcase his stuff and drove a towering arch to left field, but Matt Holliday made the grab at the track, halting a Zorilla family celebration.

Other Rays showing off for Cardinals front office was Desmond Jennings -- covering ground this evening, nabbing flies on the right field warning track -- and Jose Molina with that arm and glove.

Tyler Greenwood and Jeff Beliveau pitched great games for their teams, bridging the gap through the seventh for their squads. Neither would allow a baserunner.

Brad Boxberger pitched the eighth, allowing a single to Johnny Peralta, but bookended by two incredible strikeouts. Boxberger is not afraid of anyone, and eviscerated Matt Holliday and Allen Craig with some great strikes.

The ninth ended with former closer Jason Motte on the mound, where Evan Longoria's homerun made him the franchise leader in RBI, passing Carl Crawford with 593 runs batted in.

The Rays then opted for Kirby Yates with a five run lead, who struck out the first two batters faced. Oscar Taveras, possible trade candidate should the Rays offer, say, David Price and Desmond Jennings for a slew of prospects. Yates walked the next batter, causing a mound visit with two men on, but ending in a flyout.

The formally last place Rays drew a sold out crowd in St. Louis this Tuesday evening, a crowd that was chanting "Let's go Tampa" by the ninth inning, and applauding the announcement of Odorizzi's victory. After the game, he called it, "the coolest, single baseball moment of my life." Emotion was a huge factor for Hodor, but "this was the most special game I've ever been a part of."

Over the last 21 games the Rays are now 16-5, including a six game win streak.