The... Cubs'? case for David Price

Please stop laughing, or at the very least, wait until the end

Share All sharing options for: The... Cubs'? case for David Price

Scott: David Price made a pretty interesting comment at the All-Star Game last week regarding the city of Chicago:

He's probably not referring to the White Sox.  It's a pretty preposterous idea, but Ken Rosenthal says maybe we shouldn't rule it out.

Maybe Price is just a really polite guy, or maybe we can read into it too much.  I'm ready for the latter.

The Cubs' case boils down to this: they're not contenders now, but they could be soon.  They have a surplus of offensive talent they could use to acquire him, and they have the financial resources to afford the kind of extension a player like Price would command.  Of course, Price would have to agree to that extension, but his thoughts about the Cubs show he sees the big picture.

Danny: Honestly, what team is better suited to this acquisition?

1. They know the cost -- the Cubs just played this game with Oakland and netted Addison Russell, who will be tearing it up at short for them over the next decade, and did last year with Texas.

2. They have the need -- the glut of prospects in their loaded farm system is almost entirely position players.

3. They have the money for the extension -- not only is there a ton of money behind the Cubs in general, but they haven't been spending it either.

4. They have a willing candidate for an extension -- David Price clearly likes the idea of winning with the Cubs, and his former coach from Vandy is now their pitching coach.

5. They have the ability -- it's the best farm system in baseball, hands down, with enough prospects to find a match with the Rays' desires.

So what are they dealing?

Scott: Before looking at their surplus, I'd look at what they have on their big league roster right now.  It's not much, but first baseman Anthony Rizzo, infielders Starlin Castro and Arismendy Alcantara, and catcher Welington Castillo give them four players under 30 that could contribute to a winning team.

Secondly, on the prospect list I'd throw out fourth overall pick Kyle Schwarber, who's off to a great start in his pro career, because he can only be traded as a PTBNL for the next 11 months, and that player has to be named within six months of the trade.  I don't know if the Rays would want him that badly to wait half a season with him in limbo.

Their top three prospects are all top 25 talents in the game: third baseman Kris Bryant, and shortstops Addison Russell and Javier Baez.  I don't think they'd move Bryant or Russell because they can probably get the pitching help they need without him. 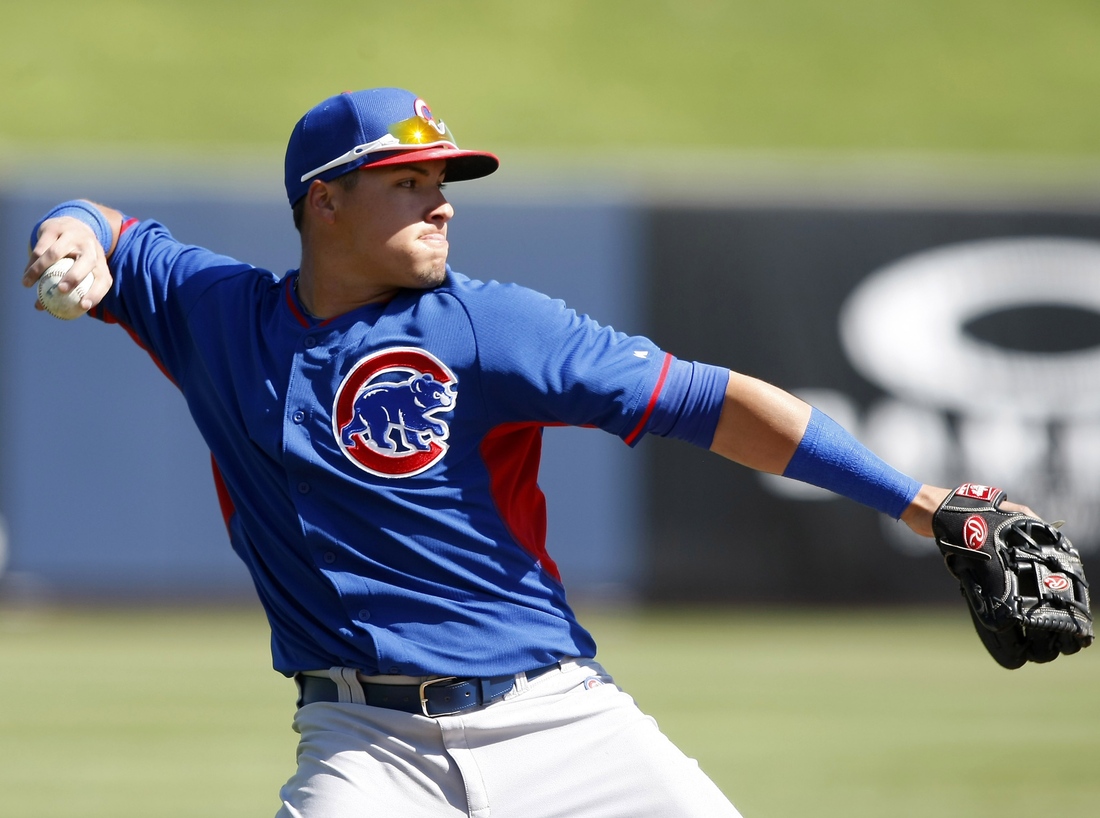 Baez is immensely talented with the bat speed to generate absurd power.  He should hit for average too, but there are weaknesses in his game.  He might as well be swinging at every pitch and needs to get himself into hitter's counts more often.  Keith Law has questions about his makeup, but that's not a universal concern.  Overall, the power potential in the middle of the diamond overrides his weaknesses, though.

Their system doesn't end there though.  Two more Cubs, outfielders Albert Almora and Jorge Soler, started the season as top 50 prospects, but their 2014 seasons haven't gone as planned.  Almora is another player with an aggressive approach, and although he doesn't strike out very often, he makes a lot of weak contact instead of waiting for his pitch.  Soler's problem is injuries.  Hamstring problems have limited to a month's worth of games, but those game have been outstanding.

Danny: Beyond the marquee names, we have a slew of hitters just as likely to make an impact.

3B Christian Villanueva has a great overall makeup and is high in the minors without a clear place on the Cubs roster. At the High-A level, Dan Vogelbach profiles as a Designated Hitter at the major league level thanks to his girth, and therefore doesn't really have a place on the Cubs' major league squad when he arrives in a few years to drop bombs. Teammate and corner infielder Jeimer Candelario already bats with maturity and could add power with development.

Other names of interest in down years are OF Josh Vitters, perpetually injured in the lower half of his body, but has been an excellent hitter prior to this season, and corner infielder Dustin Geiger.

Not in my consideration, though, are pitchers. Chicago seems desperate for them, and not interested in sending any off. Maybe the Rays could ask for a lefty for the system, like second round draft choice Rob Zastryzny.

The real question would be what motivates the Cubs or Rays to make this trade right now? Chicago is not competing this season at 14 games back in the standings, and the Rays have their eyes set on August, trade deadline be damned.

Do you see the Rays and Cubs working something out in the next week?

If the Cubs catch wind that the Dodgers or Cardinals are close to acquiring David Price, maybe they'll decide they can't let him get away.

Scott: To be honest, no.

What would motivate the Rays is the same thing as always; if a team offers them a deal they can't turn down.  If the Cubs are inclined, they're able to do so.

What would motivate the Cubs is if they absolutely believe Price is the guy to be their ace on their next World Series team.  They could just wait until after 2015 to sign him, but that could be risky.  They could wait until the 2014 off-season for a trade, but if Price gets traded prior to that (and it's more a matter of when, not if), it's extremely likely that team will be prepared to sign him to an extension.  If the Cubs catch wind that the Dodgers or Cardinals are close to acquiring David Price, maybe they'll decide they can't let him get away.

Danny: I've said from the beginning that I thought the Rays would trade David Price to the Cubs -- next off-season. I stand by my word. The question would be what gets it done.

The Cubs need pitching, and the Rays do have a decent amount of depth at the Triple-A level. It's not all ideal, but say you gave Theo and Jed their pick of one pitcher between Alex Colome, Matt Andriese, and Mike Montgomery. Is that satisfactory?

Scott: If the Cubs want a second young pitcher, Durham's rotation offers five potential big leaguers, and no one should be off limits.  Alex Colome, Nathan Karns and Enny Romero all come with upside, but they all come with risk.  Mike Montgomery probably does too.  Matt Andriese doesn't as a groundball pitcher and better strike thrower, but his upside is the lowest of the five.  I think the Rays can afford to trade a second arm if it helps them get the return they want.

It comes down to what the Cubs offer, though.  If Baez isn't on the table, I would think two of Alcantara, Soler and Almora have to be.  More periphery players like a Vogelbach, for the people here that love him, would probably be included too.