Share All sharing options for: The Rays Tank: Two games under .500 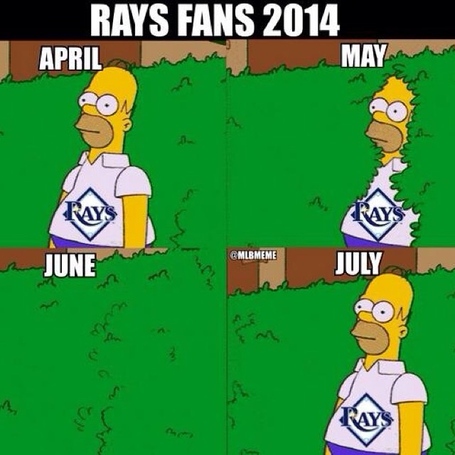 (Was floating around the Internet, but credit to Jason Collette for posting on Facebook.)

"The Rays have 9 wins this season when they've scored 2 runs or less, tied with the Padres and Dodgers for most in the majors...it's their 2nd-most such wins in franchise history, trailing only 2008 (10)." - Postgame press notes

Last night Jake Odorizzi shined, allowing only three hits and one run on 91 pitches through seven innings, while two runs in the bottom of the sixth allowed the insurance needed to give the Rays the win. It wasn't all pretty, with a Jose Molina bunting situation that should never occur again, as Ian noted in the recap.

ICYMI, Ian looked at the economics behind the trade deadline, with the money the Rays could make, and them as both sellers and buyers.

Jonah Keri gave a hat tip to the Rays in The 30 this week, noting the key role they play in this year's trade deadline (how many times can we say trade deadline in the next 24-48 hours) and breaking down the numbers of their current hot streak.

Oh, and I think the team should fully take this as a challenge:

And based on history, the Rays shouldn't be this high: They sat 18 games under .500 on June 10, and no team has ever gone on to make the playoffs after falling into that big of a hole.

Former Rays players love the Rays even when they're not still Rays:

- "The Dodgers Shouldn't Trade for Price or Lester." I agree! But not for the reasons listed. For selfish ones. That being said, take Jon Lester, Dodgers.

- Since Milwaukee is in town, the story of a pitcher in their system, Jorge Lopez, and his sick infant son. The Brewers have done a remarkable job supporting the young Brevard Manatees ace and his family during the health battles, and if you're near Rockledge, FL on August 8th, you can participate in a charity golf tournament to support their efforts.

- With all the attention on Ray Rice and the NFL's handling of his "punishment," a look at MLB's track record with domestic violence. Hint: it's not good.

- Melky Cabrera crushed a home run out of Fenway...

- Not-baseball-related-just-because-I-liked-them recs of the day:

1. Bill Simmons tossed a handful of films into the debate of sports movie or not a sports movie for Grantland's Rom-Com Week, and you can tell he actually took some time contemplating these. Heck, maybe it's just because I'm just a sucker for a good mushy rom-com or tearjearker sports flick, but I enjoyed the breakdowns of each...and his admitted adoration of "Summer Catch."

2. The most recent 30 for 30 captures the birth of the high five, given to Dusty Baker by teammate Glenn Burke in 1977. Take 10 minutes on your lunch break.