Both the good and the bad.

There were two things to look for in this game. The first was the outcome. The Rays, believe it or not, aren't quite out of this season yet, and the wins and losses still matter. The Rays won. Good. The second is the process. It was Jeremy Hellickson's first game of the season, after he had offseason surgery to remove loose bodies from his throwing elbow. How would he pitch? Is he the type of midseason addition that can help the Rays compete? Will he raise his value to the point that he can bring the Rays back valuable prospects, this season, the offseason, or the next?

Well, he's still Jeremy Hellickson, and that means that the answer is complex. It's an almost and a maybe.

Helly started off the game poorly, but was not punished. Lorenzo Cain grounded a decent fastball the other way through the infield for a leadoff hit. Hellickson got Eric Hosmer to fly out to center for the first out, and then he hung a curve to Salvador Perez.. It was a shockingly bad pitch, and Perez seemed to hit it hard, but it died a few steps short of the warning track in center field. Another curve ball over the plate resulted in a single for Alex Gordon, but with runners on the corners, Hellickson coaxed his third fly ball of the inning to escape the danger.

As the game wore on, though, Hellickson's command -- particularly of his secondary pitches -- improved. By his third inning meeting with Perez, Helly was dealing. 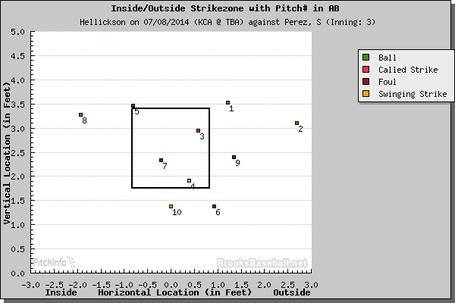 The first two pitches were poorly located fastballs, but behind in the count, he came over the plate with a pretty hittable fastball up and away. Perez took it for a strike, and likely immediately regretted doing so. He wasn't going to passively watch the next pitch he got to hit, so Hellickson took advantage of that aggressiveness with the best pitch he threw all night, a changeup at the bottom of the zone. Now, with the batter's eye level set down in the zone, Helly challenged his hands at the top inside corner. Perez fouled it off. The next pitch (#6), was a curve below the zone on the outside. Once more, Perez was set up for the pitch, and he really had no business making contact, yet somehow he did. Three more fastballs (two fouled, one taken well-inside for a ball) had Perez set up once more, and he was put away with swinging at a changeup behind the zone.

That's the good Hellickson. The one that toys with batters and always seems one step ahead. That's the one that makes you keep coming back with just a little bit of hope for the future. That can almost make you forget that he didn't make it out of the fifth inning, or that he really didn't strike that many people out (two in this game). Cut him some slack for this being his first game of the season, but Jeremy Hellickson looked pretty much like himself.

In the fifth, Helly gave up a one-out single, and then saw the runner, Cain, advance to second on a wild pitch that Ryan Hanigan really should have blocked. When Hosmer then singled Cain to third, Joe Maddon switched Hellickson for a strikeout reliever, Brad Boxberger. He didn't get the strikeout, and Cain scored on a soft chopper to shortstop.

The Rays rallied in the sixth though, with a Ben Zobrist single, a Brandon Guyer hustle double (against Alex Gordon's arm!), and an Evan Longoria single that brought them both home. In the eighth, a Guyer bunt single, a James Loney double, and a Logan Forsythe sacrifice fly tacked on two more runs, which was a good thing because Jake McGee gave up two en route to a four out save.