The David Price trade: Who is Drew Smyly?

He's better than you think.

Share All sharing options for: The David Price trade: Who is Drew Smyly?

Pretend that Drew Smyly has absolutely nothing to do with David Price. Let's say that he hadn't been acquired in a trade, at all, but had simply been signed as a free agent to a very cheap four-year deal. What would you think? You would be happy. He's a pitcher worth having on your team.

This is his major league career so far (stats from FanGraphs):

It would be easy to over-analyze these numbers, so let's keep it simple:

Fastball - 54% - 91.7 mph (Brooks Baseball numbers)
Drew Smyly leans heavily on his four-seam fastball, and what it lacks in velocity, it makes up for with vertical rise (much like Jake Odorizzi). In fact, it has the fourth most vertical rise of any pitcher in baseball to total 200 innings since 2012. Clayton Kershaw is first (if Jake Odorizzi had made the innings cut, he would place third on this list).
It's a good thing Smyly has all that rise, because he has very little run on the pitch. Here, for comparison, is the movement of the four-seam fastballs for each of the current Rays starters and Price (data and classifications from Brooks). 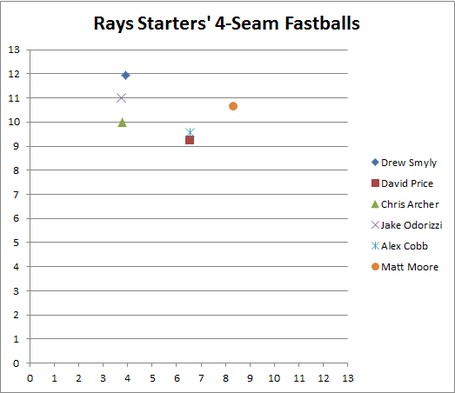 Smyly's fastball is really a lot like Odorizzi's, only with a touch more velocity and a touch more rise, from the other side of the mound. The Rays have been able to turn Odor's version into a swing-and-miss pitch, so I imagine Smyly's will do just fine in Tampa Bay.
Curve - 23% - 79.8 mph
Paired with the vertically rising fastball are a whole slew of vertically falling secondary offerings. The most commonly used one is his curve ball, which he goes to as his strikeout pitch against both right-handed and left-handed batters. Righties have whiffed at it in 32% of their swings, while lefties have missed a full 29% of the time.
There's something bizarre about Smyly's curve, though, that I didn't realize it until I started plotting it with everyone else's. In these graphs, all starters curves are plotted as if they were left-handed. That means that the right handed pitchers have their horizontal movement flipped. One of these things is not like the others: 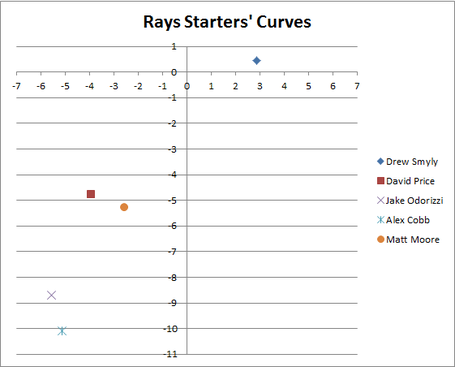 Yes, that is a left-handed starter who's curve moves to the right. Arm-side movement on a breaking ball.
That's weird. I'd be lying if I said that I knew what it meant in terms of translating the movement into results.
Also, notice that his curve doesn't have a ton of vertical drop. I would have said it was a slider, if not for the fact that its velocity is below 80 mph. Frankly, if I just saw this pitch on a spreadsheet, I'd call it a very good splitter. Bizarre.
Slider/Cutter - 23% - 86.4 mph
Okay, so this one is also weird. Brooks Baseball calls it a cutter, but it's not the usual kind.
Generally, a pitcher's cutter is a touch slower than his fastball, and has either slightly less horizontal movement, or some horizontal movement in the other direction. Very good cutters will occasionally have a touch of downward movement as well, but it's still basically a variation on the fastball.
Drew Smyly's "cutter" breaks vertically completely from his fastball. In this graph, I'm comparing it to the other Rays' starters sliders and cutters. 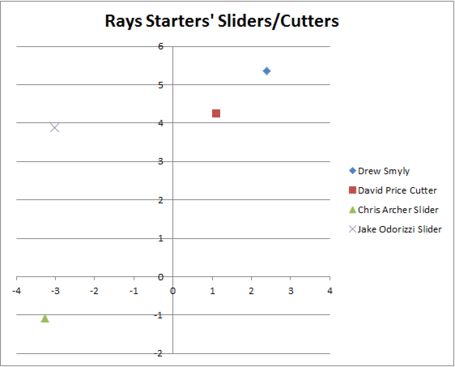 Yes, that's cutter movement in relation to other sliders and cutters, but it's slider movement in relation to Smyly's fastball. Once more, I don't really know what to think of the pitch, but I do know that it works. He throws it to batters of both handedness, and he it produces a whiff 27% of the time it's offered at. Moreover, when it's put in play, it becomes a groundball 58% of the time, making it a pretty extreme groundball pitch hiding in the repertoire of a flyball pitcher.
Changeup - 6% - 85 mph
This is Smyly's worst pitch by a long shot, and it's not all that impressive. 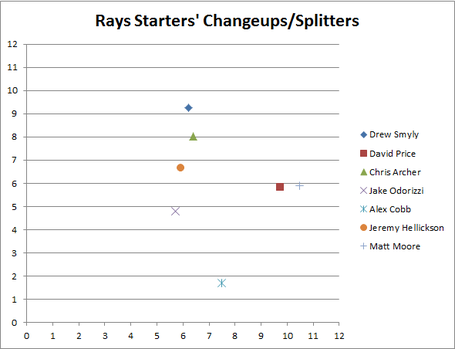 It has less movement than any of the other Rays changeups or splitters. Furthermore, it's movement is not very distinct from his cutter, a problem that no other pitchers I've examined have. I doubt this becomes a big part of Smyly's arsenal, at least without major work.
Conclusion
On the whole, Smyly is a pretty unique pitcher. I wouldn't be confident looking at his repertoire and making a prediction, but luckily for the both y'all and the Rays, you don't need me to. He already has over a full season's worth of major league innings, and he was pretty successful. That success surely is due in part to his unusual stuff, and in part to the very good command he's reported to have.
Smyly is left handed, but he is not David Price. It's not an exact replica of the arsenal, but a slightly more effective Jake Odorizzi is a close comparison. Smyly could be a very good pitcher for the next four years of his remaining service time with the Rays.
Can we all make an attempt not to hold the details of his acquisition against him?