Are the 2014 Rays the greatest collection of strikeout pitchers in history?

Share All sharing options for: Are the 2014 Rays the greatest collection of strikeout pitchers in history?

So far this season, Rays pitchers have struck out 23.5% of the batters they've faced. That's the highest rate ever, which I'm defining as the American League since 1973 (the introduction of the designated hitter). Please pardon my limited definition of "forever."

Is it fair to say, then, that the 2014 Rays are the best strikeout pitching staff in history? Well, that's a surprisingly complex question. Let's take a look at the top ten by strikeout percentage.

The 2013 Tigers weren't half bad either, and that rotation has now been bolstered by our own David Price, who was a big part of both the 2014 and 2012 Rays. What you should notice, though, is that every one of those teams is from the past three years. That's not a coincidence. Strikeouts, league-wide, have been rising steadily, and are now at an all-time high. 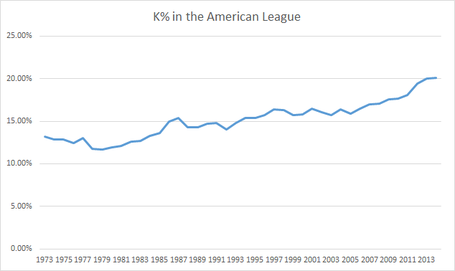 The worst strikeout team in the American League this year, the Minnesota Twins, would have been average as recently as 2006. I don't think Twins fans are especially consoled by the fact that they would have been average eight years ago, and we Rays fans shouldn't be unduly impressed by the fact that we're unhittable compared to the past, either. Instead, let's compare each team's strikeout rate to the average for their year.

This list paints a different picture. The top three teams from the first list, the 2014 Rays, the 2012 Rays, and the 2013 Tigers still make the cut, but they're in a different order. And the top spot is now held by the 2001 Yankees. That should come as no surprise to anyone who remembers that team. Their rotation was made up of Roger Clemens, Andy Pettitte, Mike Mussina, Orlando Hernandez, and Ted Lilly.

There's one more way to approach this question, though. Being above the average is impressive, yes, but it's perhaps more impressive to be far above the average while everyone else hovers around it. If the spread between teams is high in a given year, that means that some teams are surging ahead in the strikeout race, while others haven't figured out the new environment. But if everyone's strikeout rate is pretty much the same, right near the league average, while one team is far above the clump? Well, that makes that team really exceptional. I've gone ahead and normalized the strikeout rates for each year. A score of zero means that a team is average, one means that the team is one standard deviation above average, and so on. Here are the top ten.

Now the Rays are no longer on the list. The 2012 version comes in 18th, and the 2014 version 27th. The most recent team to make the list was the 2000 Cleveland Indians led by a 27 year old Bartolo Colon. The most striking characteristic though, is how much the mid-70s Angels were ahead of their time. The 1973, 1975, 1976, and 1977 versions all make the top ten. Unsurprisingly, that rotation was lead by a pair of greats in Nolan Ryan and Frank Tanana.

So yes, the 2014 Rays are really good at striking batters out. No one has ever been as good. I'm not entirely sure, though, if they're actually historic.

All data is from FanGraphs. If you want to play around with the numbers yourself, you can download the spreadsheet here.

Edit: Brian Andersbot's suggestion is nice and easy to do, so here goes. This is the results of (Team K%)/(League K%)*100.

This list is similar to the previous two, and those mid-70s Angels are still well represented, but the top spot goes instead to the 1981 Yankees, paced, as far as the strikeout goes, by Ron Guidry, Ron Davis, and Dave Righetti.