One week later, do we feel any differently?

We wanted yesterday to be the last day we sat here reminiscing over David Price, but there are several reasons for it all to be still so fresh in our minds.

This evening, King David makes his first start in a Detroit Tigers uniform, and this morning he posted a heart-felt, full page ad in the Tampa Bay Times saying Thank You to the Rays and fans. 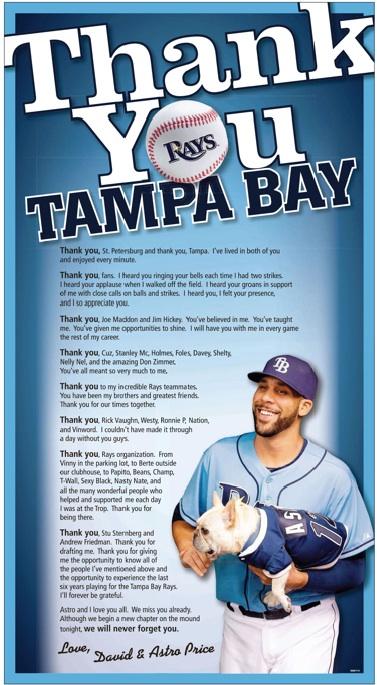 When the trade first happened, my initial reaction was one of despair. Now that the dust has settled, do we feel any differently?

The trade deadline culminated in the seemingly inevitable trade of the best pitcher in Tampa Bay's franchise history, and the expectations loomed large. I have to assume the front office took the very best deal they could find among the 29 other teams, so why don't I trust they made the right choice? Because David Price is gone, and our expectations were not met.

I've seen some say that the previous trades of Matt Garza and James Shields gave Rays fans an unrealistic benchmark for what we could garner in return for one of the best pitchers in baseball. Billy Beane proved that sentiment wrong a few weeks ago, however, trading top-five ranked short stop Addison Russell to Chicago for Jeff Samardzija (and Jason Hammel).

Supposedly, the Rays had that opportunity a few weeks ago, but one of the two sides balked. My impression is that the Rays did not want to rely on a return of prospects.

A Matt Garza return would have been a glut of decent prospects from the other team's top-twenty. A James Shields return would have been a top-five and top-fifty prospect, with a couple wild cards. The front office went neither route, and harked back to the Scott Kazmir trade instead, which brought in Sean Rodriguez, Alex Torres (at the time a projectable starter), and a lotto ticket prospect (who fizzled). This trade is that trade, but far more potent. Full disclosure: Sam Miller gave a similar take last week.

Now that the dust has settled and we can all see more clearly, am I going to be a believer in this deal?

The Rays eliminated much of the risk of the unknown by acquiring guys who've demonstrated a major league ability, skipping all those question marks in between levels and in development along the way, then purchased a lotto ticket to round out the deal in Willy Adames -- one that looks to have the realistic future of an average major league player one day.

If you're doing it big, why not mitigate all the risk you can? Risk avoidance was most likely how I landed my wife, there's nothing wrong with it as a life practice.

So our expectations were not met. We didn't get the glowering accolades of a Francisco Lindor, Addison Russell, or Oscar Taveras, where everyone just sits back and says damn.

Instead, we got two players we can expect to contribute soon, allowing the Rays to build around the success that's here today. Desmond Jennings and Kevin Kiermaier and Evan Longoria and Wil Myers and Alex Cobb and Chris Archer and all of the other pieces that make the Rays great today are here today.

Acquiring major league talent in Drew Smyly and Nick Franklin was not only smart, it seems to have been the Rays' best decision possible when spending on the free agent market would be, as usual, ill advised to the owners' pocketbooks.

What's more, with the several years of control ahead, what if these players become all they are expected to be under the Rays' guidance next season?

Ian already gave the long term perspective, when he asked whether we "lost" the trade (a must read), but what about the short term?

Take a look at the Oliver expectations from Fangraphs for 2015 for the leftys' swapped by the Rays:

Now imagine Smyly can finally harness that change up he's used so sparingly, which already features a 10 MPH difference from his fastball. Will the drop off be severe?

Then imagine Nick Franklin fulfills his 3-4 WAR expectation as Ben Zobrist reincarnate. Or imagine he's only effective as the long side of a platoon, partnering with Logan Forsythe at second base. Either performance would be more valuable over his next six years of control than letting David Price walk two winters from now.

The Rays made the safe move, one that looks more like a guarantee than not. And after the Garza trade, which produced one major league Ray out of four prospects acquired -- and after the Shields trade, which acquired a bunch of projects -- wouldn't you want the surest bet possible?

Its like a new album that you immediately dislike from an artist you love. Give it a few more listens, and suddenly you find yourself enjoying what was so unexpected it initially revolted you.

This wasn't the song I wanted to hear, but I'd ask them to play it again.