Share All sharing options for: TB 1 - NYY 0: Alex Colome Returns to the Show

Alex Colome returned to action for the Rays, an audition for his place among the top starting depth, a full load of 114 pitches and zero-run baseball. It was far from perfect.

The eye test told me his fastball command was not always consistent, like Colome expected some pitches to cut much harder than they did. Not always, just sometimes, and those little surprises resulted in light contact -- but also men on base. This issue first reared its head in the second inning, and as the frame dragged on, he kept pitching closer to the edges, losing a bit of control.

That's a dangerous combo, but compounded by the Colome stutter step on the mound.

That's a lot of movement, and I'm not talking about the pitch.

We saw very few change ups, and his maybe-you-see-it plus-plus curve just as seldom, both used a mere handful on the night. Tonight is was 76 fastballs, 24 cutters, and just a few of the others. Velocity starting at 96, dipping to 94.

To his credit, Colome pitched well enough to allow only six hits and one walk through nearly seven innings, but it was a nerve wracking start to say the least. Could this be a product of it being late in the season? No, he served a suspension to start the year. Big league jitters? No, he's dominated at the MLB level before. It was probably just careful pitching and a normal touch of inconsistency.

Hitters made contact throughout the night, but everything sounded weak. Even the singles were not barrel-on-the-ball. His final at bat was the aforementioned walk, as Maddon did his traditional "leave you in for one more batter than I probably should" thing to teach him the responsibility of letting Ichiro on base earlier in the seventh. Steve Geltz would work a pop up to end the threat and keep things scoreless. 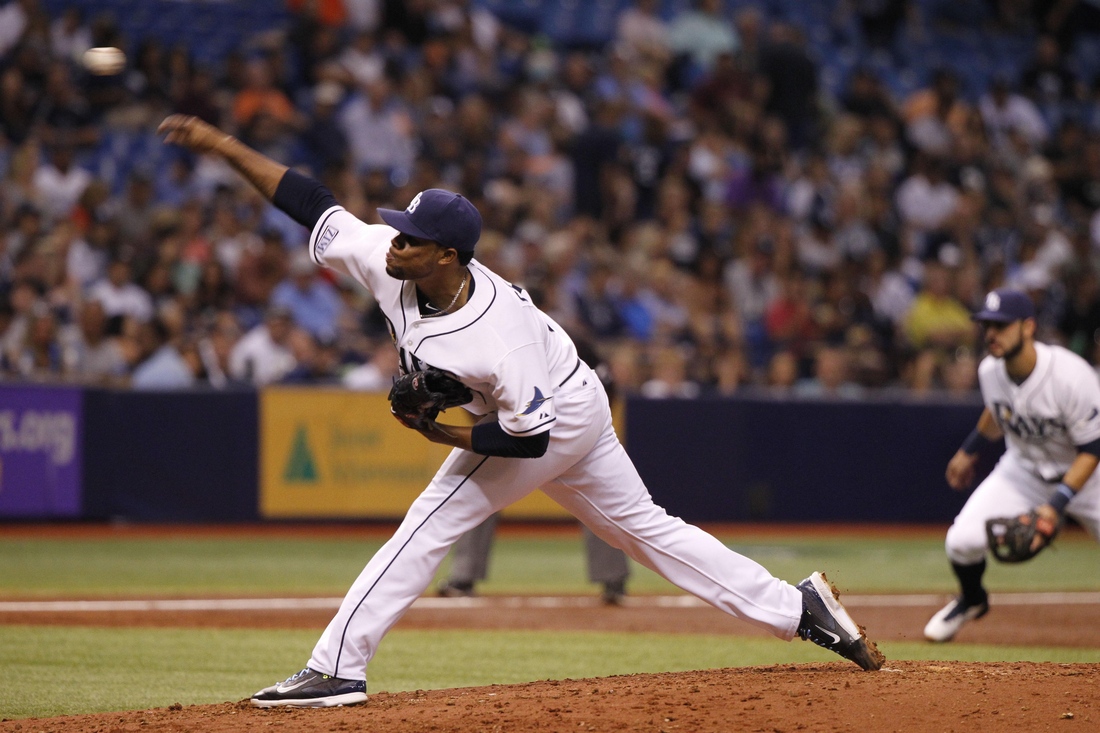 The Rays finally made a boring game worthwhile in the bottom of the seventh when Casali led with a full count walk and Brandon Guyer hot-shot up the middle. Too bad Zorilla, Longo, and Myers couldn't do anything about it. The next action was way later in the ninth, when Logan Forsythe knocked a one out singe through the left, and Loney followed with a blooped to shallow center.

David DeJesus's pinch hit ended with a foul-tip strikeout for the first out, then Matt Joyce followed unproductively. Either could have been a chance for Nick Franklin to get a shot at lore and work for a walk-off win, but instead that honor goes to Ben Zobrist, who  singled a runner home to win one for the Rays. Woooo walk off.

At one point, after a pause in the dialogue that was the best reason to watch the game, Brian Anderson asked Dewayne Staats, "Do you know we're being scrutinized right now!?" And started to describe the corners of the world with "legal pads" dissecting every word, calling the surely ravenous people at home "land sharks." The self awareness in that moment, after an awkward pause, was perfect.

- Joe Girardi failed to challenge the double play that ended the sixth, when Mark Teixeira beat the throw by a fraction, but who would believe Tex beat out a throw?

- Chase Headley was jarring with home plate umpire Marty Foster throughout his at bats, and when he took a fastball looking for strike one -- a pitch plenty in the zone -- he threw his helmet on the plate in disgust and took an ejection, swearing away. Not for a strike out, but for strike one. Truly pathetic. Another player had to finish his at bat.

- September call up C.J. Riefenhauser warmed up ferociously in the ninth with Joel Peralta on the mound, but wasn't needed.

- Other September call up Nick Franklin was in uniform for his first game with the Rays. He's chosen No. 2, to honor his childhood role model, a certain Derek Jeter. This jersey number has been worn every season by a player for the Rays, longest by B.J. Upton, and most recently by Kelly Johnson. We'll see Franklin in action tomorrow.

- The Colome verdict tonight hardly showed a guy ready to step into a major league starting roll. He limited base runners, but aggravatingly so, and Colome is still working out his breaking stuff at the top level. It all screamed reliever to me, especially given his ability to pitch higher velocity if he wanted to, and guarded by the desire to protect his elbow, but we'll see what could change in one more scheduled start on Sunday.