The Rays Tank: That lovin' feelin'

Share All sharing options for: The Rays Tank: That lovin' feelin'

There's a reason for this...and it's not just to get a song stuck in your head and wreck your Tuesday even more as you think it's Monday all day.

It was a slow news day, what can I say. Sorry guys.

Standings as the Rays continue this homestand chock-full of AL East foes: 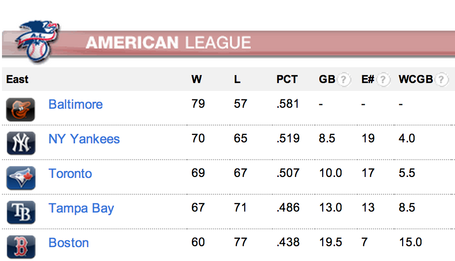 - Joe Maddon voiced his agreeance with Mike Scoscia that he believes roster size should be limited in September, with Scoscia suggesting that the MLB follow the NHL's model:

"The one idea that I've really backed is the idea almost like hockey, when you call up and expand your roster to 37 but every given night you can only dress 30," the Angels' manager said. "I think you would lock the roster in as of September 1, those guys would have to dress every day, and then out of the added guys you have five guys that could dress on any given night and I think that would make it a little more equitable for match-ups."

- Dave Martinez has been mentioned (again) as a potential candidate as the Astros next manager.

- Steve Geltz didn't believe Charlie Montoyo was serious when he told him of his call up to the Rays.

- In a move that doesn't seem surprising in the least, the Rays and Bulls have extended their Player Development Contract through 2018, keeping the Durham affiliation solid for at least another few years.