There will be no strikeout title for the 2014 Rays.

Share All sharing options for: Rays vs. Indians, game 1 recap: Klubered to death

I sometimes worry about how folks in Tampa Bay regard Chris Archer. He's a really good player who is very obviously flawed. He's a major league starter with only two major league pitches. Now of course, those two pitches -- a slider and a fastball -- can rival the best pitches thrown by anyone in baseball. Also of course, it's the results that matter, and Archer's results this season have been swell: 3.42 ERA, 3.36 FIP, 3.70 xFIP. But the first thing almost any plugged-in fan says about Archer is, "He'd be so good if he could just learn to throw a changeup." Chris Archer is the new B.J. Upton or Desmond Jennings -- a very good player who we have difficulty appreciating for what he is because of the untapped potential he seems to flash.

Now normally I'd get on my high horse and admonish you, the reader, about how you should be happy with what you've got. I'd probably also insinuate, in a not-necessarily-clever way, that the lack of appreciation for Archer had something to do with his race (because everyone knows that black pitchers don't work hard enough to throw changeups and just skate by on their god-given sliders). Let's pause that argument though, because tonight we saw something extraordinary. Chris Archer pitched very well, completing seven-and-two-thirds innings of three-hit, two-walk baseball. He struck out six Indians batters, and gave up only one run, a first-inning homer to Jose Ramirez. Unfortunately for the Rays, he was facing the realization of his potential. What do you get if you take an elite fastball and slider combination, and then add in other pitches (in this case a ridiculous 10-4 curve and a serviceable changeup)? You get the major league strikeout king, Corey Kluber.

Both of those fastballs can reach the mid-to-upper 90s with good movement. Both of those sliders are in the high eighties (Kluber's came in at 90 mph a number of times tonight). The difference is in command, of course, and in Kluber's third and fourth options. The Rays entered this series only six strikeouts behind the Indians in the race for the major league lead and for a new major league record. KKKKKKKKKKKluber put an end to that race.

It's not fair to face stuff like that under any conditions, but if you, Ben Zobrist, and James Loney were wondering if Kluber was getting more room off the outside of the plate to left-handed batters than Chris Archer was, the answer is yes. Yes he was. 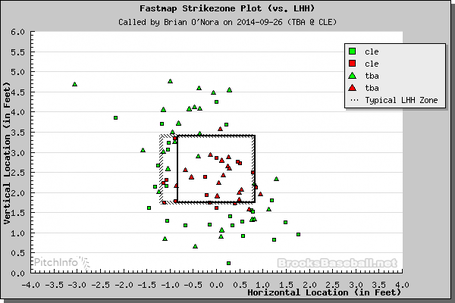 I don't think it's a coincidence or a conspiracy, though. We've talked about how adept Rays pitchers are at manipulating the top and bottom of the strikezone with their rising fastballs and their falling secondary pitches. Kluber works differently. He gets gigantic horizontal movement on both his sinker (two-seam fastball) and his curve, and he works that movement to maximum effect at the edges of the plate. Backdoor curves and frontdoor sinkers freeze batters for whiffs. Curves/sliders on the outside to righties and sinkers on the outside to lefties put them away swinging. Kulber knew exactly what he was doing, he set up those pitches, and he hit his spots. And given the movement on his curve, and the fact that these markings are for the front of the plate, those outside red squares weren't actually as far outside as they look.