Follower of the "Rays Way"

There was little for Rays fans to get excited about in these September callups. There were no highly anticipated prospects. The future of the franchise was not on display (unless you're a weirdo who thinks Brandon Gomes will become a shutdown reliever). There was not even any players that we haven't seen before at the major league level, except for Steve Geltz.

Geltz has posted good strikeout numbers in the minor leagues for a long time, but the 26 year old has only gotten the call once before, pitching two innings for the Angels in 2012. The Rays swapped the interesting but enigmatic reliever Dane De La Rosa for Geltz in 2013, but earlier this year he was suspended 50 games due to a second positive test for a drug of abuse.

Normally I'd say that 1.1 good innings from a fringe prospect isn't worth writing about, but there's something interesting about Geltz in the larger scheme of Rays pitching. Of the six batters he's faced, he's struck out four. He's done it on the back of 19 fastballs that batters have whiffed at in 70% of their swings. His fastball has averaged 93 mph. That's okay but not overpowering, but he's a strikeout machine, so what's the deal? 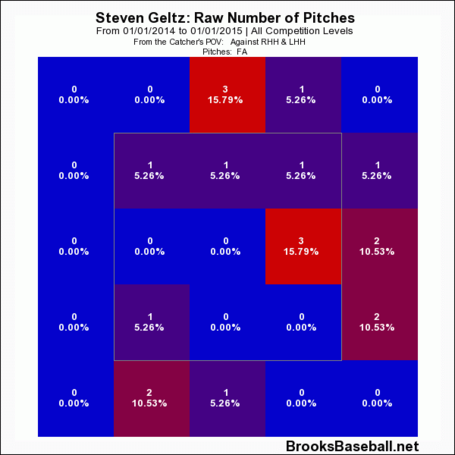 Steve Geltz has a four-seam fastball with a ton of upward movement, and he places it high in the zone where that movement can do its best work. It's the same trick that's fueled the strong seasons from Jake Odorizzi and Drew Smyly, and it's something we need to add to our conception of the "Rays Way."