Is the Rays front office at risk of losing talent?

For the second time this year, the Rays front office has produced front-office candidates for another franchise.

Share All sharing options for: Is the Rays front office at risk of losing talent?

On Saturday, it was reported that the Director of Player Personnel Matt Arnold* was under consideration with the Miami Marlins for a front office position.

Sources: #Marlins have spoken to #Rays director of player personnel Matt Arnold about a position in their front office.

Matt is a friend of the site, so we'd like to offer out congratulations on his consideration at multiple franchises! He provided a great interview with Tommy Rancel back in 2009 that you should definitely re-visit.

The report was confirmed by Bob Nightingale, who added the conversation was several weeks ago, while Joe Frisaro noted the Marlins are keen on delving into data analytics.

Arnold is not the only member of the front office to come under industry consideration this fall either.

Before the Milwaukee Brewers named David Stearns the youngest GM in baseball, they considered Chaim Bloom for the position. Bloom is one of two VP of Baseball Operations in the front office, working alongside Erik Neander. Both were rumored rumored alongside Matt Arnold for the Brewers position as well.

The Brewers were one of seven teams in the market for a GM this fall, with the Angels, Mariners, Red Sox, Marlins, Phillies, and Braves all needed to fill the position. Luckily enough, the Angels appear content without a Rays executive as they are poised to pull from the Yankees brain trust, and the Braves permanently installed John Coppolella to their GM opening from his interim basis.

The Red Sox promoted from within, and the Mariners brought on Jerry DiPoto last month. The Marlins and Phillies GM openings remain vacant.

If the Marlins succeed in hiring away Matt Arnold, the Rays will be at risk for a significant brain drain in the front office. Should the Rays be taking this on the nose? Why did they not add from other organizations last winter?

I ask because when Andrew Friedman left the organization, one important name also departed: Gerry Hunsicker, the former GM of the Houston Astros.

Hunsicker was the guiding voice when the new ownership group took over the Rays before the 2006 season, offering baseball intelligence to the new strategies of Andrew Friedman and Matt Silverman. He was hired for a three-year transition, but stayed as a critical aspect of the front office's decision making for a decade. In his advisory role, the Rays went from last place to first place and stayed competitive in most seasons.

His departure for the Dodgers preceded Friedman's, and might have played a role in the long-time GM's as well. When Hunsicker moved coasts, Friedman spoke of Hunsicker as instrumental:

"I am extremely grateful for all he has done for me and the Rays organization," executive vice president Andrew Friedman said in a statement. "He has been instrumental in the growth and development of our department, and I am proud of the successes we have enjoyed together."

Friedman was then quick to follow, and moved to a President role that oversaw the organization as a whole, hiring a full time GM out of the Athletics front office in Farhan Zaidi.

The Rays then adopted the same front office structure, moving Matt Silverman into a President role but did not install a General Manager. Those duties are presumably shared between Silverman and his two VPs of Baseball Operations, Neander and Bloom.

Prior to the promotions, Bloom and Neander were both Directors of Operations. Bloom served in a management position over player development, scouting, and contracts, while Neander focused on player personnel, as well as the team's research and development. As VPs, it is presumed they continue those duties but with more significance.

So did the Rays respond at all to the losses of Friedman and Hunsicker? The answer is yes, minimally.

In June of this year, the Rays hired Bobby Heck to a full time roll as a Special Assistant to the Baseball Operations staff. Before that move, he was merely a special assignment scout for the franchise.

Previously serving as the Assistant GM and Director of Scouting for the Astros from 2007-2012, his contract was not renewed after 2012 and his job was eventually divided between heralded blogger Kevin Goldstein and the young scout Mike Elias.

Joining the Rays in what likely was the Hunsicker role, it's not anticipated that Heck will have the same influence. When the Rays new ownership group took over, Hunsicker sat at the press conference table alongside Stu Sternberg. Heck's voice will be important, but I'm not entirely sure of its prominence.

From there, it's not clear the Rays have any intentions of growing the front office, but should they?

Allow me to end with this aside. I am not saying that the Rays need another voice in the mix of the front office. Their structure is similar to that of the Red Sox, Braves, and Dodgers where a President resides over the organization, while a GM does the handy work, but in this case there are two VPs where many teams have one GM.

It works for this organization, and that's all fine and well, but as a thought experiment could the Rays add at the VP level if they wanted a new voice? 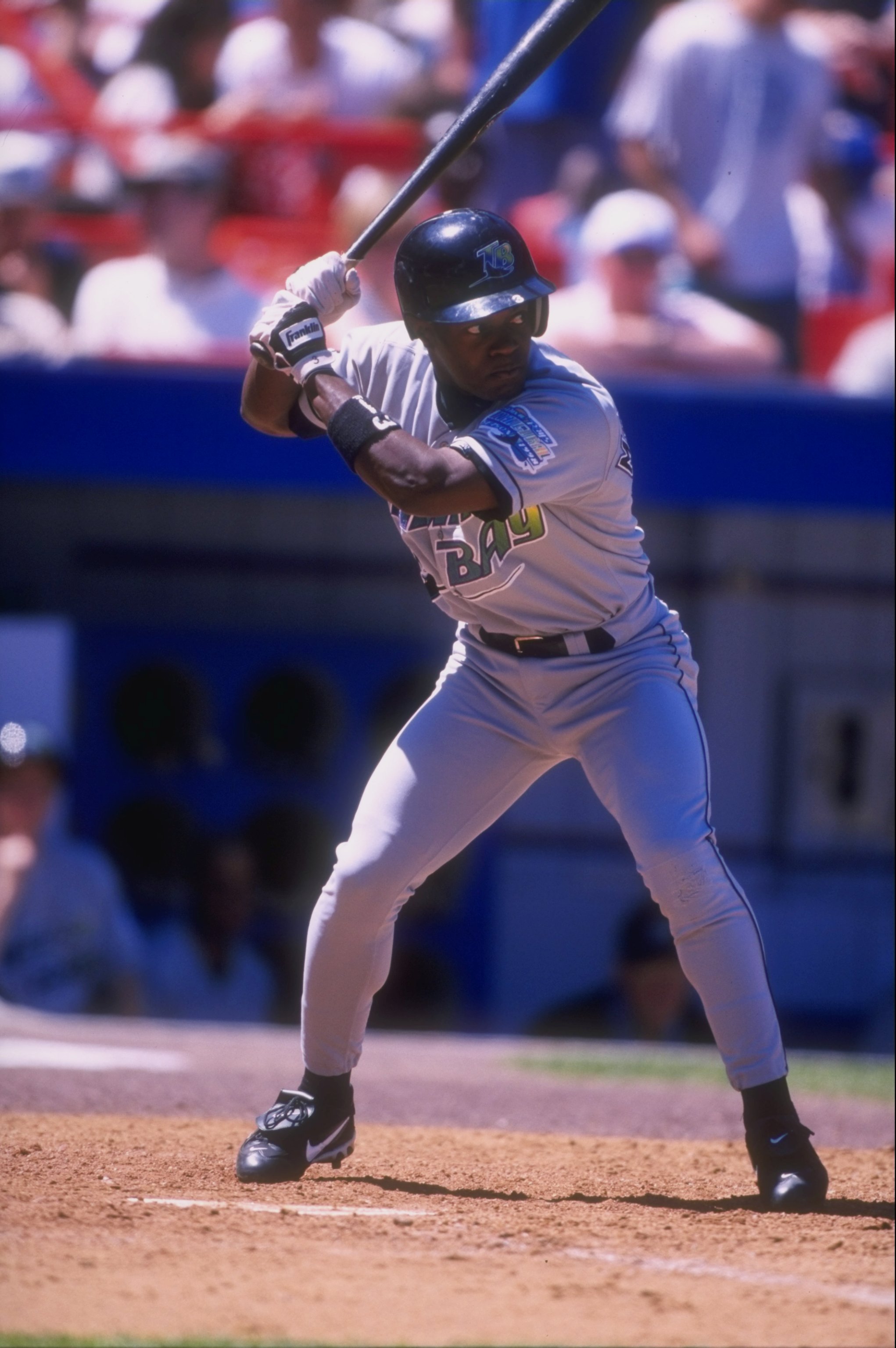 The original center fielder for the Tampa Bay Devil Rays, Quinton McCracken was recently a finalist for General Manager with the Boston Red Sox before they promoted from within. Currently an assistant GM under Jeff Lunhow in Houston as their Director of Player Development, I wonder if the Rays could do well by welcoming the former player back into the fold.

Tampa Bay has executives that oversee "Player Personnel" and Mitch Lukevics is the Director of Minor League Operations, but there is currently no staff listed over "Player Development," which is McCracken's current role with the Astros in an assistant-GM capacity. It's the same title other teams use for the role Gabe Kapler fills with the Dodgers, and likely the key responsibility of Rays VP Bloom. As the name suggests, it's all about making the franchise's players the most they can be.

Furthermore, the front office has members of the staff that once played ball, but with Rocco Baldelli transitioned to the field as the first base coach, there could be an added benefit to bringing a former major league player's voice into the fold.

The team is secretive, there is no doubt, and perhaps the position's role is already fulfilled by other front office members' duties. On the other hand, it could be an opportunity to bring someone tabbed as a future GM to expand the council of thinking at the top of the organization, and I swear it's not just the nostalgia talking.

I believe that between the three heads of Cerberus (Silverman, Bloom, Neander) there is plenty of knowledge and ability to lead the Tampa Bay Rays, but if the front office were to lose one of those three heads, the brain drain might reach a tipping point.

Why else might Quinton McCracken be a great fit? He was recently finalist with the Boston Red Sox for their GM opening, and judging by interviews on the process, he is an unique candidate, as he seemed willing to be part of a front office structure that submitted to a President:

"I was very impressed with Quinton McCracken," Dombrowski told Red Sox reporters. "Quinton McCracken is going to be a general manager. There is no doubt in my mind. He's got a lot of great qualities." [Houston Chronicle]

If you put your ear to the ground, you can find rumbles of other reasons McCracken was considered: that he oversaw an incredibly successful minor league system over the last three years, guiding talent imbued by the other staff to their vest use, and that he brings the experience of Jeff Luhnow's system in Houston.

Or maybe it was just that the Red Sox merely wanted to learn the way the Astros did business and pick up some trade secrets. That could be the very same reason Chaim Bloom and Matt Arnold are being so widely considered, or as I've been told, why some think former Rays bench coach Dave Martinez got so many interviews but so few jobs.

If we're being very cynical, perhaps the Red Sox were just checking the box of MLB's mandate to interview minorities for all positions. McCracken is African American and Fenway chairman Tom Werner was vocal about being sure to consider a black GM.

Whatever the Red Sox's reasons might have been for interviewing McCracken, Dombrowski still came away from the process with high praise for the current assistant GM in Houston, and he's not one to mince words or give spin to the press.

So if the Rays were to expand their front office in light of the talent already lost in Hunsicker and Friedman -- and that they may stand to lose should anyone be hired to GM another franchise -- I offer up Quinton McCracken as a possibility.

Joining the Rays in a VP position could be spun as a promotion, and I would imagine the Rays would be better off adding some new insight than not, even if it's just a pit stop on his way to General Managing a franchise in full, as Dombrowski swears he's destined to be.