Nick Franklin moved to second base.

The Rays intend on competing this season, even with the several short-term injuries in the starting rotation. They made that clear in December when they signed the top middle-infield free agent on the market to a $7.5 million contract. His name is Asdrubal Cabrera, and he is a short stop.

Cabrera has been on the decline the last few seasons, without many accolades from the primitive defensive metrics available on sites like Fangraphs and Baseball-Reference. Without the benefit of cameras to track the play and speed of athletes, we really only have the eye-test -- which includes the numbers you research. The Plus-Minus system, the backbone of so many advanced stats on defense, is based off eye-test evaluations. And it is by the eye-test most expected Cabrera to take over duties at second base for the rest of his career.

After six seasons at short with the Cleveland Indians, Cabrera was traded mid-year to the Washington Nationals to take over duties at second base and received rave reviews. Second base is a decidedly easier position to field than short, and Washington already deployed the excellent Ian Desmond at the position, giving Cabrera was in a best case scenario to impress -- and he did.

So why are the Rays moving Cabrera back to short stop? 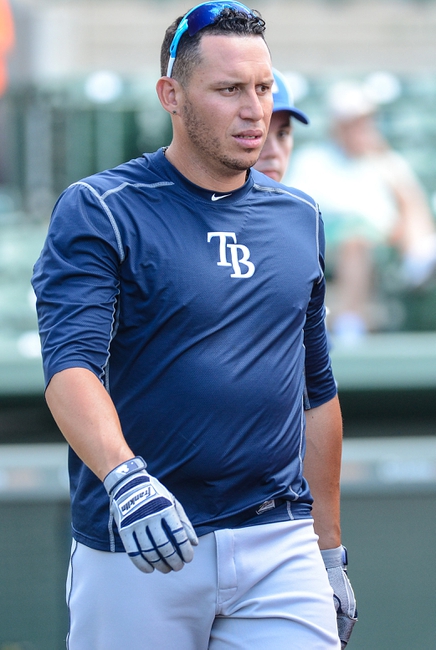 Second, Cabrera has a clear preference to stay at the position, which he made known to the Rays and reporters a few weeks into Spring. At the onset of camp he simply asked the Rays make a decision and stick to it all year, not wanting to transition between short and second all season based on matchups. Once the Rays were unable to dedicate him to one side or the other, he made known how he'd prefer short.

Third, no one outplayed Cabrera. Nick Franklin and Tim Beckham entered camp as the other short stops on the roster looking to steal a starting position for the 2015 Rays and neither were able to exceed the performance of the smooth-playing Cabrera.

And fourth, yes, Cabrera is a smooth fielder. There have been no complaints about Cabrera's arm or hands or instincts -- before he came to the Rays or after. Part of what should make Cabrera fun to watch this season is how well he fields the ball, the only question has been his range.

The Rays choosing to invest in a short stop who might seem behind a step is nothing new, this is the same brain trust that employed Yunel Escobar at short all of last season when his zone seemed to be shrinking throughout the year. As the fates would have it, after two off-season trades, Escobar is now the starting second baseman in Washington. You can't predict ball.

The important difference in here might be what to expect in 2015. According to Kevin Cash, who was a coach with Cleveland the last two seasons, playing up to his full potential range has been Cabrera's area of improvement this Spring, as recorded by Marc Topkin:

"[Cabrera] has not done anything this spring to look like he's lost range... this spring, I've had the benefit of seeing him his last two years in Cleveland, he looks better.

His body looks better. He's moving really well. He's made a couple nice plays where he is moving, soft line drives, a couple plays up the middle, and then a backhand play (last week) where he kind of pulled (first baseman James) Loney off the bag, but still he showed his range."

Cabrera made it his goal to gain back his range, reporting to camp lighter with a renewed focus for shortstop. He said the right things, stayed motivated by reports he'd lost his range, then kept his position. Is it that simple?

It's not like Cabrera is a skinny guy, but the most important take away here is not that Nick Franklin or Tim Beckham failed to win the short stop position, but that neither infielder outplayed Cabrera at the position.

The Rays believe they are moving forward with the best opportunity to succeed. There's not much more we can say than that. In the near future we will have access to much more defensively, with MLBAM rolling out cameras to track the play of defenders, but that's later.

With a Spring Training featuring an impressive Cabrera, four errors by Franklin, and two errors by Beckham, that gives the team confidence when the pitching is mired by injuries. For now, Kevin Cash says that Cabrera gives the Rays confidence, "solidifying in-game decision making." In the same audio clip, Cash confirms his intention to platoon Nick Franklin and Logan Forsythe at second base:

What's coming to pass for the Rays middle infield is probably what it was all along. An opportunity for Nick Franklin to rise above. He hasn't yet. I hope he does.