The announcement that Alex Cobb would start Opening Day against Baltimore on April 6 represented the beginning of a new era for the Rays pitching staff.

Cobb was to become the first pitcher other than James Shields or David Price to start opening day since Scott Kazmir in 2007. With Shield's departure prior to the 2013 season, and Price's at last year's trade deadline, the 27 year-old has emerged as the veteran leader of the staff.

Unfortunately, forearm tendinitis has sidelined Cobb temporarily and knocked him from taking the ball on Opening Day. The minor setback, though, cannot change the fact that heading in to 2015, Cobb is not only leading the Rays staff, but has arrived as one of the game's best young pitcher.

True, Cobb does not have the glove-thwapping velocity of Price, Kazmir, or now-Opening Day starter Chris Archer. That has not, however, stopped him joining the ranks of the American League's elite pitchers.

In 2014, Cobb ranked with the AL's best in several categories, including ERA (sixth), ERA- (seventh), WHIP (sixth), and Batting Average Against (fourth). Since the beginning of 2013, Cobb is third in ERA and sixth in ERA- among AL pitchers with at least 300 innings pitched (cherry picking, I know, but that is because Cobb is 15 innings short of ranking among qualified pitchers).

Heading in to this season, Cobb's numbers are trending extremely positively. His FIP, WHIP, and strikeout to walk ratio have improved for three consecutive seasons. Additionally, Cobb's walk percentage (6.9%), line drive percentage (16.4%), and home to run fly ball ratio (8.5%) were the best full season marks of his career,

Cobb has not risen to his current status on the strength of his fastball. Due to the average velocity mentioned above, Cobb only went to his four-seam fastball about 4% of the time in 2014. He has, however, increased his speed about two miles per hour (92.95) since 2012.

Last season, Cobb complimented his average velocity with an 88 MPH split-change(affectionately called "The Thing") that is his go-to strikeout pitch and one the toughest pitches to hit in baseball. Overall, Cobb throws his split-change with 38% frequency, among the highest in the league.  With the pitch, he holds opposing hitters to a .191 batting average and .257 slugging percentage, his best totals for any pitch. 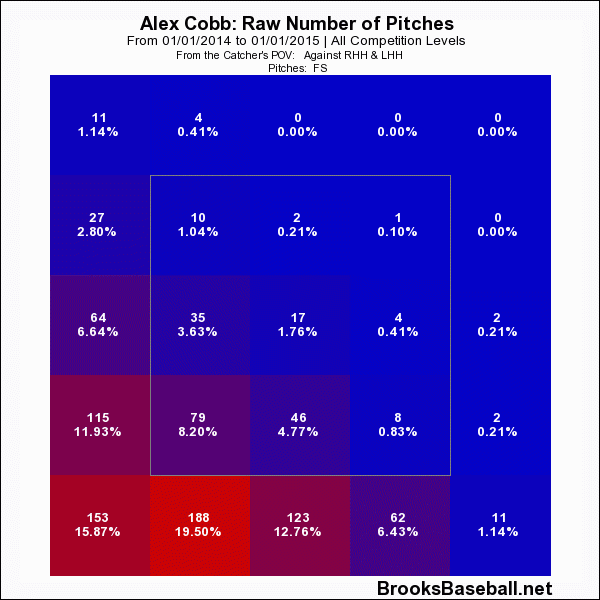 Now his strikeout pitch, Cobb went to the split-change 56% of the time with two-strikes, and the results justify the selection. In those situations, batters hit just .122 with a .168 slugging percentage.

Cobb picked up 69% of his total strikeouts (99/143) via The Thing, and when he reaches two strikes, Cobb pounds that bottom corner of the plate with even greater frequency. 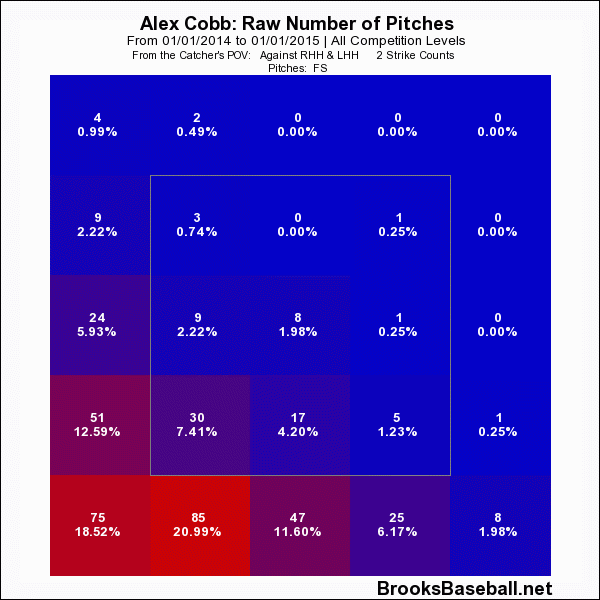 With the success of the pitch, it is interesting that Cobb still goes to his two-seam fastball so often, as in his career batters have had little trouble handling the pitch (.297 AVG and .438 SLG). In 2014, Cobb threw it just over 38% of the time, more than any other pitch, and hitters still had success (.281 AVG and .413 SLG).

Last season, Cobb's average two-seam fastball was just over 92 mph, and as the chart below demonstrates, he often leaves the pitch out over the middle of the plate and up in the zone. That is a dangerous combination over the long-term, and something to keep an eye on in 2015. 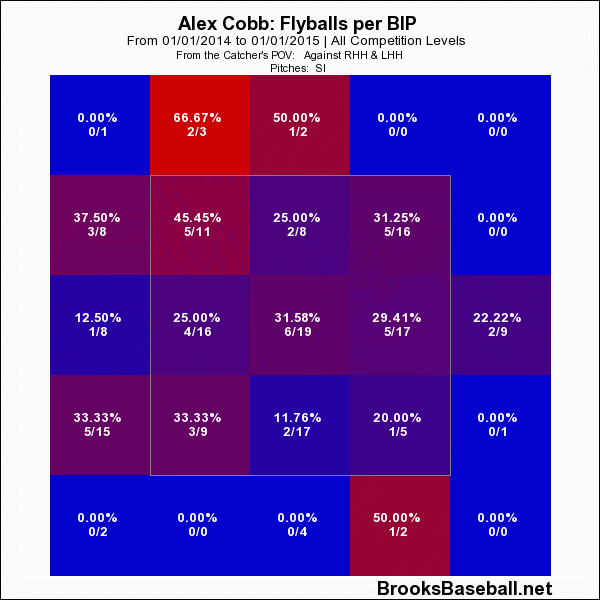 The forearm tendinitis suffered this spring raises the same old injury concerns that have dogged Cobb throughout his career.Thankfully, his recovery seems to be progressing.

As the leader of the staff, the Rays will likely need Cobb to increase his career-high 166.1 innings pitched in 2014. While it remains to be seen how Cobb will fare with the increased workload, we need only look to last season to how he responds to increasing his innings pitched. In 2014, Cobb topped his previous career high for innings pitched by 23 innings, and nearly all of his numbers improved in the second half of the season:

His numbers are trending in the right direction, and he is coming off a season with several career-best totals. The success predicted for the 2015 Tampa Bay Rays depends largely upon their defense and pitching, with Cobb and Archer leading the way.

Cobb might not be taking the hill Opening Day, but the right-hander will be vital to the Rays playoff hopes and is expected to return before the end of April.