Editor's Note: This is an April Fools joke. I promise.

Share All sharing options for: DRaysBay to change affiliation to Red Sox blog

It is with a glad heart and bright future that DRaysBay is changing its affiliation from the Tampa Bay Rays to the Boston Red Sox. This transition has been a long time coming, with my clear intention of only recruiting Boston based writers. It's about time it became a reality.

In the mean time, we will continue to put a couple more Rays things on the site for the straggling fans who still think we care about Tampa Bay, but be warned - you garbage monsters won't be wanted around here for much longer.

Henceforth, you may refer to this site as Under the Bleachers, the sister site to Over the Monster.

Who's on that cap? 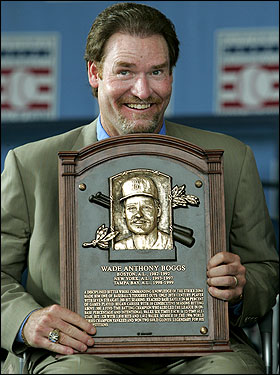 Even your legendary Wade Boggs belongs to the Red Sox

You're welcome to join the fandom as well, and root for a team with, you know, History!

and the glory days of Johnny Damon and Manny Ramirez, not that re-tread crap the Rays tried in 2011.

Maybe I'll return to the Trop one day, but only to visit the Ted Williams museum.

Get a real stadium.

Now if you need me, there's a green monster IPA I must attend to, followed by some Fenway franks over on Yawkey Way just a few days from now, and some of them dayum delicious Kayem Italian sausages.

Think it's time I got myself a David Ortiz shirtsy as well.

It will go well with that pink hat I got for Christmas.