Souza vs. Myers: Who's Been Better?

Share All sharing options for: Souza vs. Myers: Who's Been Better?

In the run-up to the 2015 season, a debate raged, or at least a polite discussion raged, among Tampa Bay Rays fans: Would you rather have Steven Souza, Jr. or Wil Myers? It was a logical question, as the former was essentially replacing the latter in the Rays outfield. This past December, a three team trade shipped Myers, 24,  to the San Diego Padres and brought Souza, 26,  from the Washington Nationals.

And it is only natural then that we would be comparing the two regularly, even if the season is still in its relative infancy. So with more than a month of the 2015 season completed, who is off to a better start?

Souza and Myers entered 2015 with a sizeable discrepancy in career plate appearances at the big league level. Myers (734) had more than a season's worth of plate appearances than Souza (26). To this point in the season, though, they have been very similar offensive players:

While the numbers are similar, the biggest difference that jumps out at you is Souza's strikeout percentage, which is double Myers'. Entering Wednesday night, Souza's strikeout rate was third worst in all of baseball.

Last year, at Triple-A Syracuse, Souza produced at an outstanding .350/.432/.590 clip, easily his best numbers in eight minor league seasons. In doing so, Souza cut his strikeout rate to 18.4%, making it only the second time he has been below 20.0% at any level.

So, what has happened the major league level? While in 2015 pitchers are throwing Souza a lot of breaking pitches (25% of all pitches on the season) and his whiff (swing and miss) rate is an extremely high 32%, his overall production against breaking pitches has been fairly strong (.269 AVG and .423 SLG). What has plagued Souza is right-handed pitchers who throw hard.

Interestingly, both Souza and Myers have seen four-seam fastballs from right-handed pitchers more than any other pitch. How they have produced against this pitch, however has been quite different:

In 2013-2014, Myers had success against four-seamers from right-handers, hitting .322/.394/.553. In 2015, Myers is slightly below his career numbers, but has shown a consistent ability to take these pitches the other way (as we will cover below), while Souza has racked up the strikeouts.

However, despite the strikeouts, as our Ian Malinowski noted in his outstanding piece this week: "Overall he's (Souza) been good, due to some very real power, a willingness to take a walk, and a high BABIP, but the part of his batting line that's already stabilized shows a hitter who's being exploited by major league pitchers right now." Are the strikeouts an indication of a significant dip in production once his BABIP begins to drop?

While Souza's strikeouts certainly stand out, his and Myers's overall power numbers are similar despite different ball-in play rates:

Souza has been an extreme pull hitter, especially when it comes to power, with only one of his eight extra-base hits going to center or right: 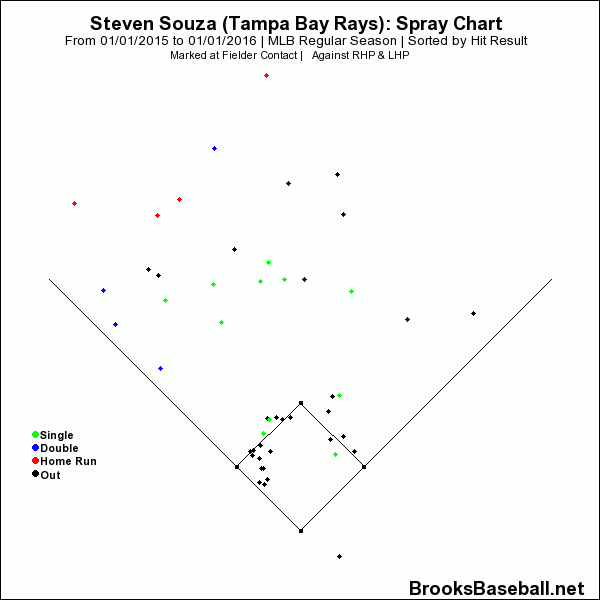 As you can see, Souza is wearing out the left side of the field. Souza must adjust and develop the ability to go the other way, as pitchers are living outside against him this season: 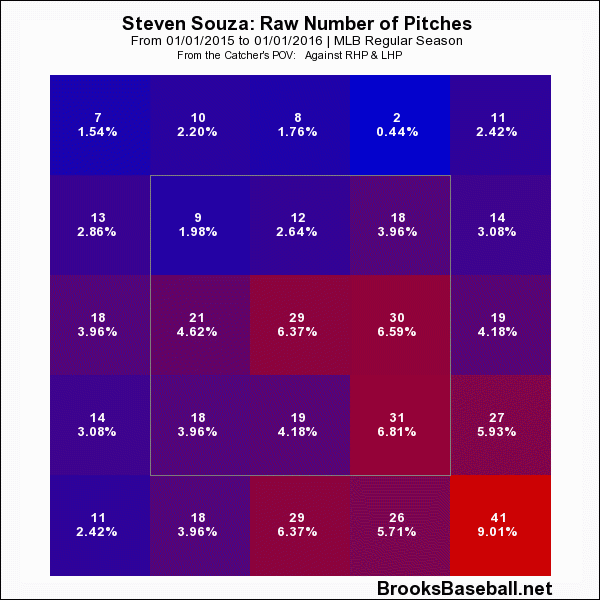 Meanwhile,  Myers has been utilizing the entire field. Seven of his eleven extra-base hits (64%) have been to center and right: 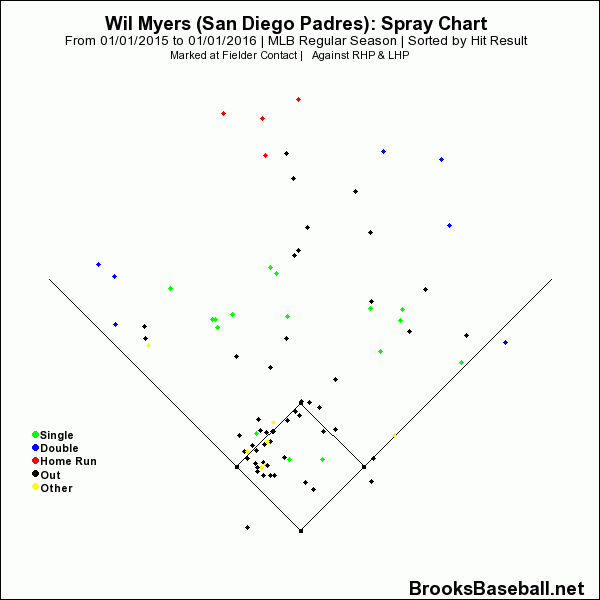 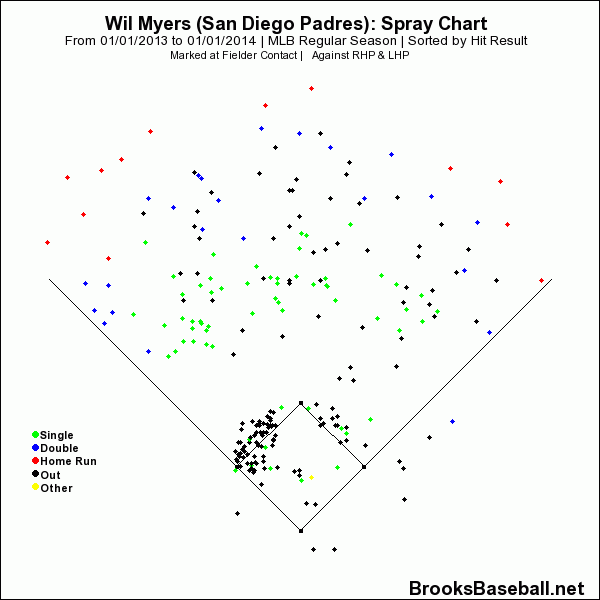 This year, Myers's .298 BABIP suggests sustainable production, and his strikeout rate is nearly five percent below his career rate (23.9%). It's early, but the trends are positive for Myers

Having said that, to this point in the season, Myers has a slight edge. The overall numbers have been fairly even, but Myers is using the whole field, has cut down on his strikeouts, and has a more sustainable BABIP. Of course, with just 134 career plate appearances, Souza will hopefully continue to build on his strong power numbers and ability to draw a walk.

Maybe you would take Myers through the first month of the season, but who would you rather have for the remainder of 2015?