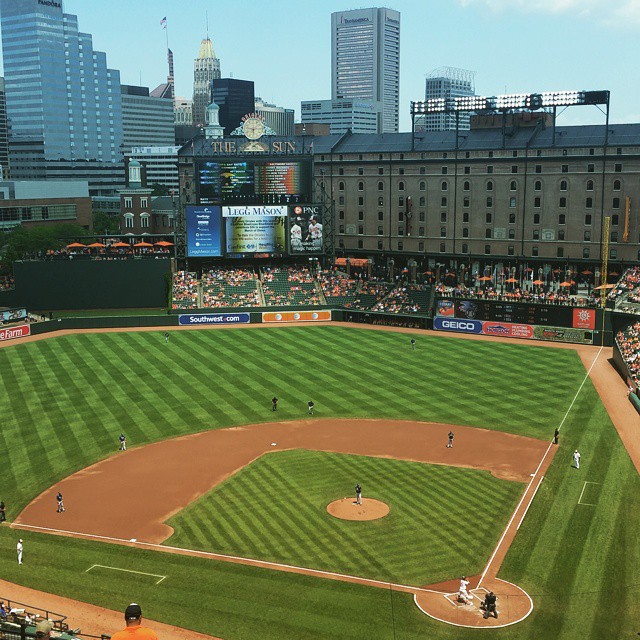 The view from my seats

This past Sunday I had the liberty of traveling from my home away from home in the Washington. D.C. metro area, to beautiful Baltimore, Maryland and Oriole Park at Camden Yards.

First opened in 1992, Camden Yards replaced the The World's Largest Outdoor Insane Asylum (a.k.a. Memorial Stadium), which got the ax in 2001 and is now a park/apartment complex. Camden Yards is located immediately next door to M&T Bank Stadium and about a 10-15 minute walk from Baltimore's beautiful Inner Harbor.

I grew up in every Rays fan's favorite city: St. Petersburg, Florida cheering on the Devil Rays through interesting times. After spending four years at the University of Florida, I moved to Arlington, Virginia in August of 2013 where I work full time, and attend law school in the evenings. Since living in the DMV, I have never seen the Rays play live, and finally decided it was time to round up the cabal and make the trek to Baltimore. On top of my love of baseball, I justified this trip based on relatively low gas prices.

Aside from the usual Sunday drivers, the trip to Baltimore could not have been easier. I got on Interstate 395 in Arlington, eventually merged onto the Baltimore-Washington Parkway, and was pulling up to Camden Yards in about 55 minutes. I did not pay one toll on the car ride over or back to Arlington. Not too shabby.

Parking at the stadium was also very accessible. I made one lap around the stadium in my car before biting the bullet, which meant paying $10 to park in one of the official stadium lots and walking five minutes to the ball park.

I won't spend too much time on this section other than to say that tickets were not expensive using Stubhub from my smart phone on the drive over. Lower level tickets were going around $20.00 on average, with upper level tickets going around $9.00 on average. I did a little research on the front end and discovered that the upper level would be shaded and scooped up five tickets together at $9.74 a piece.

It was also convenient that the tickets downloaded right to my phone and didn't need to be printed. The ushers scanned the tickets right from my phone.

Concessions at Camden Yards were about what was to be expected price wise.

I was told by some of my buddies back in D.C. that Boog's Barbecue was the place to eat when visiting an O's game. Named after popular former Orioles first baseman Boog Powell (0.266/0.361/0.462 and 39.0 WAR), I had a "when in Rome" moment and decided to sample the local delicacy.

Being the spontaneous millennial I am, I woke up on game day feeling especially cheeky and decided to starve myself so that I would be able to try more food once I actually got to the ball park. Needless to say, by the time I decided to hit up Boog's in the middle of the 3rd inning, I was ready to crush some dank grub. I ended up going with the BBQ beef sandwich which I ended up topping off with onions, horseradish, and a little barbecue sauce. The sandwich was served with Old Bay seasoned potato chips. All in, I paid just over $15 for the actual food itself. It was fantastic. Enough said.

The beer situation was also tolerable. Again, going off of the "real America" retro feel to Camden Yards, I decided to order a National Bohemian (dubbed Natty Boh by the locals of Baltimore). I bought a 16 oz. from a very friendly vendor for $8.95 who thanked me for making the trip to Baltimore. What can I say about the beer? It was 90 degrees, the beer was cold, and I crushed it. Works for me. My only complaint was that they didn't seem to sell them in deuce deuces (that is a 22 oz. beer for all of you cool kids).

If you ever have the opportunity, you really should visit this ballpark because it was absolutely beautiful from the architecture all the way to the seats. While the chairs on the upper decks did not have cup holders (I had to put my Natty Bohs on the ground like some pleb), the view of the field was fantastic. For a guy like me who is deathly afraid of heights, it really did not seem that high up at all outside of walking on the open concourse. I miss you Tropicana Field.

The fans around us were all extremely friendly, and I was thanked by more than one O's fan for supporting their stadium given the recent unpleasantness in Baltimore. Note to Yankees and Red Sox fans, this is how you behave toward opposing fans.

During the game, my friends and I discussed the current prospects of the Rays, KK's bad day (1/5 with 4 Ks), and just how bad Nick Franklin has been at batting, among other things. Both teams' offenses came to play, and it was an enjoyable afternoon with beautiful weather for America's pastime. 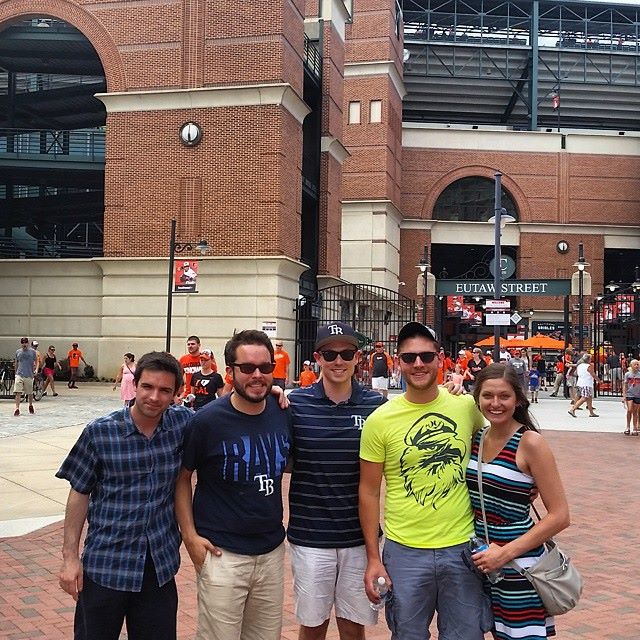 Rays Up outside Camden Yards.