(Note: I apologize that this took me so long to put together, as its a few weeks overdue)

My family and I recently had the pleasure of going to the Rays entire 4 game series against the Mariners earlier this month. This was both my first trip to Safeco Field, and my first trip to Washington State, or anywhere in the Pacific Northwest.

What can I say, other than the trip was long? As we were flying with two young children, a non-stop flight would have been a nightmare, so we built a layover into our plans for both legs of the trip. However, Southwest does offer one direct flight/day to/from Seattle for those interested in making the trip.

Its fairly common knowledge that it rains in Seattle. A lot. However, there is a dry season that begins in the early part of summer, and usually ends by late July. So when planning a trip, I'd be conscious of this, and hope for the best. Lucky for me, the weather Gods gifted me an entire week, where the temperature never fell below 50, never got above 80, and only rained (lightly) the first evening.

And that's good, because I'd pretty much put all my eggs in the good-weather basket. Instead of staying in a hotel, we'd opted to bring gear, and camp approximately one hour from the stadium. Coming from a state notorious for sprawl, it was amazing to be able to find such secluded spots of nature within an hour of the city. The site and park we stayed at were immaculate. 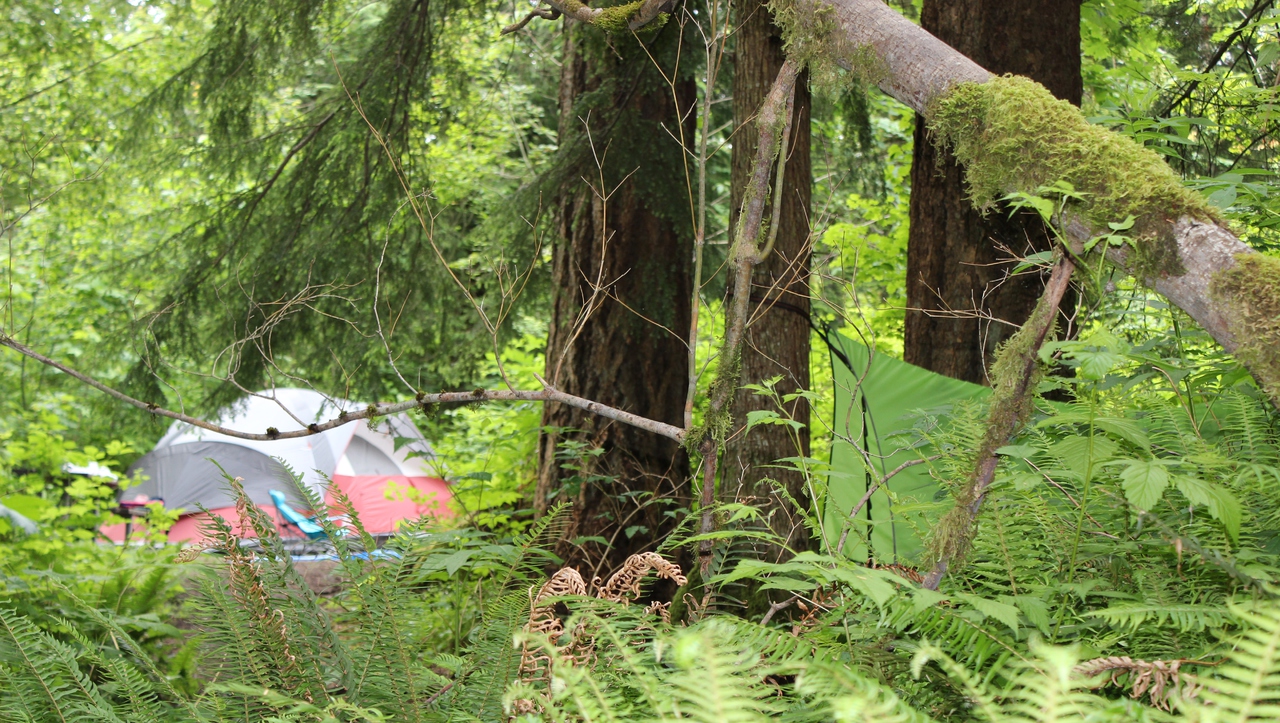 Over the 4 days we attended games at Safeco, we also managed to see Olympic Sculpture Park, the Museum of History and Industry, Discovery Park, Pikes Place Market, the Space Needle, and much more. 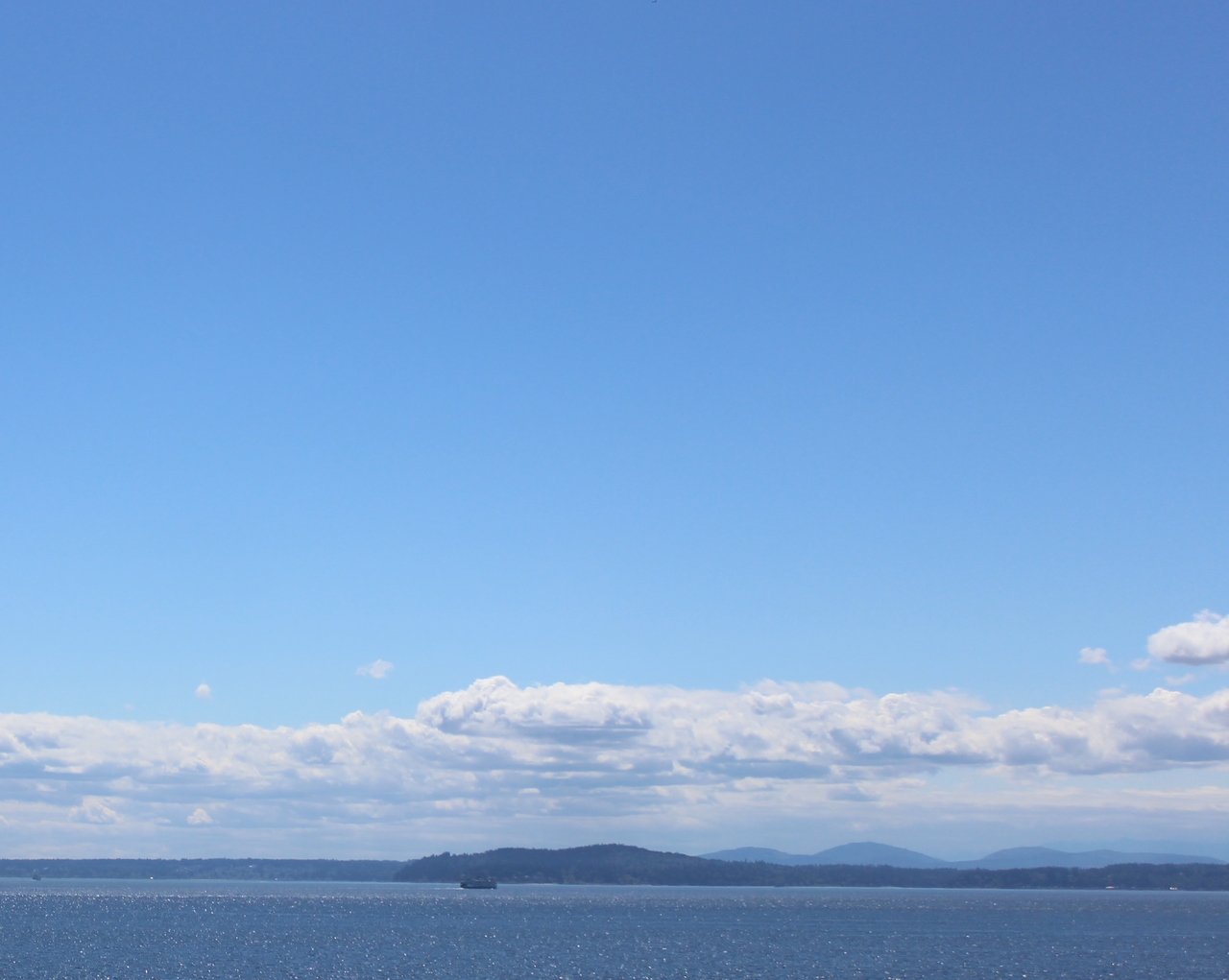 One of many great views to be found at Olympic Park

Traffic was never much of an issue. We came into town at varying times of day, and never had problems. The highways there seem to have a lot more HOV lanes and other traffic control mechanisms, which took a lot of the stress out of driving. Alternatively, if you’re wanting to stay downtown there is plenty of public transport that would mitigate the need to rent a car. 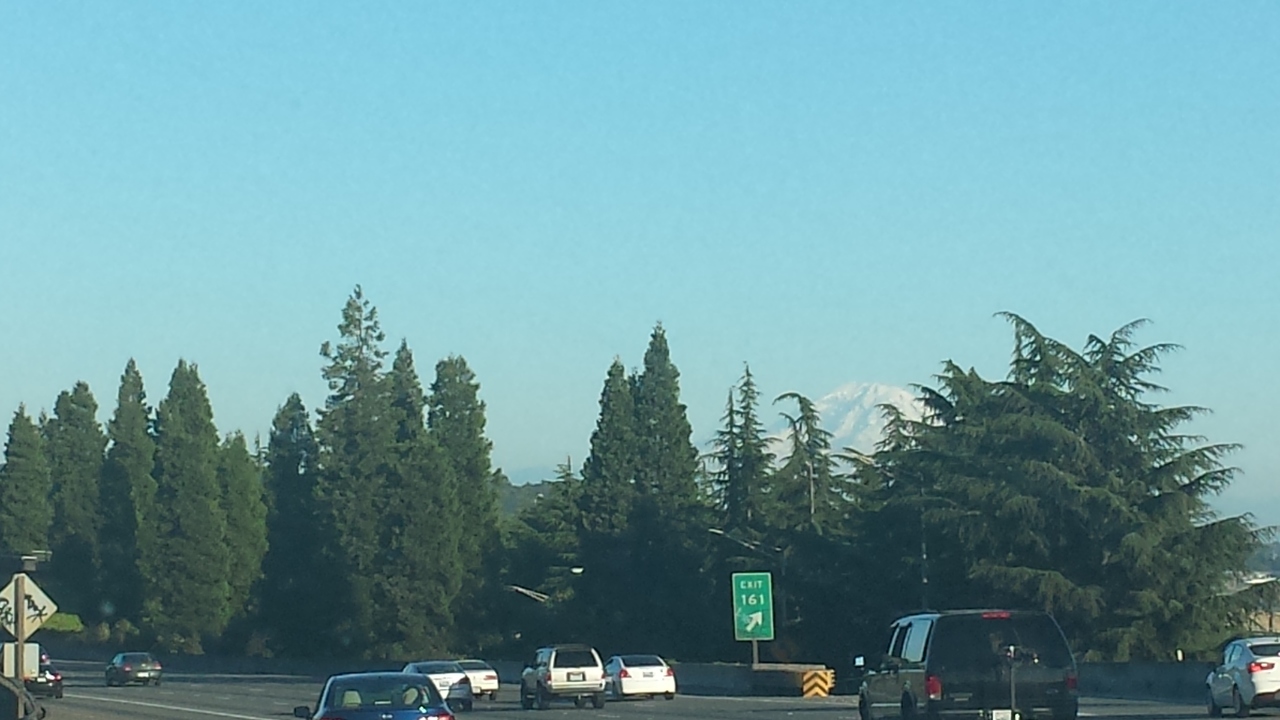 Light Sunday traffic, and a view of Mount Rainier

Despite the Mariner’s having very solid attendance, I did not find tickets particularly expensive. Though we were in the first few rows down the 3rd base line for each game, we never paid more than $100/seat, and paid as low as $50 for the Thursday game.

From what I saw, it doesn’t appear that there are typically any outfield seats worth buying. This is because the ones in right field all have a slow-setting sun in your face for the majority of the game . For those who have ever sat in right field at Turner Field, it is similar.. All of the seats in left field are essentially second deck seats that appear to be at least 30 feet over the action. Whether you’re buying on the lower level or the upper deck, I’d strongly recommend you stick to the 3rd base side, as they appear to be a much better value. There seemed to be a very good selection of third base side lower level seats for $50 or less. 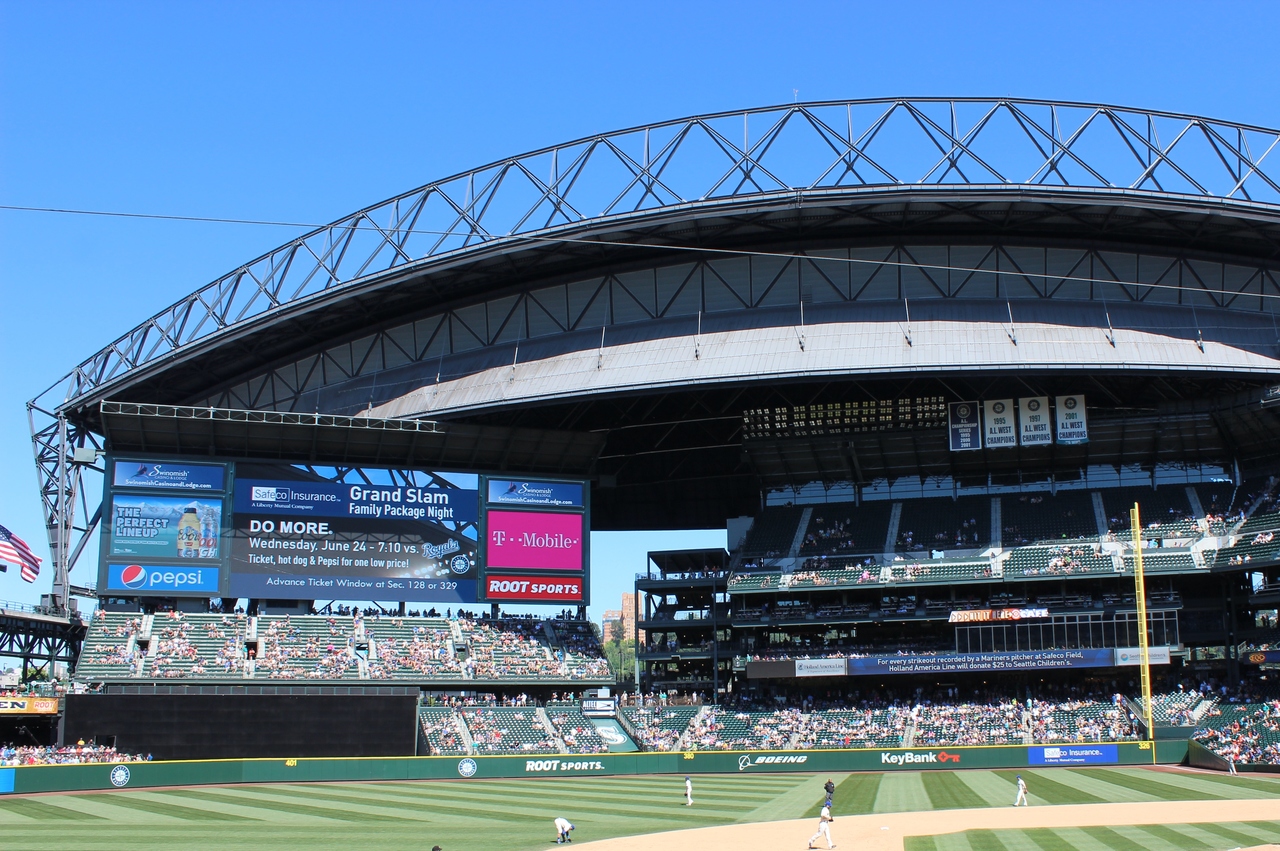 The Sun rains down iin right field until 9pm.

I would recommend is buying parking in advance (as in before you get to the stadium), as you really only have a few garages to choose from, and it appears that they fill up quickly.

Generally speaking, you don’t really have to put in work to find a local/craft brew. The vendors in the concourse nearly all have some sort of IPA as an alternative to Bud/Coors. Additionally, the walk-around beer men generally have tall boys of Sierra Nevada and Fat Tire Ale. The beer was competitively priced relative to the Trop, and the selection was somewhat overwhelming.

The food that I tried:

Garlic Fries – Available down the third base concourse. Clearly, very good, but I’m pretty sure that multiple parks sell these now.

Nachos – There is a place down the third base line that sells pulled pork nachos. The part I liked was that the nachos were actually nachos, rather than those scary yellow-circle things that they sell at movie theatres, and (unfortunately) sporting events.

Tacos – I got tacos from Edgar’s Cantina. They were dry, and lackluster. I’d take the ones from Taco Bus ten days out of ten.

Dungeness Crab Sandwich (pictured below) – This was one of the better items I got, which they sell out in center field. It was a crab (salad) sandwich. Typically, when you get this type of thing you expect it to be a mayonnaise sandwich with a little bit of crab thrown in. Nope, this one was flaky, and fresh. Very, very good. 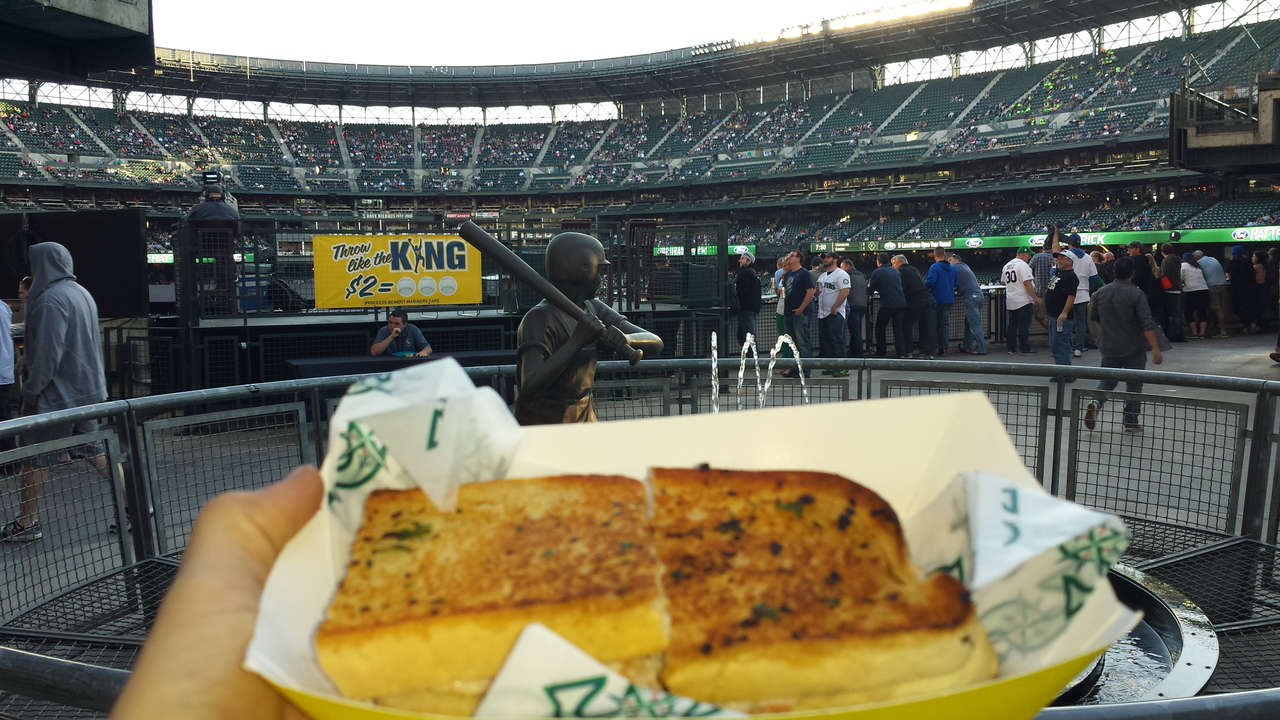 Ice Cream Bar – This was cool as well. In right field they have an ice cream bar where they give you a soft serve cup that you can fill/top to your heart’s content for $8. It was both a good deal, and tasty.

The park itself, is nice, but shares design elements with several other retractable roof stadium I’ve been to (Minute Maid/Marlins Park). And to a certain extent, once you’ve been to one open-concourse stadium built since 1995, you’ve really been to them all. One thing I will say in its favor, is that it ‘feels’ like an outdoor stadium that can have a roof over it, as opposed to an indoor stadium with a removable roof. All of the concourses were well lit with sunlight for the majority of the games. 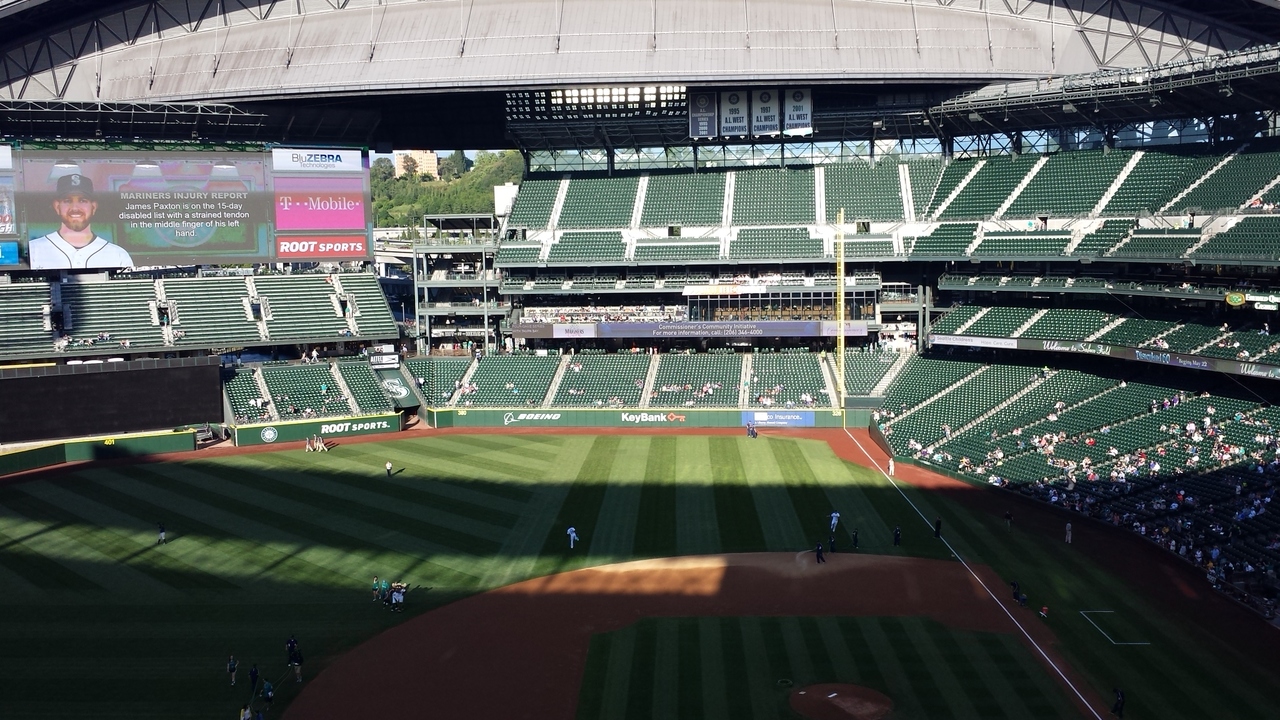 The view from the Right Field Upper Deck

As someone with small children, I was very impressed at all the things they do for kids/families. The ushers walk around with custom baseball cards of M’s players (and Mariner Moose) that they constantly hand out to kids. They also have a full-size playground in center field, a "Meet the Moose" kiosk next to it, and a gift shop that is dedicated to kids items only. For nursing mothers they have private rooms, that are indoors, and equipped with tv’s so that the moms don’t have to miss any game action while feeding the little ones. Finally, for every kid’s first game, they will print them a certificate commemorating the event, and listing everyone that came to the game with them. 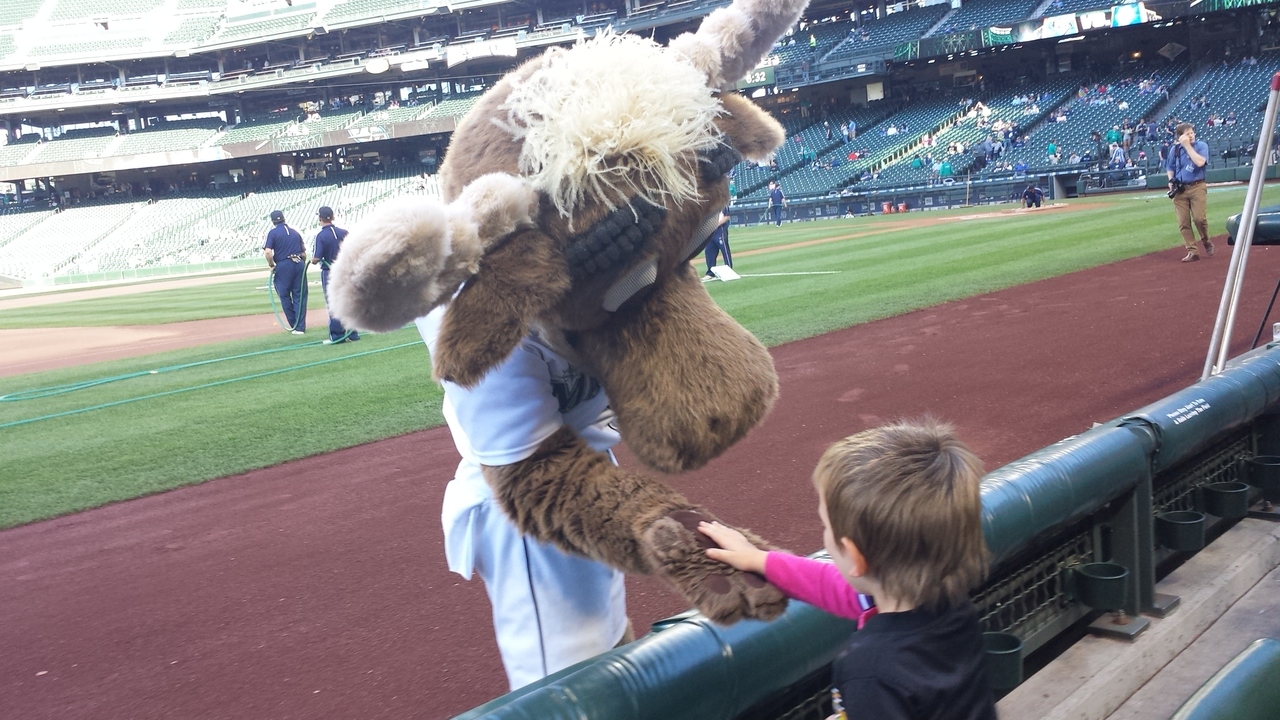 As for the rest of the experience, I appreciated that they always opened the gates 2.5 hours prior to first pitch to allow fans the chance to watch both teams take BP. I also noticed that as it concerned the premium seats, the ushers generally only actively policed the first 3-4 rows per section keeping a fair balance between fans chances to move down, and fans getting what they paid for. 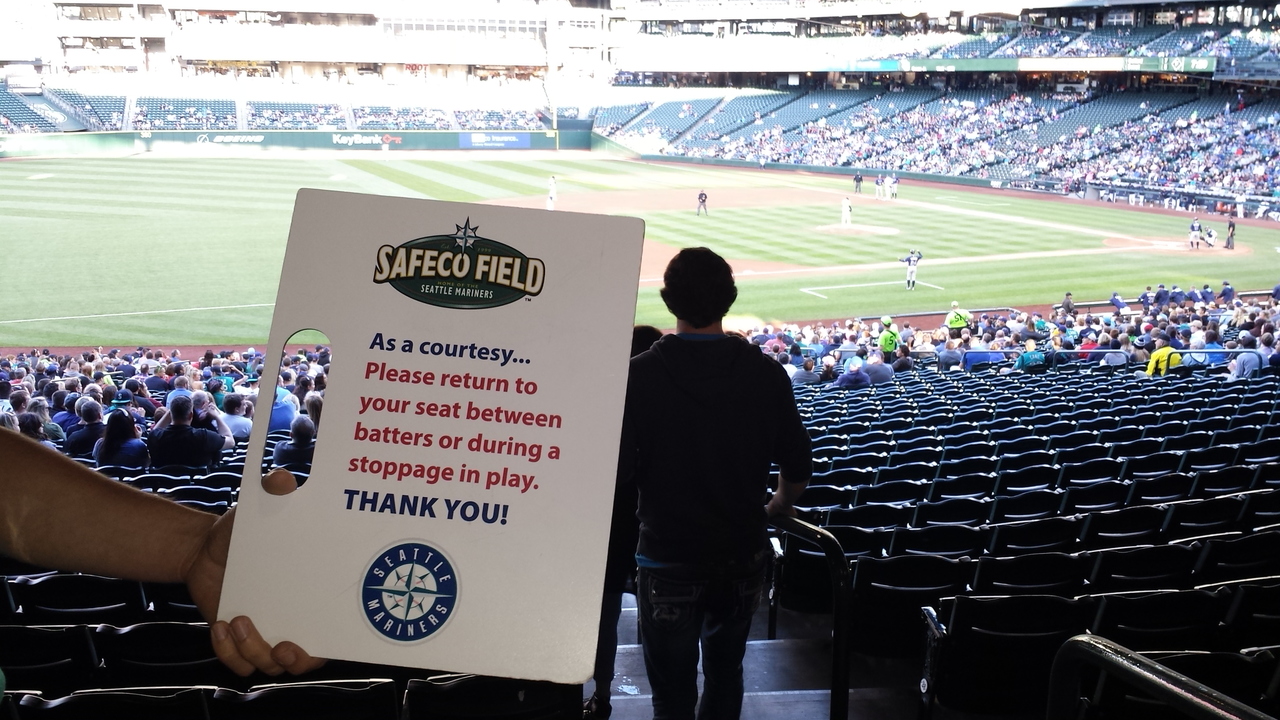 The fans themselves were amazing. In all four days I never heard a rude comment. Granted I was with my kids, but I was impressed nonetheless. On Sunday, during the singing of GBA, I had already summoned an ice cream vendor to our seats. However, once the song started I stopped what I was doing, and turned my attention to the field (and instructed my daughter to do likewise). Apparently the vendor continued to treat things as business as usual during GBA, and was apparently going to walk off. Unbeknownst to me, the Mariners fans in the row behind me just added my order onto theirs and bought ice cream for my kids so that I could continue to instruct my daughter to pay attention to the song. It was a very nice gesture, and very indicative of the type of fans they have. Aside from being nice, their fans seemed to be loud at appropriate times, and fairly knowledgeable about their team. 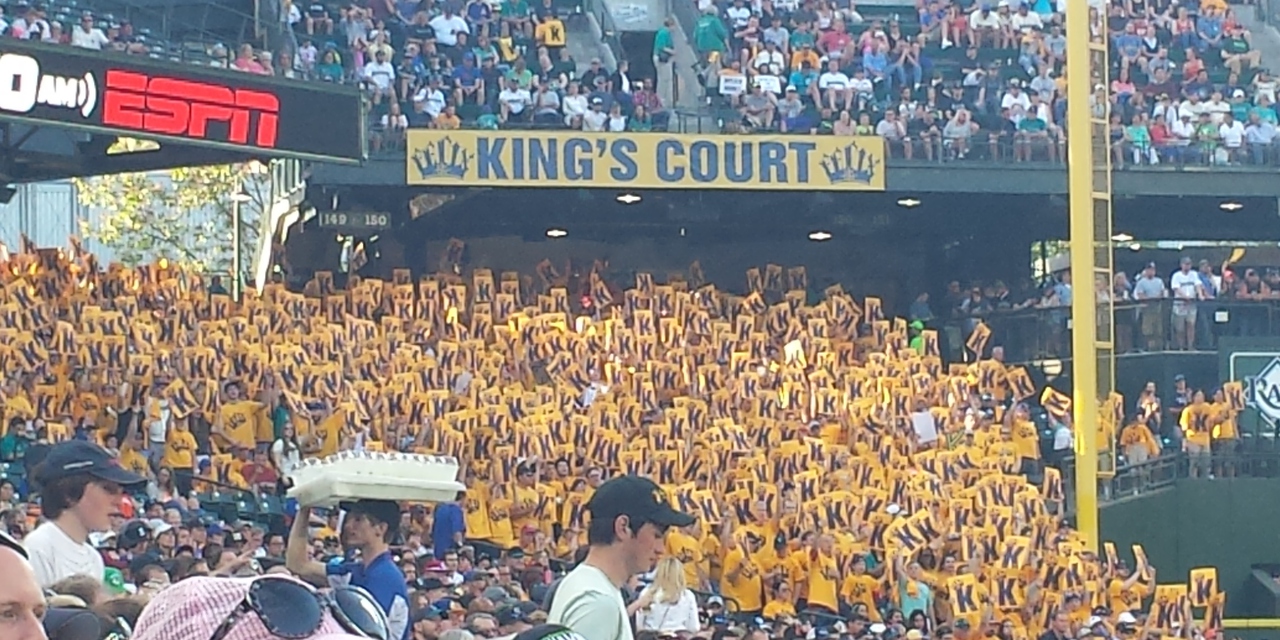 The Felix Hernandez seating section for his starts was impressive 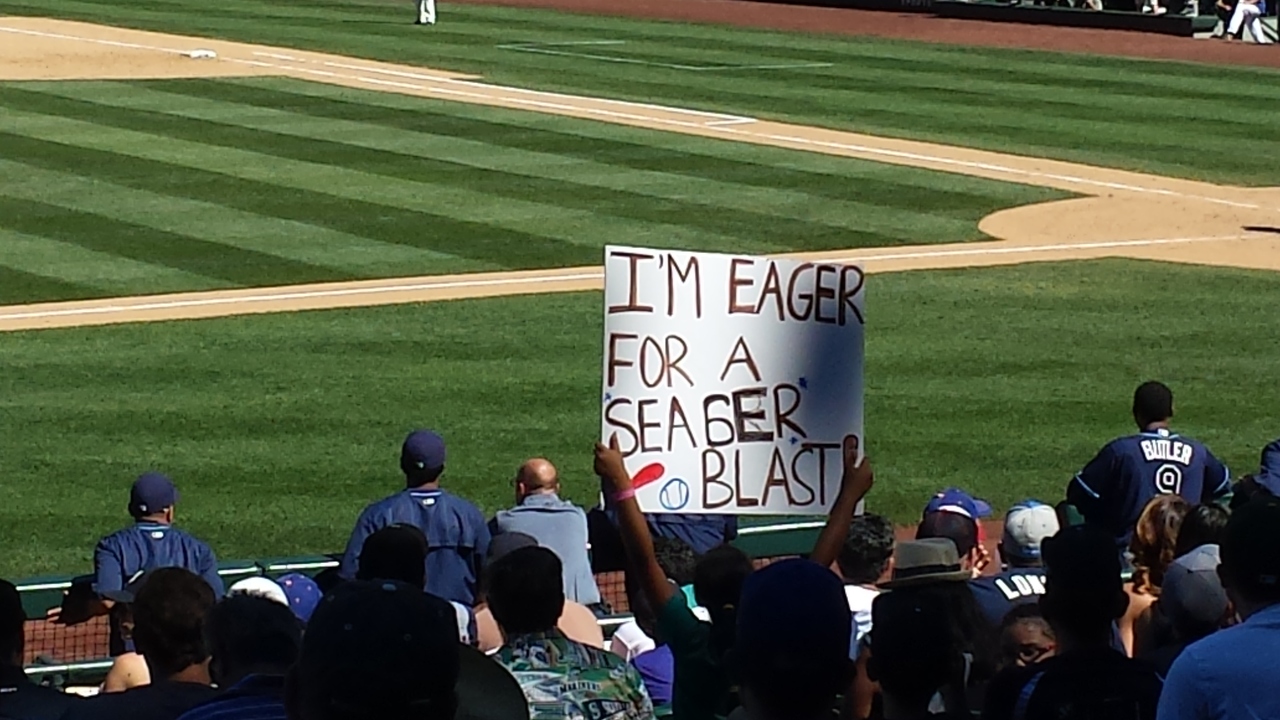 Finally, it helped that the Rays took 3 out of 4 in a series that was a set of crisp, evenly-matched, pitcher’s duels. 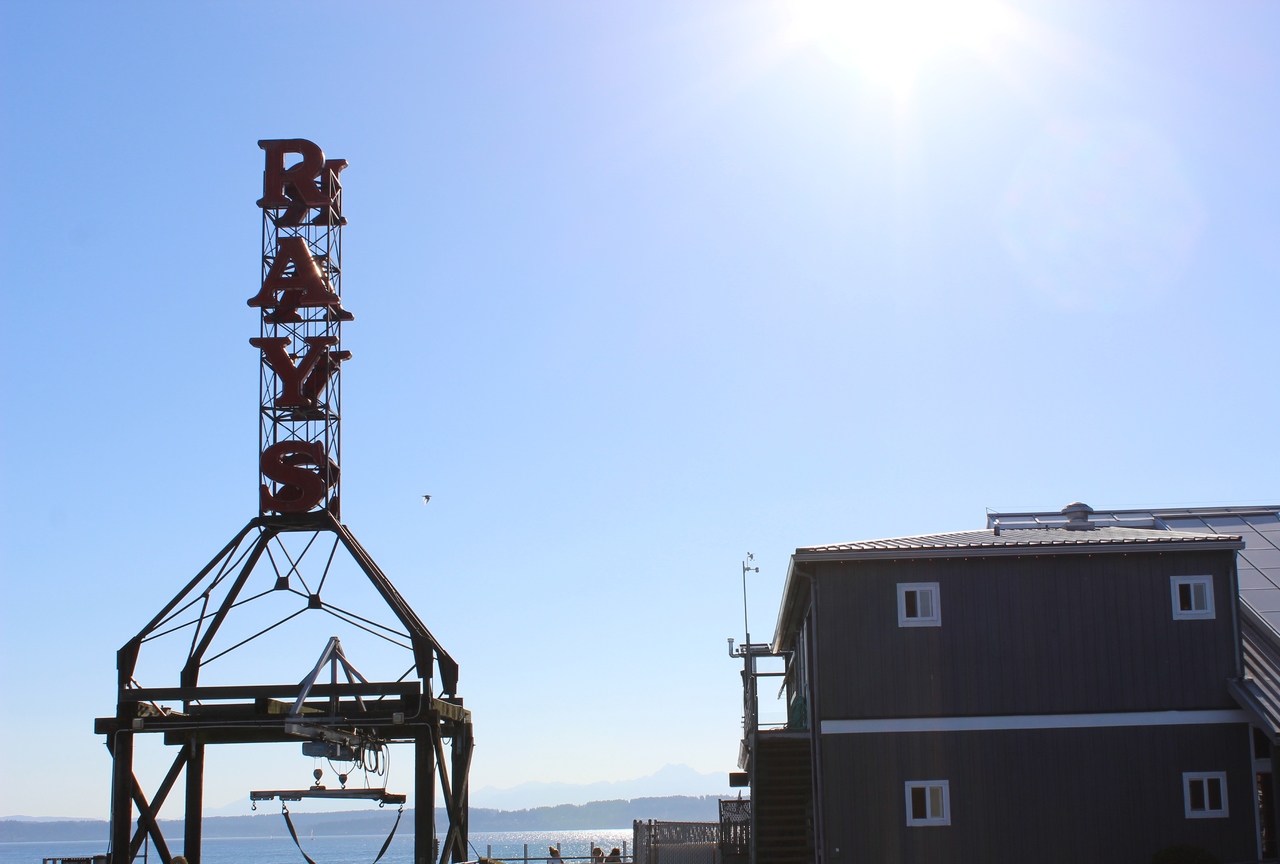 Rays Boathouse: A great dockside restaurant where Rays fans can feel at home.

Seattle is a great city to visit, with or without baseball. If you’re the type that likes to roll sporting events into a vacation, this is one of the better destinations you could go for a summertime series. So while I'm sure that a great amount of my opinion is heavily influenced by the weather and the city itself, I give Safeco Field very high marks.