Kevin Jepsen: Is he any good?

Share All sharing options for: Kevin Jepsen: Is he any good?

It is fairly simple question: Kevin Jepsen, is he any good?

Like any good question, though, it is so much more loaded than that, and it merits a more in-depth look.

Baseball, of course, is a results-oriented business, and if we go strictly by results through 72 games, Jepsen has been pretty good. Since the start of 2014—his last season in Anaheim—Jepsen has been among the most dependable and used relief pitchers in the American League, ranking third with 107 appearances.

In 2015, entering Friday's game against the Boston Red Sox, Jepsen has posted an excellent 2.70 ERA, and as of this writing, he ranks fourth in the AL with 35 appearances . He was dominant out of the gate, posting a 0.96 ERA and 0.429 WHIP in nine appearances in April.

So these numbers indicate that Jepsen turned a corner last year, became a better pitcher than he had been before, and picked up with the Rays right where he left off, right?

It wouldn't be fun if it were that simple.

Despite Jepsen's considerable success in 2014, his career-low BABIP (.263) was more than 80 points below his career average entering the season. Additionally, his career-high 79.2% left-on-base percentage was more than ten percent above his career average. That all means that he's reaching his fantastic ERA by having more of his balls-in-play fielded than is probably safe to expect, and by pitching best when the pressure is on, which is not necessarily sustainable, either.

Entering Tuesday night, Jepsen's BABIP in 2015 (.258) is more than 100 points below his career average. And among the fifteen Rays pitchers with at least 10 innings pitched entering Tuesday, Jepsen's 3.97 FIP ranks tenth on the team.

This season, Jepsen has thrown a lot of pitches. Among AL pitchers with at least 20 innings pitched, Jepsen throws the thirteenth most pitches per inning (17.8). It is nearly a pitch per inning higher than his career average (16.9), and currently the second highest average of his career. The high number of pitches is not a sign of a bad pitcher, in and of itself, as high-strikeout relievers like Andrew Miller, Dellin Betances, and Jake McGee all throw 15-16 pitches per inning. Jepsen's strikeout rate (19.4%), though, is below his career average, and nearly ten percent below his 2014 rate. So far this season, Jepsen is throwing more pitches, while striking out fewer batters.

Any examination of Jepsen's effectiveness must include a discussion of his four-seam fastball, which has been the dominant pitch throughout his career. Jepsen is going to the four-seamer slightly above his career average and getting good results:

Despite the success, the 110 point difference in BABIP suggests Jepsen could be in for a further regression as the season continues. As you can see below, Jepsen's four-seamer use has increased in each month of the season: 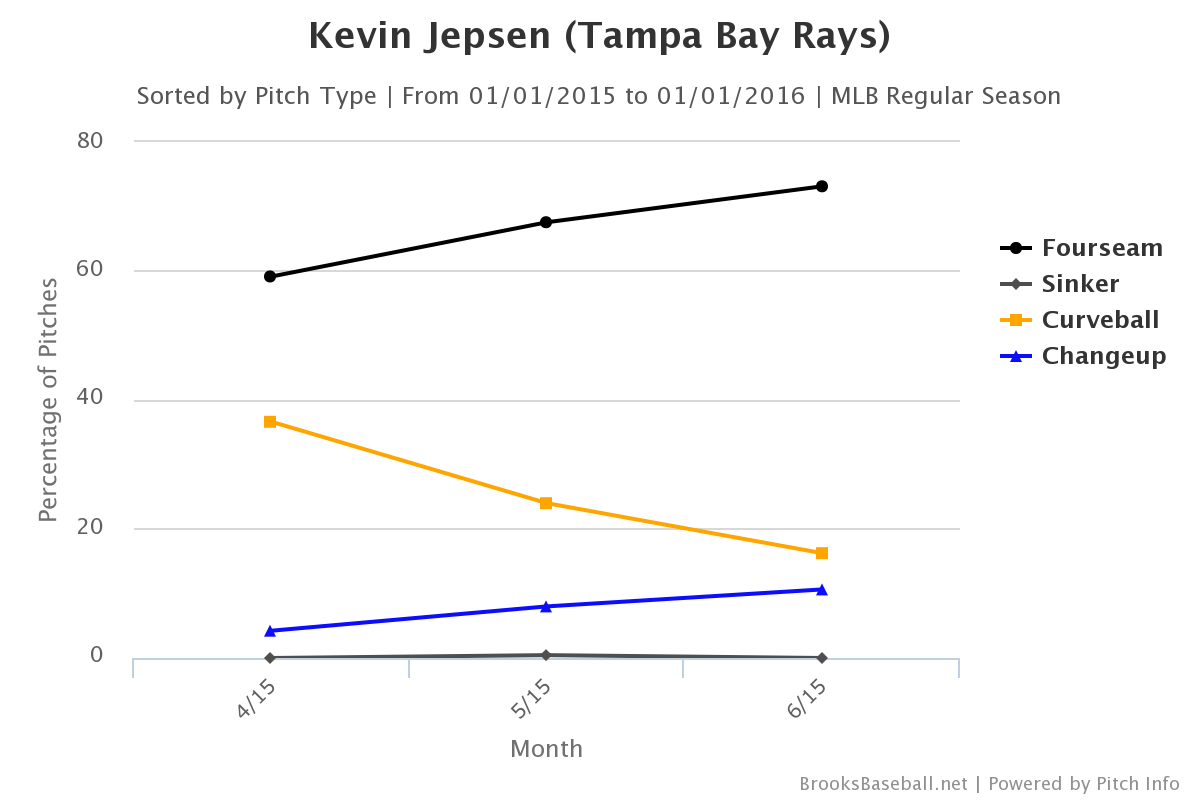 This same pattern has held true for 2015. This season, as Jepsen's fastball frequency and velocity have increased, his production with the pitch has decreased:

As he has seen diminished results from his four-seamer with increased usage, not surprisingly, his overall numbers have also declined steadily across the board:

And though it is a small sample size, since May 1, opposing batters are having little difficulty with Jepsen's four-seamer when he's left it up in the zone: 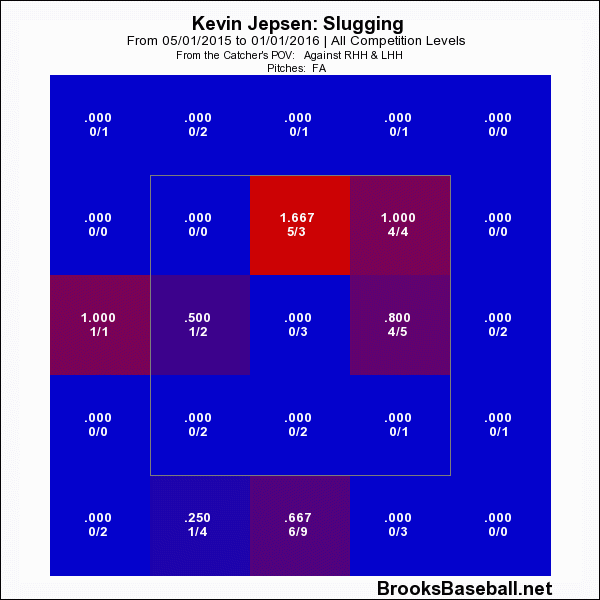 If Jepsen continues to find diminished results from a pitch he throws three-quarters of the time, his overall numbers will decline noticeably as the season wears on.

Obviously, we can parse and dissect Jepsen's first half from a hundred different angles. So far, Jepsen's overall results have been good. The numbers, however, have declined throughout the season. Like 2014, he is stranding runners at nearly ten percent above his career average, but he's allowing more baserunners than before, as his WHIP has increased from 1.05 to 1.37.

In 2015, though, Jepsen's FIP (3.97) and BABIP (.258) have gone in the other direction, and suggest a pitcher who has perhaps benefited from some good luck and the very good Rays defense. He has thrown a ton of pitches, while striking out batters below his career rates. Most worrisome, perhaps, his dominant pitch has been hit harder as the season has progressed.

Is what Jepsen has done since the start of his age-29 season his new normal? Prior to 2014, he was a slightly above-average reliever, pitching better than average in most years but struggling occasionally. The past season and a half has been the best stretch of his career, but since the beginning of May he has more closely resembled the average-to-sometimes-above-average pitcher he was from 2008-2013.

So, Kevin Jepsen: Is he any good? Hope so.