Share All sharing options for: Whiffs & K's: A Tale of Asdrubal Cabrera's Offense

Asdrubal Cabrera is just 29, but we could be witnessing the bottoming out of his offensive abilities. Through May of 2015,  Cabrera is hitting .211/.270/.327 with a 69 wRC+. Entering Monday, he owns the tenth worst OPS among qualified American League batters, and he is on pace for less than 40 extra base hits. And it has become even more dismal since; from May 17 to the end of the month, Cabrera was hitting just .167/.242/.300 with a 33% strikeout rate.

In 2013-2014, Cabrera production fell to a cumulative .241/.303/.394 with a 95 wRC+ and 2.3 fWAR. Despite the 70 point drop in his OPS, Cabrera still managed to average 50 extra-base hits per season and approached league average production. The Rays also must have been encouraged that during those two seasons his strikeout rate only increased slightly from his 2009-2012 peak 16.0% to 18.9%,) and his walk rate remained steady at 7.0%. In January, Tampa Bay signed Cabrera to a one-year, $7.5 million deal counting on his superior defensive play and solid power numbers.

So far, his defense has remained spectacular, grading in the top ten of the Fangraphs leaserboards, but his offense has dropped at the dramatic rate we detailed in the introduction. What has led to Cabrera's precipitous decline in 2015?

There are many factors, of course, but in a nut shell, Cabrera is struggling to make contact.

In 2015, Cabrera is seeing fastballs 61% of all pitches, and he is hitting just .211/.265/.326 with a 24.2% strikeout rate. As you will see below, his whiff rates have doubled and tripled, while his strikeouts have increased and his ball-in-play rates have decline significantly.

Overall, through May 2015, he has whiffed at 26% of all fastballs. This season, 80% of Cabrera's plate appearances have been against right-handed pitchers with him batting from the right side. As you can see below, prior to 2015, Cabrera has done an excellent job handling fastballs from the middle of the plate in: 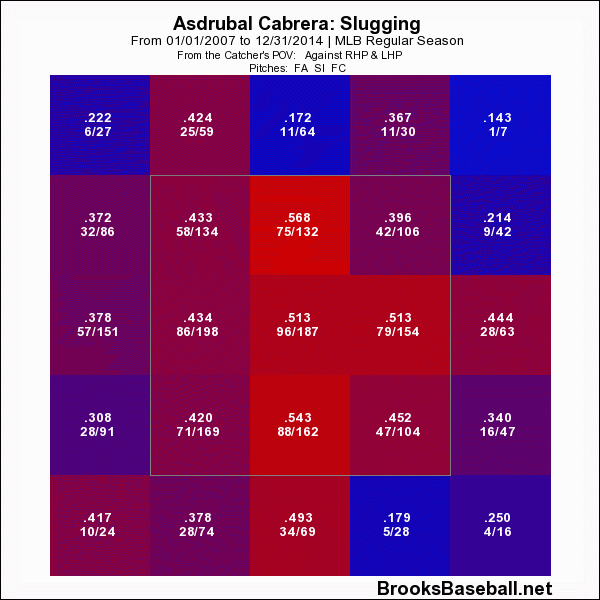 In 2015, though, Cabrera has struggled mightily against fastballs in those exact same locations: 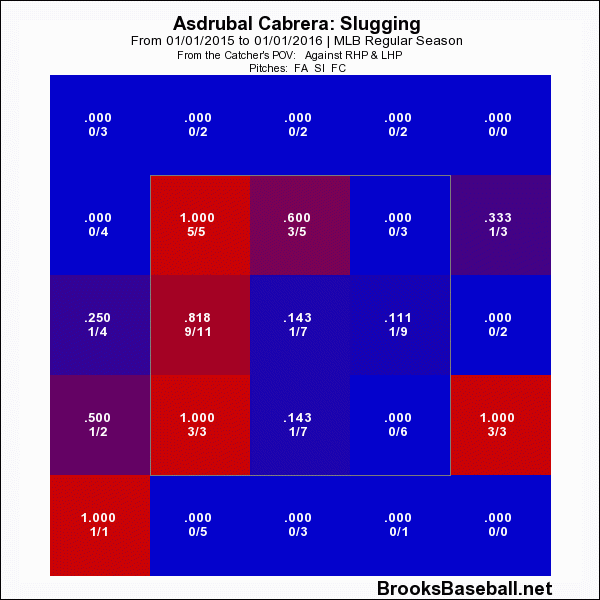 It is still a small sample size, but the with large majority of Cabrera's plate appearances coming from the left-side, it's clear he is struggling to handle fastballs on the inner-half of the plate. Cabrera is seeing fastballs roughly two-thirds of all pitches, and he is struggling to just make contact and put the ball in play. Is this a sign his bat has slowed down permanently?

If you are looking for a positive, Cabrera is still on pace for 25 doubles and 10 triples. Also, his defensive prowess still has him on track to being a two win player (0.6 fWAR through the team's first 51 games); however, the early returns of Cabrera's offensive game are not encouraging.