In July of 2013, Moore thoroughly dominated the Boston Red Sox

Share All sharing options for: The Best Game of Matt Moore's Career: 7/22/13

Matt Moore returned to the mound for the Tampa Bay Rays yesterday after Tommy John surgery in 2014. That's a big deal! It also wasn't his best start ever, so to inspire confidence and celebrate this long awaited moment in time, let's flash back two years to the best start of Matt Moore's major league career.

The Time and Place

In late July 2013, the Tampa Bay Rays were in the midst of a heated battle for the American League East title. The Rays awoke the morning of July 22 winners of five straight, including a three-game sweep in Toronto, and had closed the Red Sox division lead to 1.5 games. They arrived in Boston looking for Matt Moore to continue their winning ways and keep the pressure on the Red Sox.

All Moore did was pitch the best game of his major league career, before or since.

However, in the six games prior to facing Moore, the Red Sox offense had scored a total of just twenty runs. Moore, on the other hand, entered the game having won his previous five starts, posting a 1.05 WHIP, 1.91 ERA, and holding batters to .161/.269/.188. During that stretch, from June 20-July 11, Moore was dominating with all four of his pitches:

Two months earlier, on May 22, Moore had defeated the Red Sox in Tampa, but labored in the early innings. He lasted six innings, and allowed three earned runs on two walks and three hits. This night would be different.

When he faced the Red Sox on May 14, Moore went to his four-seamer just 22% of all pitches (22 of 100, easy math).  He also went to his curve 28% of the time. This time out, though, Moore took a drastically different approach.

One possible explanation is that Moore and catcher Jose Lobaton  wanted to use the Red Sox hitters patience to their advantage, throwing first pitch four-seamers to 22 of the 29 batters. In 2013, the Red Sox swung at fewer pitches in the strike zone than any team in the AL (62.4%). Additionally, the lineup Moore faced featured five hitters who averaged greater than 3.84 pitches per plate appearance (the league average in 2013), including Mike Napoli, who led all of baseball with 4.58 pitches.

Of the 29 batters the Red Sox sent to the plate, just five swung at the first pitch. Moore also set a career high with 27 called strikes. If they were going to take a pitch, why not try to get ahead with a fastball?

As a result, Moore and Lobaton spent the majority of the game living over the plate: 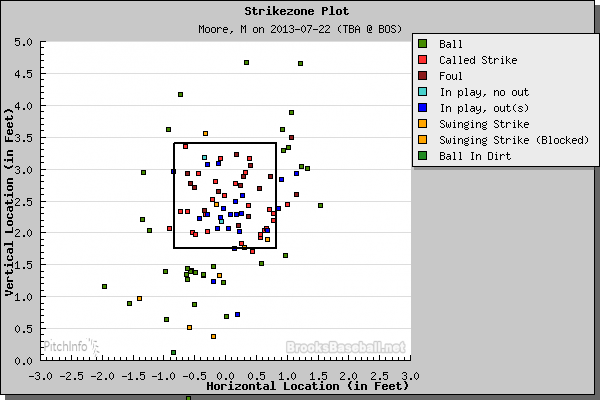 While Moore's change-up and curveball were not featured heavily (combined 27% of all pitches), he did use the pitches to pick up all four of his strikeouts.

As you could deduce from the numbers, and the fact we're talking about his best start ever, Moore was efficient. On the night, he had only three three-ball counts, and never needed more than 17 pitches to get through an inning. He needed only ten pitches to get through the first inning, and just thirteen to finish off the Red Sox in the ninth.

In the sixth inning, Moore required just six pitches to retire the Red Sox. Again, he stayed over the plate with four-seamer and sinkers, with fastballs accounting for all five pitches in the strike zone: 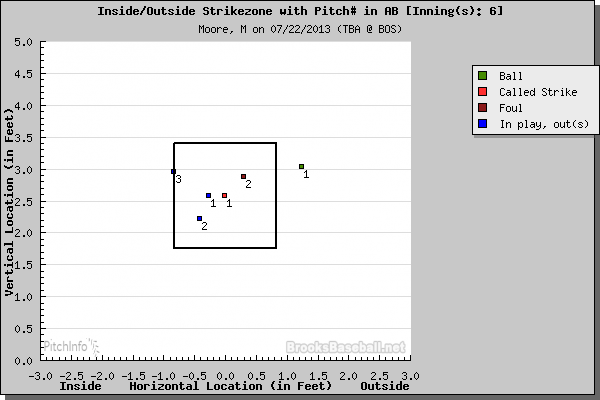 When a Red Sox batter did manage to reach base there was little threat of a rally. Of the three batters to reach base, just one reached second base.

In fact, there was never really a sequence when Moore wasn't in control. Mike Napoli walked on a full count to lead off the fifth inning. Two pitches later, though, Jonny Gomes rolled over a 93 MPH four-seamer off the outside corner for a 4-6-3 double play that immediately erased any Red Sox rally.

Even when David Oritz reached on a base hit through the shift in the seventh inning, there were two outs. He would move to second base on a wild pitch, but would be stranded when Moore induced Napoli to fly out to right field to end the momentary threat.

Offensively, James Loney led the way with a sacrifice fly and RBI single. Desmond Jennings would add a sac fly in the eighth for insurance, and the Rays came away with a 3-0 win over the division leaders.

Moore faced two batters over the minimum, and retired the last seven Red Sox hitters of the game. In the ninth, Moore would get Shane Victorino to line-out to Evan Longoria to end the game.

All four of Moore's strikeouts came on four consecutive batters in the second and third inning. After Mike Napoli singled to lead-off the second inning, Moore needed just 16 pitches to strikeout the side and then pick up the first out of the third inning. How he did it was a master's class in pitch sequencing. Take just a cursory look at each at-bat's pitch selection and location and you will notice a remarkably similar pattern to all four batters: 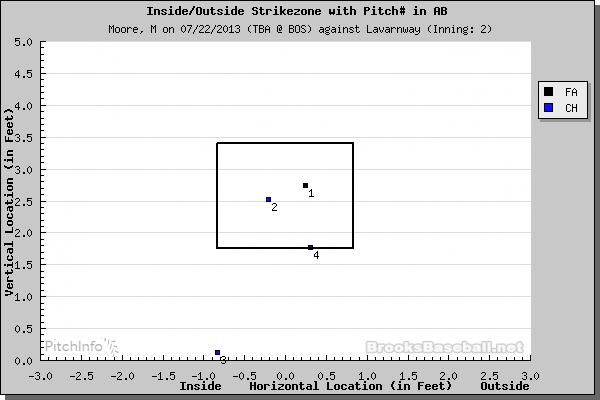 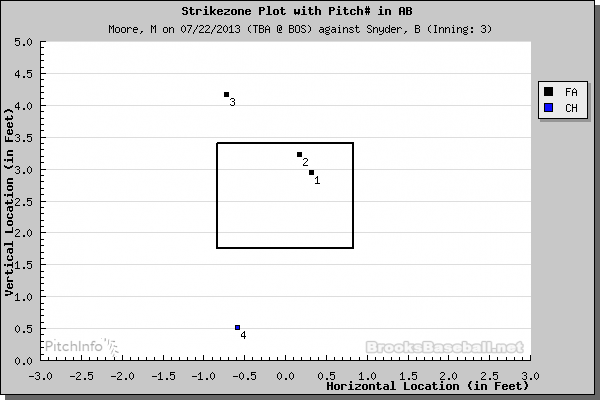 In 2013, Lavarnway was 3-for-8 against change-ups, but did strikeout twice. This was one such instance. 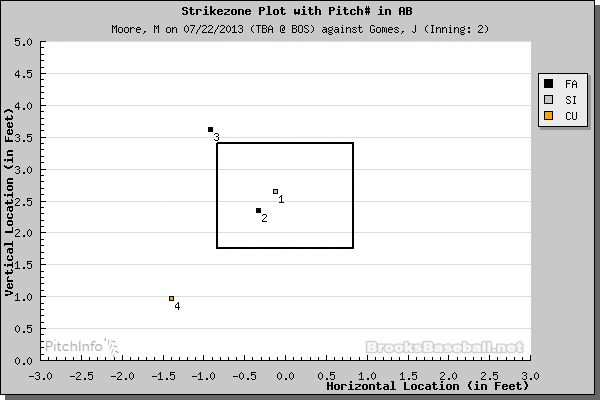 When Snyder did not chase the fastball upstairs on 0-2, Moore came back with a change-up in the dirt for strike three. Sensing a trend? 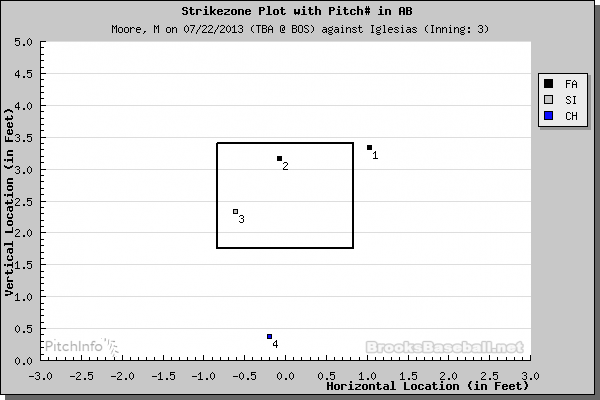 After getting ahead of each batter with sinkers and four-seamers up in the zone, Moore got each to chase on change-ups or curveballs low for swinging strike threes.This was no easy feat, as the 2013 Red Sox swung out just 28.2% of pitches outside the strike zone, third lowest in the AL.  On this night, Moore was able to effectively use his fastballs to set-up his change and curve. He was in total command, and seemed to be toying with Red Sox batters.

Speaking of toying with the competition, David Ortiz entered the game batting .321/.406/.605 in 2013. And in their previous encounters Ortiz had owned Moore, going 5-for-10 with a walk, two doubles, and a home run. Ortiz would prove a frustrating match-up for Moore, as has been the case with many Rays starters.

Moore had discovered this in May 14 start. On that day, Ortiz hammered a four-seamer that was left up on the inner-half of the plate into the right field stands for a three-run home run.

To Moore's credit, though, he was not fearful of going back to his four-seam fastball against Ortiz, throwing it eight of twelve pitches. However, when he did throw the four-seamer, he was sure not to miss with it on the inner-half of the plate: 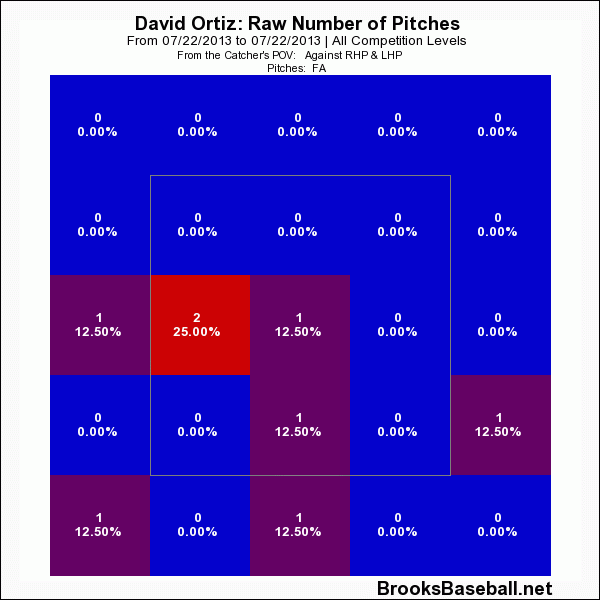 It made sense, when you consider what Ortiz did that season to four-seamers in those locations: 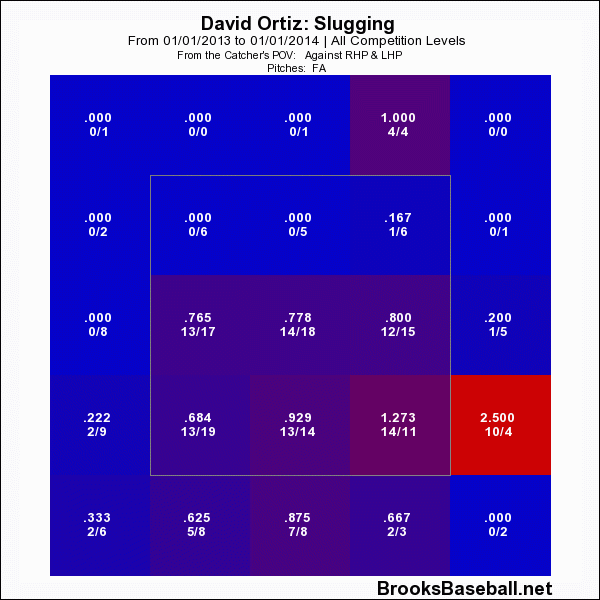 Moore, throwing him a steady diet of fastballs, kept Ortiz in check. The Red Sox DH would finish 1-for-3, with the seventh inning single that made it through the right-side of the infield. Moore learned his lesson from May, and stayed away from Ortiz.

Moore's brilliance continued the momentum for the surging Rays. By July 25, the Rays would lead the AL East by 0.5 game, a lead which they would keep through July 31. However, the 14-23 stretch that proceded would leave them trailing the Red Sox by as many as 9.5 games in mid-September. The Red Sox would win the AL East by 5.5 games.

Moore would record a no-decision in his next start at the New York Yankees on July 28, allowing five earned runs in five innings. A few days later, Moore would be placed on the DL with a soreness in his pitching elbow. He would not make a single start in August.

It wasn't amazing, but it wasn't as bad as it first seemed.

There were hits, but Tampa Bay drops another.

Moore would return in September, making six starts and posting a 2.79 ERA. He also, however, posted a 1.59 WHIP and 15% walk rate. The control issues would carry over to the postseason. Moore started Game One of the AL Division Series at Fenway Park. He held the Red Sox scoreless through three innings, but did allow two walks and a hit batter.

Moore owned a 1-0 lead entering the fourth, but the wheels would come off quickly. He lasted just 4.1 innings, allowing  eight runs (seven earned) on eight hits. He again attacked the Red Sox with mostly four-seam fastballs (70 of 102 pitches), but against the pitch they had five hits, including three doubles. Moore's velocity with the pitch had dropped nearly two miles per hour. It was a far cry from the command, efficiency, and dominance he displayed two-and-a-half months earlier.

On July 22, 2013, Matt Moore thoroughly dominated the Boston Red Sox.  Moore's masterpiece remains the first and only career complete game and shutout. Not surprisingly, it stands as the highest Game Score of his career (86). None of us know what 2015 and the future holds for Moore with the Rays, but the full breadth of his remarkable abilities were on display that summer night at Fenway Park.