People ask me what I do in winter when there's no baseball. I'll tell you what I do: I stare out the window and wait for spring. - Rogers Hornsby

(Note: This is the second of a multi-part series on Spring Training sites. If I missed anything, or you have any insider tips that I may have missed I’d love to hear about it in the comments below)

What’s better than a day off? A day off at a baseball game of course. Yesterday I was fortunate enough to get both, watching the Rays take on the Pirates at McKechnie Field in Bradenton, FL.

Before I start, I must confess that I strongly favor McKechnie. So much so that I buy a spring training season package every year, attend the weekend/Rays games, and sell the rest (more on that later). The tickets are cheap, the park maintains intimacy despite decent crowds, and the drive is very manageable from St. Petersburg. It probably also doesn’t hurt that unlike Dunedin/Tampa/Sarasota, buying a ticket isn’t aiding a division rival’s bottom line.

I’ve known for a while how much I enjoy McKechnie Field, and it is exciting to get the opportunity to share my enthusiasm for the park. At the same time, when you know you like something, you don’t often find yourself saying "What would I change about this?"

10 years ago, there wasn’t much of anything to do around the stadium, except possibly get breakfast at Popi’s Place, (a now defunct diner). However, recent years have seen a gentrification process take place, and now there are two breweries within a 10 minute walk (here and here). If a 10 minute drive isn’t a deal-breaker for some nostalgia, there is still Popi's Place Too.

There are multiple parking options, but my preferred spot is the lot behind left field. It costs $10, is much closer than the spot I got for the same money in Sarasota, and they give free golf cart rides from the lot to the main gates. Just look for someone wearing a red jacket and ask.

There are several seating options at McKechnie. There are lower box seats that run roughly 75%-85% of the combined length of the foul lines The upper level seating includes box-style seating (shaded, with seats very similar to those in Sarasota), as well as bleachers down each foul line. There are also 3 sections of bleachers in the outfield, which are shaded on the top half. 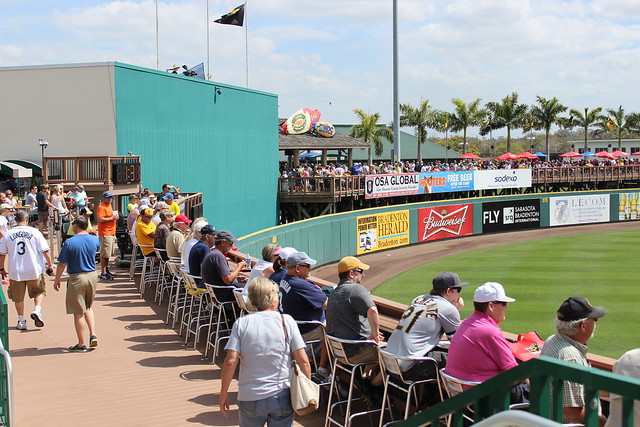 One of the best features of the stadium is the 360 degree design,, which allows you to walk the interior perimeter of the stadium, or get back to your seats from any direction you choose. They manage to pull this off without much overcrowding. In left field, there are bar stools against the outfield wall and in right field there are many covered picnic tables. All of this seating goes on a first-come, first served basis. If you’re looking to save money, you can turn your standing-room-only ticket into a front-row seat simply by arriving when the gates open.

No outside food is allowed at McKechnie. At the same time, I’ve never had a problem sneaking in a bag of peanuts, as the security staff is far from overbearing. Technically, you are only allowed to bring in sealed water bottles (up to one liter).

I’ve included a few pics of the menus to be found around the park. They have all of the standard stadium fare, at prices similar to what you’d expect elsewhere. They have also recently added a sandwich station, continuing the trend of healthy eating being made available at the ballpark, and a few unusual items such as Sonny’s Redneck Eggrolls (which are surprisingly good). 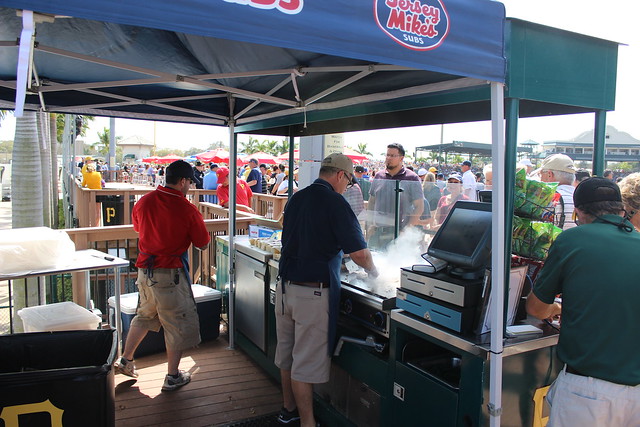 The longest food lines are for the Jersey Mike’s stands, which do grilled Sausage/Onions and Philly Cheese Steak. Both serve as ideal "hey I need something to go with this beer in my stomach," food.

You’ll need something to go with the beer in your stomach. I don’t know how else to put this: McKechnie Field is the best place to get tanked in the Grapefruit League. Not only do you get tons of Pennsylvania beer options, they offer them at great prices. 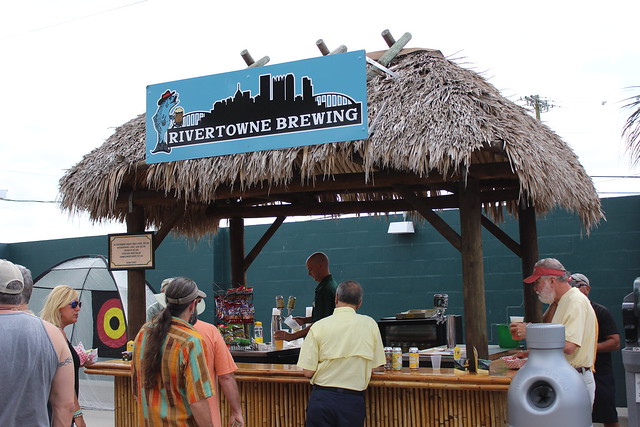 Pictured above is a stand for Rivertowne Brewing, found behind the first base concourse. At first blush, $9 seems eminently reasonable for 24 ounces of craft beer. That not enough beer for your money? Try the Yuengling Plaza Bar (below) in the right field corner, where they sell Yuengling products (including IPL and Black&Tan) for $8/24 ounces. 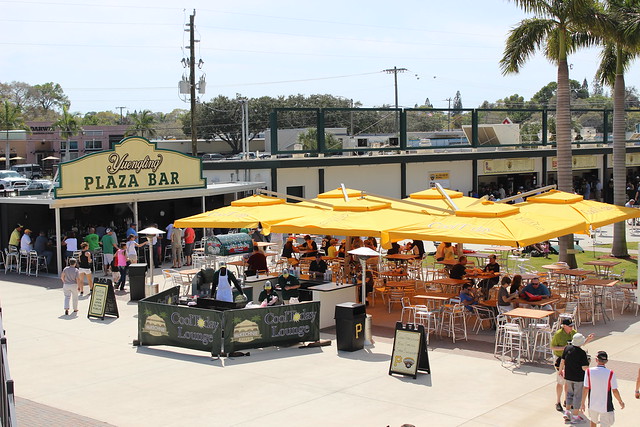 Finally, there is the Kona Bar on the right field boardwalk, where they sell draft domestics for $8/24oz, and Kona/imports for $9/24 oz. 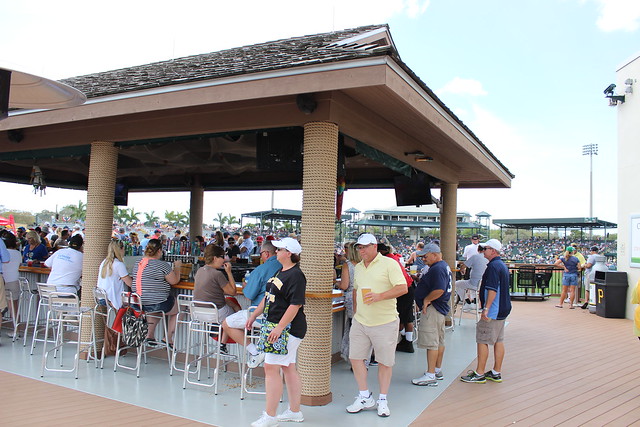 But none of what I’ve mentioned thus far is the best beer deal in the house. Because both the Yuengling Plaza bar and the Kona bar sell 32 ounce beers ($10 for all Yuengling/Domestic, and $11 for Kona/Imports). McKechnie is a fairly easy place to stumble into a hangover.

There are several design elements that work together to create an ideal environment for obtaining autographs/selfies/etc. First, unlike Sarasota, the clubhouses are not beneath the stadium. Thus players on either team have to walk down the foul lines to get to the clubhouse. Combine this with the fact that the bullpens are in the outfield (instead of down the lines). You’re talking about (give or take) 200 or so accessible feet down each line where would-be autograph hounds can try their luck during batting practice.

If that’s not enough, there is also a gated area down the left field line where people line up to catch the players as they are entering/exiting the clubhouse. Though I’ve never actually tried, I see other people waiting at these gates while the game is in action, presumably waiting on the starters to exit the game. 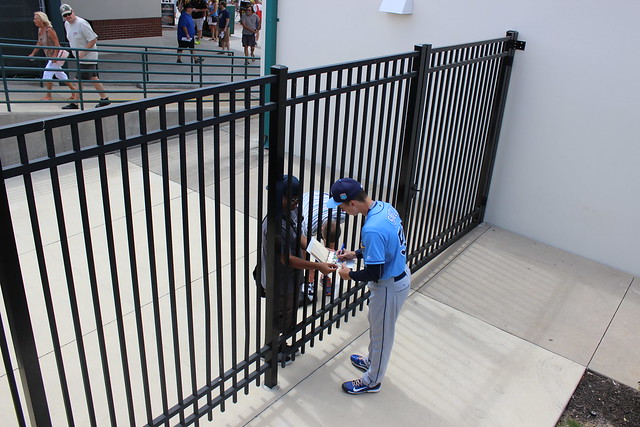 McKechnie is also a fairly easy place to walk home with a free baseball. During Batting practice most of those who arrive with gloves congregate in left field, either behind the bullpen or in front of the bleachers. The stadium is only about 5 miles from the Gulf (to the west), and left field is on the eastern side of the stadium. Because of the way sea breezes operate, as the temperature rises in the morning, the wind will blow out to left. As we saw yesterday guys with average power (like Taylor Motter) will hit mammoth shots into the bleachers, and guys like Andrew McCutchen will hit the ball clear out of the stadium (and into the parking lot i mentioned above. It’s a great place to tailgate and get a free ball, but try and see if you can park more towards center-field if you want to save your windshield)

Perhaps you just want to see the players in their element, putting in work. Behind right Field, there is a stairway you can take to go down and watch players taking cuts in the batting cages both before, and during the game. 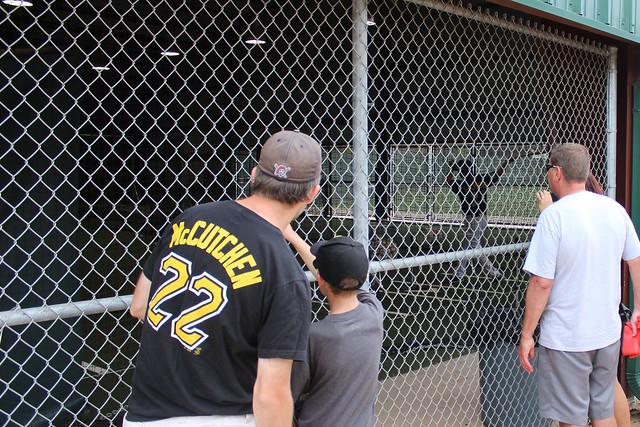 Also behind right field you can see the area where pitchers/catchers complete a lot of their conditioning work, and where players do various running/cone drills. 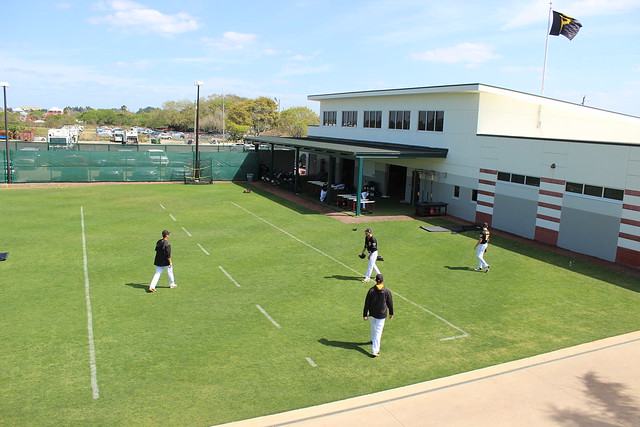 - McKechnie is a place that doesn’t have to fake its history. When you go there, you’re watching a game at the same field that was once home to Hornsby, Aaron, Clemente, Stargell, Bonds, and so many more.

- Despite its age, numerous renovations make it a great place to watch a game even today.

- It is very quiet during the game. Yes, there are silly promotions, and songs, but they don’t blare the PA, allowing fans to really sit back and enjoy the sounds of baseball.

- The roof over the main seating area is much higher than the seats, meaning that most of the non-bleacher seating is shaded. 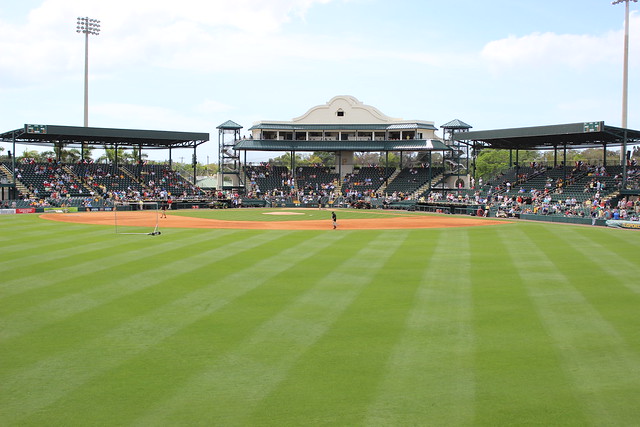 - The smoking section is below the boardwalk in dead center field. Its right next to a practice field and retention pond, meaning that they aren’t just sticking the smokers next to a dumpster somewhere. At the same time, it’s far enough removed that non-smokers never have to catch even the slightest whiff.

- While it offers a glimpse into the practice regiments of players, the actual training site is several miles away...a tradeoff for its urban location.

- Compared to some other Spring Training sites, the food menu is limited. Their plan is clearly to get everyone so drunk that this becomes a non-issue.

- The outfield bleachers are placed back from the fence to create a walkway. So people who paid for bleacher seats get an inferior view relative to the first-come first-served seats on the wall.

- It has no berm, and not much in the way of things to keep young kids occupied.

- If you plan on arriving near first-pitch, traffic over either bridge to the stadium is an issue. Anticipate major delays as gametime approaches.

If you’re looking for the total experience...ie showing up when the gates open, meeting players, downing a few, and catching a game at a beautiful location, then this place is for you. Honestly, if you’re a fan of baseball, this place is for you. The only group of people I can imagine would walk away from this place disappointed are sunbathing tee-totalers with refined palates. There are positives and negatives with every location. But for my tastes, McKechnie is one of the best places to watch a Spring Training game.

I just wanted to add that they have a very good season- ticket holder benefit package, that surpasses what some teams provide for regular-season packages at a fraction of the investment. Buying a package gets you:

- 30 minutes early entry into the stadium (2.5 rather than 2 hours, meaning you’re almost always there when the visiting team’s bus arrives, and well before the visitors take the field)

- Free banquet with autograph signings, and question/answer session with the GM and Manager.

- A free chance to take batting practice on the field after the team has packed up for Pittsburgh.

- Priority Playoff Ticket opportunities (obviously as a Rays fan I don’t care about this, but they are clearly trying to cultivate their snow-bird presence)

- For any game, the chance to pay $70 and shag fly balls with the Pirates on the field during BP.

- Reduced Parking/Concessions with no requirement to pre-load funds.