Last night I got the opportunity to catch the Rays in Sarasota, Florida at Ed Smith Stadium, spring home of the Baltimore Orioles. Ed Smith opened in 1989, which was also the year I started watching baseball. The place was brand new when my dad took me to my first spring training game between the White Sox and Yankees. I still fondly remember watching him catch a ball in batting practice, and getting my glove signed by Rickey Henderson. Since that time, I've tended to evaluate Spring Parks in light of that experience...i.e. I expect it to offer a level of intimacy and fan/player interaction that cannot be found during the regular season.

This was my first time visiting the park in several years, and I had not been there to witness the massive renovations, completed in 2010 to coincide with the arrival of the Orioles. This was also the first time I'd gone to a Spring Training park with the intent of writing a review of the facility. 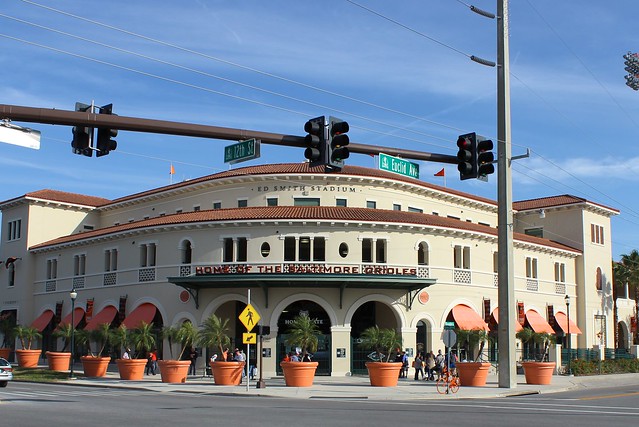 Granted, I'm not too familiar with the Sarasota area, or the surrounding neighborhoods, but nothing stuck out as particularly enticing. On one end the stadium and surrounding practice fields border a residential neighborhood, and on the other end there is what can best be described as an industrial area. If I were looking to grab a bite to eat before the Game, I'd likely stop in either downtown Sarasota (approximately 1 mile south), or at one of the many chain restaurants you pass near the interstate heading towards the stadium. Parking was reasonable, as I paid $10 to park in a lot that was approximately 1/4 mile from the main gates. 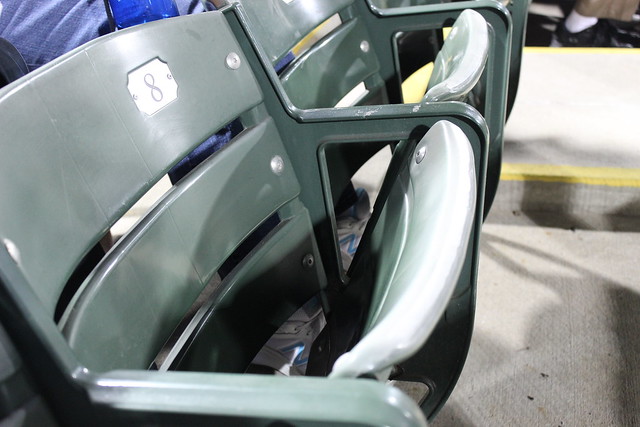 Essentially, there are 2 levels of seating, 100 and 200 sections, divided by a concourse, as well as a Left-Field Pavilion. As it is a closed concourse, the 200 level seating is about as close to the action as possible. For this reason, given the choice again I'm not sure I'd shell out for 100 level seats. Also of Note, is that when the Orioles renovated the field, they replaced every seat in the stadium with one from Camden Yards. 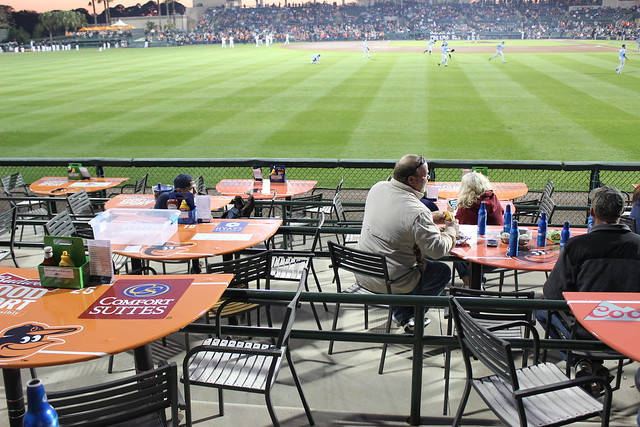 Though I did not have the opportunity to sit there, I was very intrigued by the left-field pavilion seating. Apparently these tabletop seats run $18 each, or $72 for a tale of 4. From my brief ticket search, it appears that these seats are in high demand, and seem to sell out long before the main sections. Everyone I spoke with claimed they are well worth the money, and seem to be akin to an experience you'd get at Green Monster seats, but without the nosebleed. 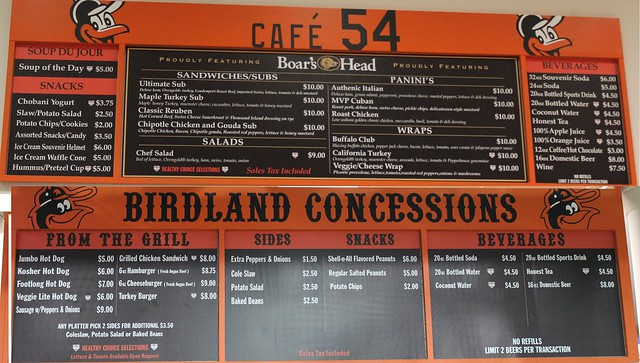 Above I've posted pictures from the menu's of their standard concessionaires. as well as Cafe 54, an indoor cafe under the concourse behind home plate. Though I didn't get to try anything from there, its generally hard to go wrong with Boar's Head, and I do appreciate that they had plenty of healthy food choices, something the Trop is sorely lacking. Additionally, they have a few stands that sell pre-cooked Chik-Fila classic sandwiches. However, no waffle fries are available.

I didn't get the chance to try any of the food listed above for 2 very good reasons:

1. The Orioles have one of the most liberal outside food/drink policies I've seen at Spring Training. Believe it or not, the laid-back atmosphere of spring training often doesn't apply to outside food/drink. I suspect a lot of this has to do with the fact these teams only get a few weeks out of the year to play to full-houses, and they want to maximize the dollars when they get the chance.

The only restrictions on drinks are that they must be in a plastic bottle, and cannot be alcoholic. Thus if you want to bring soda/gatorade/etc., knock yourself out. I was able to bring peanuts and cracker jacks into the park free of hassle. Pretty much the only limitation on food is the bag size restrictions.

2. I didn't have to bring a spread, because there was one waiting for me when I arrived. For $23 a person there is an all-you-can-eat picnic area in left field, that runs from the time the gates open, until about 10 minutes prior to first pitch. This includes Cheeseburgers, Hot Dogs, Slaw, Beans, Canned Sodas, Bottled Water, Chips, and Cookies. Even though I didn't bother to grab food for myself until near the end of the allotted time (and some items had run out), it was still worth it on the bottled water and sodas I was able to pocket on my way out. If you have tickets to an upcoming team, i'd highly recommend contacting the box office about adding this AUCE option, as it was well worth it. 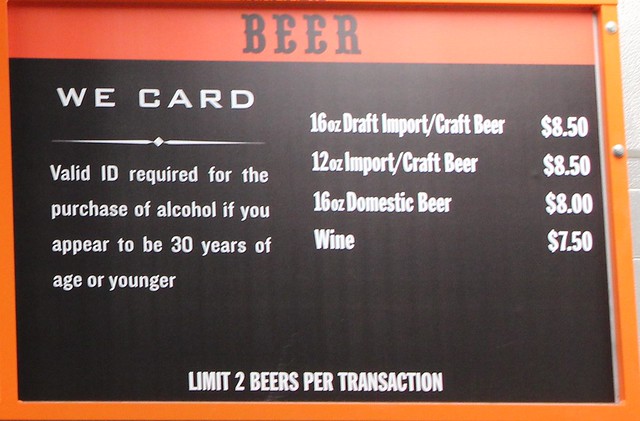 Above you see the bottled beer list, the (non-domestic) tap options, as well as the pricing. I did not get the chance to drink, as I was driving my kid home, but I note they have draft beer from a Sarasota brewery, as well as bottled beer from 3 Daughters Brewery in St. Pete. I'm really at a loss as to why there'd be enough demand for cider at a baseball game to justify a tap. Nonetheless, its pretty remarkable to see only a $.50 markup to go from a Bud to a Stella of comparable size. The beer men had a good choice of 16 ounce cans, including Bud, Bud Light, Miller Light, Corona, and Yuengling, and these were $8.

Though its not a rigidly-policed stadium like Steinbrenner field, there are several design elements that lower your chances of getting any one on one time with a player. the visiting team has a clubhouse beneath the stadium, meaning that unlike many other Spring Training sites, players don't have to walk past the fans. Additionally, both bullpens take up much of the foul ground from the foul poles, and from these the fan access is elevated about ten or so feet. The net result is that the layout itself doesn't really create opportunities for fan/player interaction beyond what you'd see at a normal regular-season game. Finally, if you're hoping to catch a home run, the only place this could be accomplished is straight-away left field.

This isn't to say that the stadium or its employees aren't fan friendly...its just that when placed in direct competition with places like Port Charlotte and Bradenton, it fails to meet a very high bar. And its still much more intimate than any regular season stadium.

- The stadium is gorgeous, and really evokes the feel of Camden Yards. 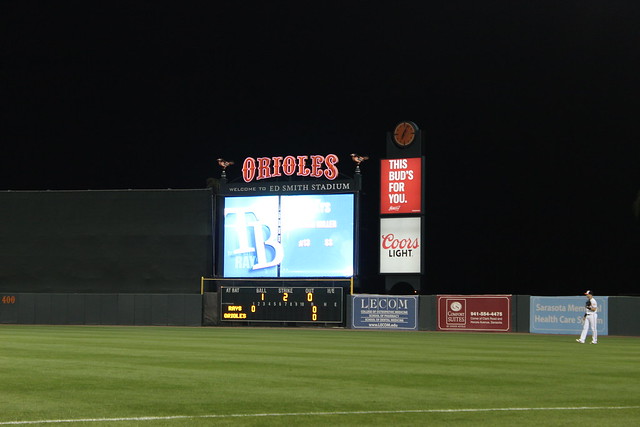 - The video scoreboard is huge, they show replays, and you don't have to look around to find the mph on the last pitch.

- As it is a closed concourse, they pump the Orioles radio broadcast throughout the concourse, meaning that if you miss any action, at least you get to hear what's going on. 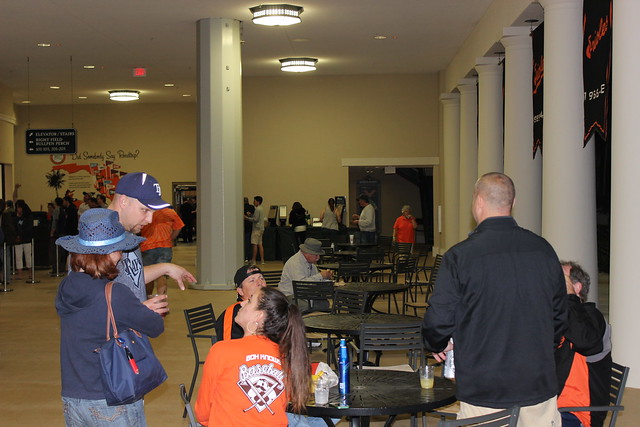 - There are many shaded picnic tables under the concourse, and I imagine as April nears, these would provide a nice respite on hot afternoon games.

- There is neither a berm, or a wrap-around concourse. The result is that there are very few decent options for the standing-room-only crowd, which basically get to stand down the right and left field lines. There are picnic tales down the lines, and under the concourse to compensate, but as good as the ticketed seats are, I would not show up without a seat.

- The great sight lines of the second level seats comes at the cost of very narrow and crowded walkways. In the inning breaks, and leading up to first pitch, it can take you 10+ minutes to get out of the seating bowl, and to where you want to go.

- Having been there in 2008, it was obvious that one of the elements that they didn't do much to renovate was the restrooms. choosing instead to expand things like concessions and merchandise. As a result, expect longer than normal wait times.

Florida is currently a wealth of riches with regards to Spring Training facilities: pretty much every stadium save Dunedin and Kissimmee was built, or majorly renovated within the last decade. Because of this, Ed Smith is somewhat middle-of-the-pack, in that there wasn't anything that made it remarkable in terms of its neighborhood,opportunities for player-fan interaction, and other unique features. However, the primary purpose of a stadium is still to provide a place to sit and watch a game, and in that respect Ed Smith Stadium excels. If you are looking for a Spring Training game-day experience where you arrive close to first-pitch, and experience great sight-lines in a beautiful park, this should be near the top of your list.