This may not come as earth-shattering news to most, but Drew Smyly has a home run problem, particularly against righties. I mean, so does the entire pitching staff of the Tampa Bay Rays, who's HR/9 rate and total number of home runs allowed rank in the top-10 worst in the major leagues this season. Their HR/FB ratio of 13.2% is also slightly above the league average of 12.9%. But still, Smyly's propensity to relinquish the long ball has been a growing development over the past couple of seasons, as his current total of 27 round trippers allowed is a career high and counting.

Smyly kick started the season on a high note in the month of April. Despite surrendering five home runs in 34.2 innings of work, Smyly concluded the month with a 2.60 ERA while striking out 41 batters and holding opposing hitters to a paltry .149 batting average and a .217 wOBA.

However, the next three months were not as kind to Smyly, as the home run avalanche rolled in ruthlessly. He threw 82.2 innings and was absolutely walloped as opposing hitters mashed 17 four baggers and hit for an average of .290 or better. His ERA for the month was an uninspiring 6.42.

Smyly had hit rock bottom after finishing July with a lackluster record of 2–8, including a stretch of four consecutive losses. But then the calendar turned to August, and with a change in season also brought significant change in Smyly's performance on the mound.

Smyly recorded his best ERA (3.03), batting average against (.179), wOBA (.241) and strikeout total (31) since April while pitching to a perfect record of 3–0 in five starts. So how did Smyly revitalize his season? Well, for starters he made a significant alteration to his arsenal of pitches. 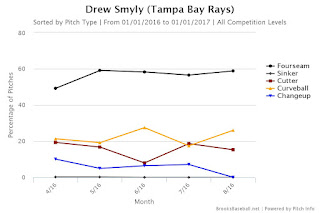 As shown in the above graph from Brooks Baseball, Smyly eradicated his changeup from his repertoire in the month of August, a pitch he predominantly tossed to righties. Even though the changeup was only a pitch he mixed in from time to time (he only threw it 5.69% of the time), the abolishment of the pitch was justifiable.

Opposing right handers made mincemeat out of the off-speed pitch through the first four months of the season. Righties hit an even .300 and clubbed a robust .533 ISO, including five home runs, against the changeup.

The subtraction of the changeup has certainly paid dividends, as Smyly's LD% has decreased quite noticeably from July's mark of 24.7% to August's 17.6%. His plan of attack against right-handed hitters did not change too much otherwise, as Smyly continued to dish out a steady diet of four-seam fastballs and "slow slurves" (Brooks Baseball categorizes the pitch as a curveball because of its lower velocity, but FanGraphs categorizes it as a slider because it has less depth than a curve, so I call it a slow slurve) while also mixing in his cutter.

His four seamer and his slurve continued to generate a solid volume of whiffs in August with there Whiff%'s of 13.31% and 17.07%, respectively. Smyly's average fastball velocity even gained an extra tick during the month, augmenting from approximately 90 mph to 91 mph, which is always a plus for any pitcher.

The biggest difference, however, can be found in Smyly's batted ball profile for the month. With a drop in LD% in August came a dramatic rise in his FB% (41.9% in July to 58.8%).

At first glance, this may sound off the alarms in our heads since we are dealing with an extreme fly ball pitcher who has been serving up homers on a silver platter. But do not fret, as Smyly did a much better job at limiting hard contact with his Hard% declining from 28.4% in July to 20% in August as well as creating weaker contact with his Soft% increasing from 17.9% to 27.1%. In addition, his IFFB% elevated from 15.4% to 18%. So Smyly improved on his ability to yield more lazy fly balls this month.

Smyly also located his heater more effectively in August. From April to July, his fastball location was brutal with the majority of his four seamers thrown right down Broadway. But in August Smyly began to throw his fastball more up in and out of the strike zone as exhibited in this heat map via FanGraphs below. 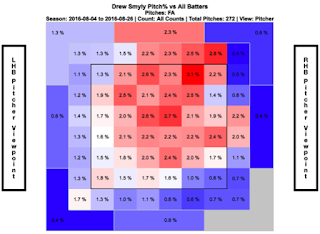 He also threw his slurve more down and out of the zone to batters during the month. By throwing those to pitches in those sectors of the strike zone, Smyly effectively changed the eye levels of batters and got them to swing and chase those high pitches more, which ultimately helped induce more of those cans of corn to his infielders and outfielders.

While in the short term this course of action may be successful for Smyly, I do not see this working in the long term for two reasons.

One, Smyly's fastball command is still poor. While he has been throwing the pitch more up in the zone, he still throws his fastball way too much down the heart of the plate. He is never going to blow hitters away with a fastball that only hits about 90 to 91 mph, so he is going to need to work on painting the inside and outside corners.

Two, is his cutter, the only pitch that I have not discussed yet. It is not a good pitch and it gets tagged rightfully so. Opposing batters are crushing the pitch to the tune of a .346 average and a .318 ISO with eight homers.

According to Brooks Baseball, his cutter has "little cutting action and has good 'rise'." He also throws it significantly slower than his four seamer at just 85.58 mph. Since his cutter has little movement and is thrown at a lower velocity, he is essentially throwing a slower version of his four seamer.

This makes matters worse since he pretty much only throws two different types of pitches at the moment, a fastball and a breaking ball. It would be extremely difficult for not just Smyly, but for any starting pitcher to have success if he only had two weapons to work with. Also, his command of his cutter is an issue.

That being said, I would not necessarily ditch the cutter. I think some simple tinkering with the pitch could make it more useful. I do think Smyly is going to need to incorporate another pitch down the road. Even if the cutter turns out to be a good pitch for him, I still think he needs to throw something that is either off speed or produces ground balls in order to counter act his other fly ball-heavy pitches.

Smyly has dabbled with a sinker in the past, and that might be a pitch he could revisit. Although there is a very limited sample size of the sinker, it has produced good ground ball numbers. Even though ground balls do not go for as many outs as fly balls do, they certainly go for less extra base hits.

In the meantime, however, we should focus on the positives with Smyly, in that he is making some adjustments in order to temper an issue that has plagued him all season long.