In which DRB chooses the Official Best Baseball Movie.

The idea for this series of articles started simply enough: with a tweet over the weekend from Rob Neyer.

I sometimes think of ways to divide people, but then realize it's a terrible way to live. Still, I don't "get" how people like FoD. At all. https://t.co/U6zsLADqFi

It’s true that, as popular as Field of Dreams is as a movie, it is polarizing among a lot of hardcore baseball fans. While it might be the "best" baseball movie to the casual fan (and non-fans), we wondered, would it carry the day at site like DRB?

So we decided to run a little tourney and have you help us to find out!

We grouped the best movies into brackets by category: Comedy, Drama, History, Family Fare. You'll get to vote on who advances, and we'll chat about the movies as we go along. 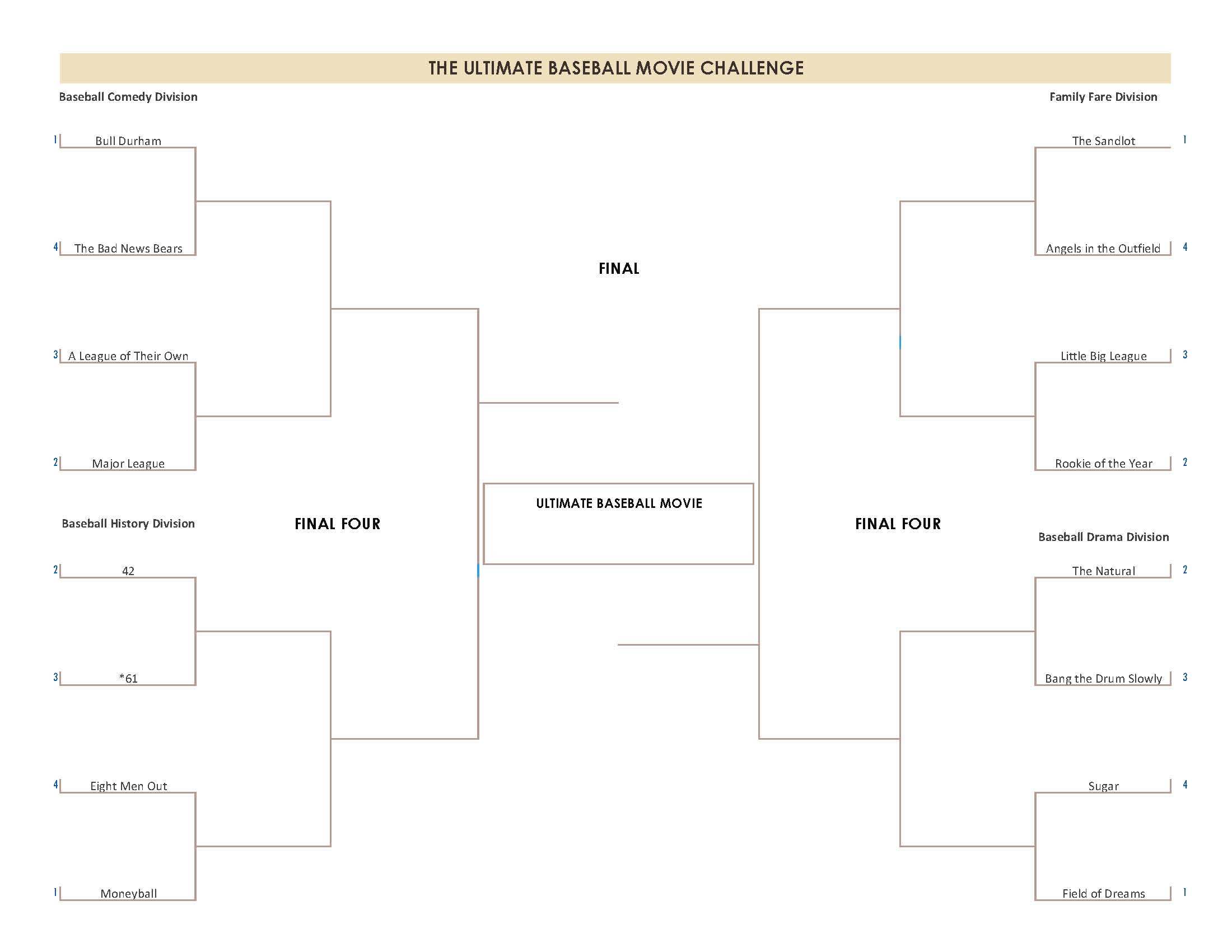 And we're going to get right to that... on Monday.

BUT BEFORE YOU VOTE!

Sadly (or not so sadly, in some cases) a lot of movies didn’t make the cut of 16. Sometimes it’s because the movies are old, and the baseball in old baseball movies is terrible. Those were automatically disqualified. Sometimes the category is just too stacked (Baseball Comedy is definitely a power conference). And sometimes it’s because... well, a lot of baseball movies just aren’t very good. While you’re mulling over which movies should advance to the Elite Eight, here are some that didn’t make the cut, along with a little bit about them and their fWAR from Rotten Tomatoes.

Holy cow! Before I started this article, I didn’t even know this movie existed. I don’t see how that’s possible. I mean, this is a movie with Richard Pryor, Billy Dee Williams, and James Earl Jones barnstorming their way through the Negro Leagues of the 1930s. How does no one ever talk about this movie? The Selection Committee erred mightily in slighting this fine film. I mean, lookit this thing!

Full disclosure: I haven’t seen this one. But like that kid you’ve read about who has been lighting up the radar gun in Low-A, I’m anxious for the day I can. It tells the story of rookie pitcher who develops Steve Blass Disease and gets sent to the minors to sort it out, with the help of an unorthodox therapist. It stars Ethan Hawke, Marin Ireland and Paul Giamatti.

This one I have seen, and it’s very good. This documentary on the fastball could have easily made the cut and been a contender in the History category. It’s worth watching for the segment on Bob Gibson alone. And it’s on Netflix right now, so you should watch it.

No sequels or remakes made the tourney, because they either (a) sucked or (b) didn’t totally suck but paled in comparison to the original.

A lot of the kids from the original BNB are back, but without Walter Matthau, it’s just not the same. Still, if you happen upon it while channel surfing, it’s not a bad way to kill an afternoon. The "let them play" scene is pretty great.

Tony Curtis is in this one, and it’s a trainwreck. AVOID.

Charlie Sheen, Tom Berenger, and Corbin Bernsen are back. We all wish they weren’t.

This movie is fine. I mean, it is unfortunately based on Al Stump’s suspect work, and I never really bought Tommy Lee Jones as Ty Cobb. But it’s fine. You won’t hate yourself for watching it.

Rays fans know the story of Jim Morris, the 40 year old science teacher/former big leaguer who gets a second chance. Dennis Quaid does a credible job as a pitcher, even if he does look a bit too old for the part. And while the movie takes some Disney-fied turns with Morris’s real-life story, it’s a good family time.

I haven’t seen this one, but after reading up on it, I’ve put it on my list. It’s based on the true story of baseball pitchers Rinku Singh and Dinesh Patel, who were discovered by their agent on a reality TV show. It stars Jon Hamm, Aasif Mandvi, Alan Arkin, Suraj Sharma, and Madhur Mittal.

Yes, the baseball is usually bad, and the camera work makes it look really dated. But some of these are still really good films.

Ray Milland in a Nutty Professor goes to the ballpark farce.

The Kid from Left Field (1953) - No Rotten Tomato Ratings

Dan Dailey, Anne Bancroft, Lloyd Bridges, and Billy Chapin star in goofy film about a kid who befriends the owner's niece to get his Dad's job back. Kid gets a job as batboy and ends up managing the team on a publicity stunt and they win the World Series (probably).

Angels in the Outfield (1951) - No Rotten Tomato Ratings

Oh, you didn't know there was one before the other one? This one starred Paul Douglas, Janet Leigh and Keenan Wynn. It was a comedy about the Pirates instead, but there were still real live angels in the outfield helping the team on to victory in hopes of getting their abusive manager to change his ways. That... that doesn't sound right.

In general, I hate serious baseball movies. Unless they’re biopics, just get over yourself. It’s just a game. Real life is serious enough.

Kevin Costner stars in another baseball movie, this time about a washed up pitcher hanging on. It’s well done, but no one needed this movie.

Can a movie with Clint Eastwood be terrible? Apparently, the answer is yes. This may be an okay movie for non-baseball fans, but for fans? Don’t walk, run. Away.

This movie gets more hate than it deserves. Is Tom Selleck convincing as a baseball player? Hell no. But is it a fun movie? Sure.

Does this qualify as a baseball movie? I don't know. It’s absurd and goofy, but I enjoyed it. It stars Trey Parker, Matt Stone and Dian Bachar.

Albert Brooks and Brendan Fraser star in a bad movie about a scout who discovers a troubled baseball player. But it’s almost so-bad-it’s-good?

This is not so-bad-it’s-good.

The rare baseball rom-com stars Freddie Prinz Jr. and Jessica Biel. The baseball is horrible, the story is worse, the acting is wooden. This is the movie that trainwrecks stop to look at.

The rare 0% Fresh from Rotten Tomatoes has a trained chimpanzee playing third base for a minor league baseball team. Stars a Friends-era Matt LeBlanc, though not as the chimp. At least, I don’t think so.

That's it for snubs and duds! Leave any movies you like that we left out in the comments, and I'll be back next week with a breakdown of the first round matchups.