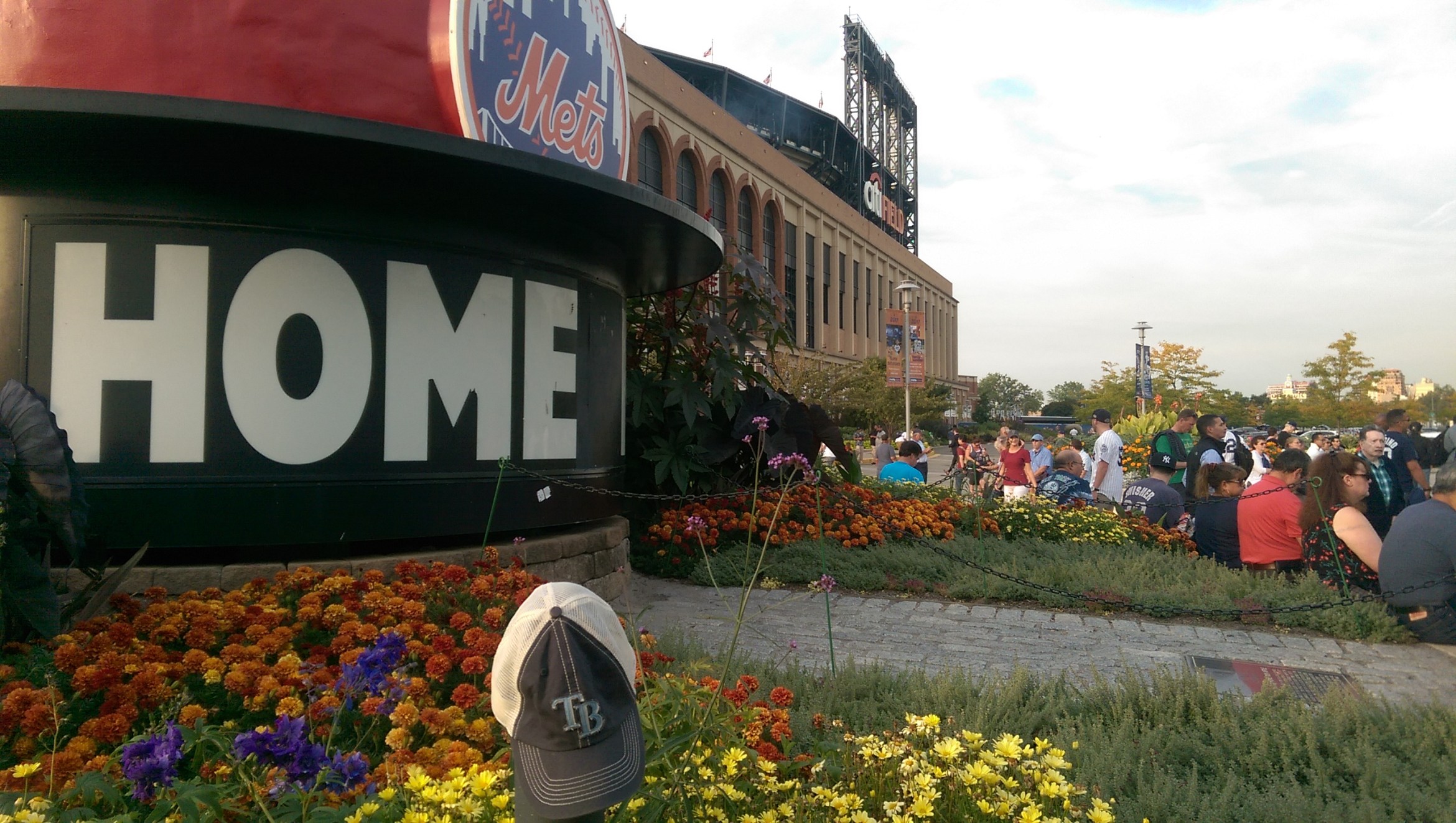 Full disclosure: I am not from Tampa Bay, nor have I ever lived there. I am from New York, grew up here before moving away and have lived in Westchester (same as Stu Sternberg!) since 2010. The Rays are my adopted team and have been for 20 years.

As an out of state fan, I've been to my fair share of Yankees-Rays games in the Bronx. Unlike many of you, I was thrilled when this series was relocated, giving me a chance to watch a Rays home game without getting on a plane. I had to go, so I brought along my parents and a couple friends to sit among 20,000 Yankee fans to root, root, root for the "home" team. Here's our story.

Let Me Set the Scene

Tickets to the game were $25, first come first served, anywhere in the lower bowl or a couple of the party decks. There were no fans sitting upstairs behind the plate. That was somewhat disorienting.

Also, the Mets are away all week because of The Meadows, a substantial music festival setting up in their parking lot. That made parking impossible for many fans, my parents among them. Thankfully, I came in from Manhattan on the subway and only had to walk past that mess.

When we got there, Yankee fans were lined up at every gate waiting to get in like locusts descending on a fresh harvest. My friends, family and I were five of the 25 Rays fans I counted all night. More people were wearing hockey gear than Rays gear. Several did give me props on my throwback, though. So, you know. Silver lining. 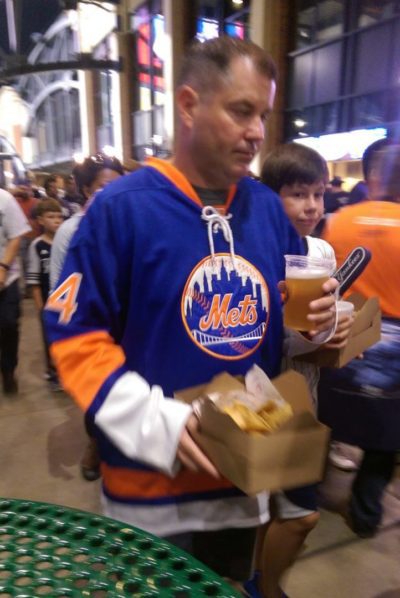 Lines would be a common theme all night. So many lines, for everything except the bathroom (ironically). Despite the stadium not being full, it took almost an hour to get food. Staffing must have been an issue on such short notice. Not only were all concessions undermanned, it looked like they brought every vendor out from retirement for the game. Three innings of a quick game we missed waiting for sausage. Each of us purchased two beers and that was it. Couldn't bear to get up and wait in that sea of humanity again.

The Rays Take The Field

We were late getting in so we missed the introductions, though they probably went exactly as you'd expect them to. Cheers for the visitors. No response for the home team. That's how it was with the walk-up music. When Tantric comes on the PA, I expect people to be excited. No dice.

Usually when I attend a Rays-Yankees game, it's in the Bronx. I'm always respectful of the home ballpark. This being a "neutral site" game, I let myself enjoy the experience a little more than usual. It did not sit well with the hundreds of Yankee fans in our section.

We started a Let's Go Rays chant in the 5th inning, with men on 1st and 3rd, and we're promptly booed. It was a surreal experience watching the home team get booed before they disappoint you. Hechevarria's home run was met with stunned silence, not the normal excited jubilation you'd expect from even a sparse Trop crowd. It was sad.

One fan even heckled me about championships after the final pitch. Don't believe me? Let's go to the video tape:

Dude, we haven't even been around for 20 years. Calm down. This is a regular season gift of a game for you guys.

As far as touches to make the team feel at home, they were few and far between. The tickets said "Mets" on them. The scoreboard in centerfield said "Mets." The YES Network feed was broadcast above our partially obstructed view seats. And, obviously the crowd wanted the Yankees to win. At least we got DJ Kitty on the 1s and 2s during the 7th inning stretch?

MLB did an extreme disservice to the contending (sort of) Rays by playing this series in New York. I understand logistics. Make it good. Give the Rays an extra home series against the Yankees next year. This was an atrocious display by a league that never gives this team any help (well, beyond revenue sharing, I guess). No, we're not a marquee franchise. We still deserve better if they ever want baseball to catch on in Tampa Bay.

Deja Vu All Over Again

This is actually the second time I have seen one of my favorite teams play a home game in a visiting stadium due to a hurricane. In 2005, I attended the New Orleans Saints "home opener" at Giants Stadium. At the time, I lived in New Orleans, and the entire city was underwater. Every resident dispersed across the country. When the team took the field, they were representing a place that didn't exist at the time. Fans like me were watching from afar, united in our passion for the Saints. I cried in my seat because the team wore a town on their sleeve that was left for dead.

While Irma may not have been as bad as Katrina (thankfully), it's still a reminder of the power of sports to unify. Even though I'm not from the area, I understand how sports and hurricanes interact and can appreciate what some of my fellow fans might be experiencing right now. It sucks. Yet I'm thrilled to know there's this one thing, regardless of background and circumstance, that we all rally behind. This one thing that levels us to equals cheering for civic pride or just the thrill of the game.

I sincerely hope every single one of you is saved from the rebuilding hell I had to go through post-K. And I hope we can all root for the home team, wherever they call home, as a way to bring us together, in times of trouble and prosperity. The Rays make us a community. Let's remember that always. 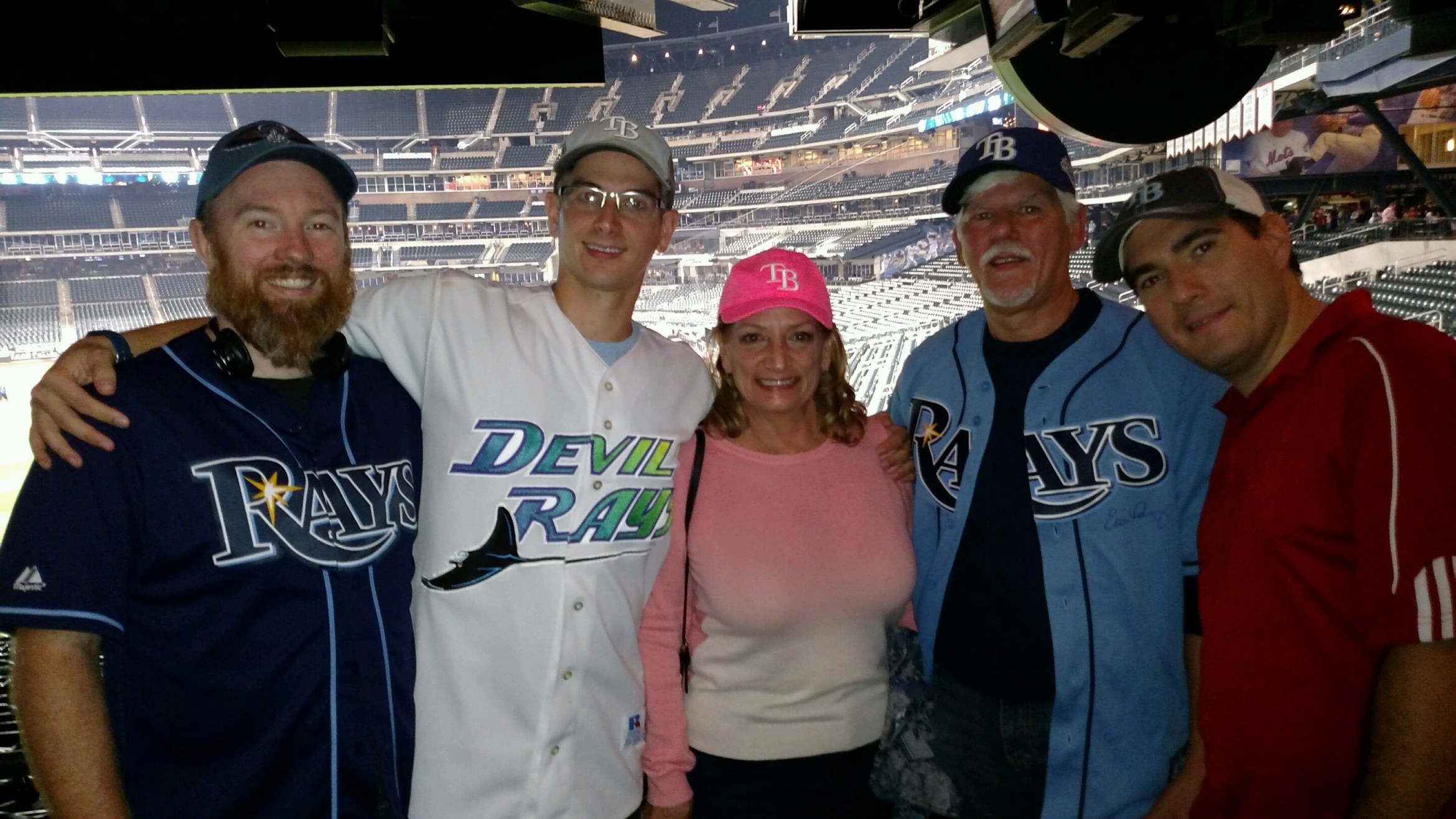 From everyone in our NY Rays contingent, we hope all of you down there are safe and that you got through the storm unscathed!