It's easy to come across Rays fans on any online message board commenting on Ryan Yarbrough's velocity. It seems to be the end-all-be-all answer to Yarbrough's struggles since 2021. 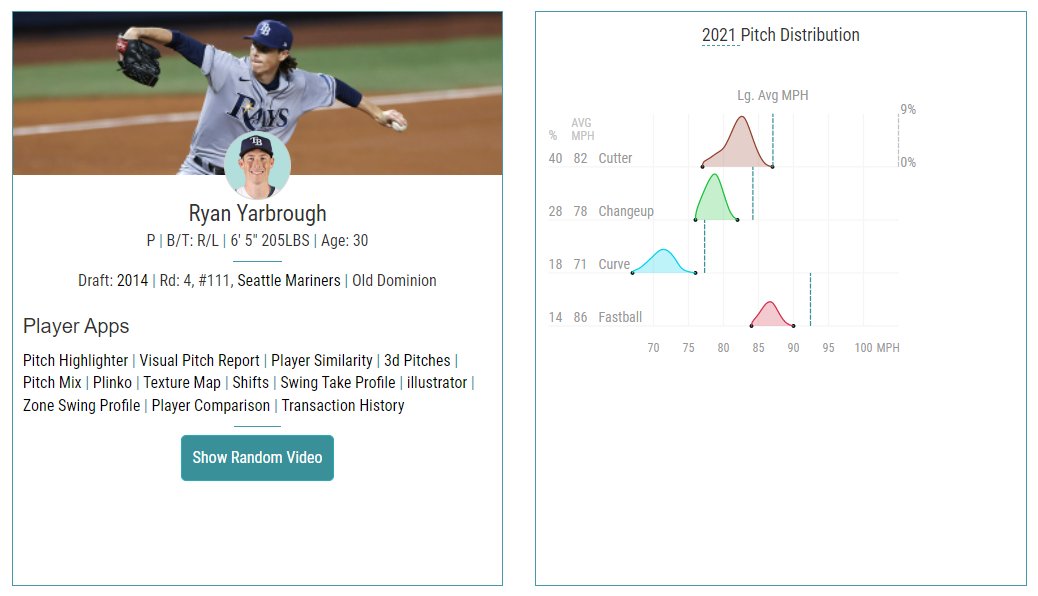 According to Baseball Savant, Ryan Yarbrough's velocities ranked in the first percentile of all starters in the MLB in 2021... Dead last. Compare this to Yarbrough's best season, 2020, where he was at least able to get his velocities ranked... First Percentile? Again? With a cutter that only clocked at 83 MPH?

Yes, the title clearly says the problem is not his velocity. 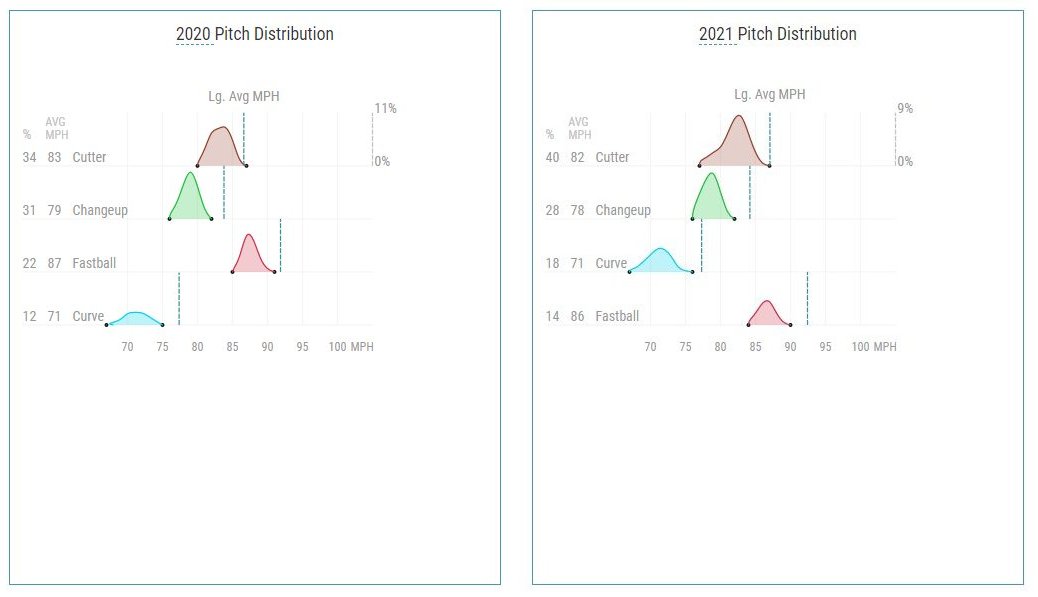 There was only a different of a single mile per hour between his three most used pitches. Over a sample size of several hundred pitches. His curveball rated at the same velocity between both years. It's overly reductive to credit Ryan Yarbrough's struggles to a drop in velocity. Even if 2020's sample size is too small for you to consider, Ryan Yarbrough's cutter velocity in 2019 still only clocked at an average of 84 MPH.

Comparing where Ryan Yarbrough ranks among pitchers between 2020 and 2021, via Baseball Savant

Here we can see what Ryan Yarbrough did well in both years (Avg Exit Velocity and HardHit%), what he's never needed to succeed at (Faseball velocity, either spin rate, strikeout rate, or expected batting average.)

The categories where we saw decline are the ones which are the most tied to real world result for Yarbrough. Barrel%, and Whiff%... and those lead to declines in expected results such as xwOBA xERA, and xSLG.

Yarbrough in 2020 was able to miss the barrel at a healthy above average rate (65th percentile), and that dropped to an exactly average rate (50th percentile.) Yarbrough does not have the stuff to throw a pitch directly at the barrel of a bat, break the bat, and have the ball weakly drop in an outfielders glove. However, this may also be a symptom rather than a cause.

There are two red dots I did ignore, for good reason. The first is BB%, which Yarbrough actually improved at from 2020 to 2021... but that may be the key to his struggles. Yarbrough's chase rate was 98th percentile in 2020, but dropped to a still elite 85th percentile.

The biggest drop Yarbrough had in any of these categories was whiff%, dropping from the 56th percentile to the 16th percentile.

To those who may feel that whiff% and chase rate are redundant, here is the difference. Chase rate is how often opposing batters swing at pitches outside of the zone. Yarbrough remained extremely capable (perhaps even elite) at inducing batters to do this, even with a decline in 2021. Meanwhile, whiff% is simply the number of times a batter swings and misses compared to the number of times they swing at all.

So, if Yarbrough is still capable at getting batters to swing at pitches outside of the zone, but they're hitting the ball much more often for every swing they take... then Yarbrough's key problem is that he is filling up the zone too much. 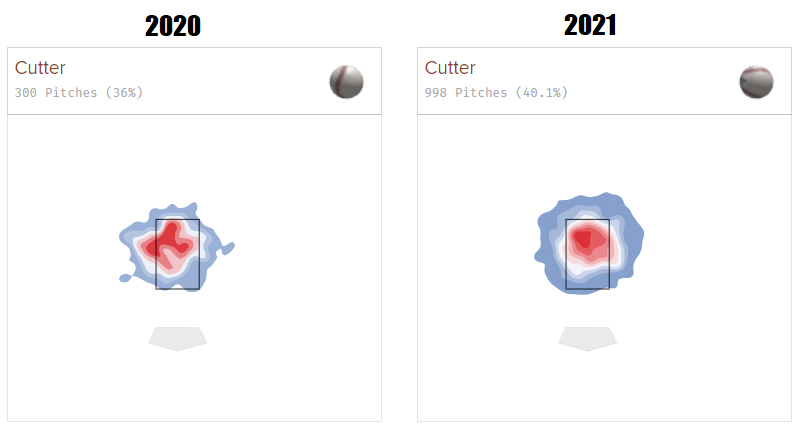 Yarbrough's cutter in 2020 to 2021. Thrown far less outside of the zone. Credit Baseball Savant.

It's also worth noting that "chase rate" doesn't even mean that these batters miss the ball. Yarbrough was not getting batters to swing and miss at balls outsize the zone, he was getting them to swing at pitches outside the zone that led to outs by having them hit the ball weaker with the top of the bat. In 2020, batters slugged .461 against Yarbrough's cutter.

In 2021, batters slugged .582 against the cutter. By throwing it down the middle, he's practically putting the ball on a tee for batters.

It's also worth noting that Yarbrough practically only throws his cutter against right-handed batters, and this has to be the primary culprit. Yarbrough surrendered a .680 OPS to righties in 2020 compared to .798 OPS in 2021, despite his numbers against lefties improving between those years... (.685 OPS in 2020 to .623 OPS in 2021.)

So is that it? Is that how the Rays are going to fix Yarbrough? Have him return to the approach of getting batters to swing at something just off the plate to induce more favorable results? 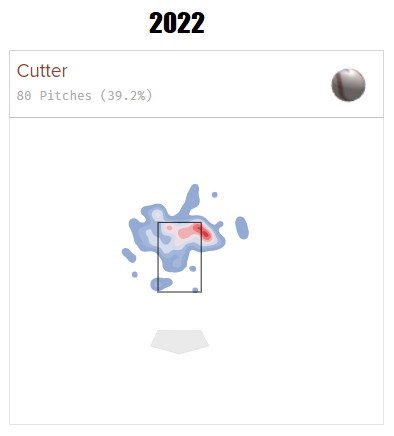 The cutter in 2022. Via Baseball Savant.

In his three starts in 2022, he has used the cutter seemingly to jam batters inside. Outside of the nightmare first inning in his first start back from the injury, Yarbrough has looked... a little better in 2022. He pitched very admirable in his start in Seattle. Yarbrough will be relied upon at least until Baz and Patino are heathy again, and perhaps longer.

I'll admit, I have been and remain pessimistic on Yarbrough. I believed he'd be non-tendered in my preseason preview in December. I was apoplectic after his first start in Oakland and declared he had nothing left as a starter. It was not always this way: Yarbrough was my favorite pitcher to watch on the team in 2019. His play from May to August looked near-ace quality, and he and Morton kept the rotation afloat after injuries to Chirinos, Snell, and Glasnow threatened to derail the season. I've also always known velocity was not the problem, I've had his Savant page bookmarked for over a year now.

However, we need to likely accept that Yarbrough will have a spot on the back half of the rotation for a bit. Patino and Baz coming back likely won't get rid of him immediately, as they'll need time to build up. Talented prospects like Tommy Romero and Taj Bradley are not ready for a rotation spot. Josh Fleming, who is also a soft-tossing lefty, has his own issues on the mound to work out.

If Yarbrough can throw the cutter how and where he needs to, on the edges sides of the plate, his other pitches will be more effective. He'll be able to serve a role of throwing 4 to 5 innings, never seeing the lineup two full times, at the back of the rotation. That's all we need.